Born on the Fourth of July (film)

Born on the Fourth of July (film)

Infobox Film
name = Born on the Fourth of July 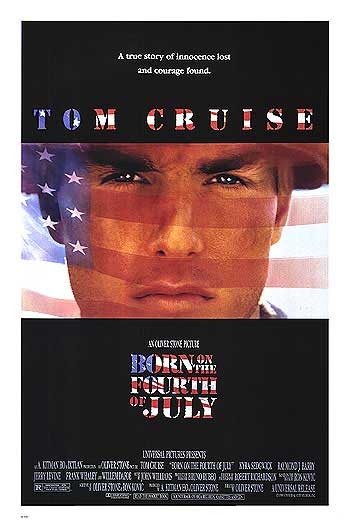 "Born on the Fourth of July" is a 1989 of the of the same name by Vietnam War veteran . plays Kovic, in a performance that earned him his first nomination. (himself a Vietnam veteran) co-wrote the with Kovic, and also produced and directed the film. Stone wanted to film the movie in , but because relations between the United States and Vietnam had not yet been normalized, it was instead filmed in the .

"Born on the Fourth of July" is considered part of Oliver Stone's "trilogy" of films about the Vietnam War — along with "Platoon" (1986) and "Heaven & Earth" (1993). The film was given for Best Director and Best Film Editing.

The film opens when is a young boy living in , , New York. He grows up in a patriotic and household, instilling within him a strong sense of in his country and his . As a teenager, and a top member of his 's team, he proves himself physically fit and athletic, as well as an exceptional academically. When local Marine recruiting NCOs visit his school and give Ron and his fellow seniors an impassioned about the Corps, Ron decides to enlist. He misses his , because he is unable to secure a date with his love interest, Donna. He confronts her at the prom and has a dance with her on his last night before leaving.

The film then moves to Kovic's second tour in 1968. Now a Marine and on patrol, his unit a of Vietnamese citizens, believing them to be enemy ants. During the retreat, Kovic becomes disoriented and accidentally shoots one of the new arrivals to his , a younger Marine , named Wilson, who ends up in the line of firing between sides. Despite the frantic efforts of the Navy Corpsman present who try to save him, Wilson later dies from his wounds, this action leaves a deep impression on Kovic. Overwhelmed by guilt, Kovic appeals to his (XO), who merely tells him to forget the incident. The meeting has a negative effect on Ron, who is crushed at being brushed off by his XO.

The platoon goes out on another hazardous patrol a few weeks later. During a , Kovic is critically ed and trapped in a facing sure death, until a fellow Marine rescues him. Paralyzed from the mid-chest down, he spends several months recovering at the Veterans Administration . The living conditions in the hospital include; s that crawl freely on the floors, a staff that is generally apathetic to their patients' needs, s that visit the patients infrequently, drug use that is rampant, and equipment that is too old and ill-maintained to be useful. He desperately tries to walk again with the use of and s, despite repeated warnings from his doctors. However, he soon suffers a bad fall that causes a compound fracture of his thighbone. The injury nearly robs him of his leg, and he vehemently argues with the doctors who briefly consider resorting to .

Ron returns home, permanently in a , with his leg intact. At home, he begins to alienate his family and friends, complaining about students staging rallies across the country and burning the American flag. Though he tries to maintain his dignity as a Marine, Ron gradually begins to become disillusioned, feeling that his government has betrayed him and his fellow Vietnam Veterans. In Ron's absence his younger brother Tommy has already become staunchly anti-war, leading to a rift between them. His highly religious mother also seems unable to deal with Ron's new attitude as a resentful, paralyzed veteran. His problems are as much psychological as they are physical and he quickly becomes alcoholic and belligerent. During an Independence Day , he shows signs of post-traumatic stress when s explode and when a in the crowd starts crying. He reunites with his old high school friend, Timmy Burns, who is also a wounded veteran, and the two spend Ron's birthday sharing war stories. Later, Ron goes to visit Donna at her college in . The two reminisce and she asks him to attend a for the victims of the . However, he cannot do so, because his chair prevents him from getting very far on campus because of curbs and stairways. He and Donna are separated after she and her fellow students are captured and taken away by the police at her college for demonstrating a protest against the Vietnam War.

Ron's disillusionment grows severe enough that he has an intense fight with his mother after returning home drunk one night after having a barroom confrontation with a veteran that fought on Iwo Jima who expressed no sympathy to Ron. Ron travels to a small town in ("The Village of the Sun") that seems to be a haven for paralyzed s. After venting his rage at his mother's embarrassment over having a disabled son, he has an emotional conversation with his father, and he later leaves home for good. He has his first sexual experience with a he believes he's in love with. Ron wants to ask her to marry him but when he sees her with another customer, the realization of real love versus a mere physical sexual experience sets in, and he decides against it. Hooking up with another wheelchair-bound veteran, Charlie, who is furious over a prostitute mocking his lack of sexual function due to his severe wounding in Vietnam, the two travel to what they believe will be a friendlier village. After annoying their taxicab driver, they end up stranded on the side of the road. They quarrel and fight, knocking each other out of their wheelchairs. Eventually, they are picked up by a man with a truck and eventually driven back to the "Village of the Sun". On his way back to Long Island, Ron makes a side trek to Georgia to visit the parents and family of Wilson, the Marine he believes that he killed during his tour. He tells them the real story about how their son died and confesses his guilt to them. Wilson's widow, now the mother of the deceased soldier's toddler son, admits that she cannot find it in her heart to forgive him for killing her husband, but God just might. Mr and Mrs. Wilson, however, are more forgiven and even sympathetic to his predicament and suffering, because Wilson's father fought in the Pacific Theater during World War Two and is even disillusioned with the war in Vietnam. In spite of the mixed reactions he receives, the confession seems to lift a heavy weight from Ron's .

Ron joins (VVAW) and travels to the in Miami. He and his compatriots force their way into the during 's acceptance speech and cause a commotion that makes it onto the national news. Ron himself tells a reporter about his negative experiences in Vietnam and the VA hospital conditions. His interview is cut short when guards eject him and his fellow vets from the hall and attempt to turn them over to the police. They manage to break free from the police, regroup, and charge the hall again, though not so successfully this time. The film ends with Kovic speaking at the , shortly after the of his autobiography "Born on the Fourth of July".

The reviews of the film were extremely positive. As of April 1, 1990, the review aggregator Rotten Tomatoes reported that 88% of critics gave the film positive reviews. Roger Ebert gave the film "four stars" and calling it "One of the best films of the year". Metacritic reported that the film had an average score of 75 out of 100. The New York Times says that "It is a film of enormous visceral power with, in the central role, a performance by Tom Cruise that defines everything that is best about the movie".

The most prominent theme of the film centers on the physical and mental anguish Kovic suffers. He is robbed of his ability to walk, a particularly vicious wound since he was an athlete in high school. He is also unable to have "normal sex" due to his paralysis, and can never have children.

The mental stress that Ron experiences, specifically , is not uncommon among Vietnam veterans. Along with his guilt over shooting his fellow Marine, he must also come to terms with combat situations that required him to kill not only North Vietnamese soldiers but also innocent civilians. As we see during the July 4 birthday celebration the town veterans association holds for him, he can't shake the reminders of combat, like the crying infant or fireworks that sound like gunfire or hand grenades. It also shows the pain he endures from the American government for not listening to the veterans about the conditions in the hospitals.