Jeans Revolution
"Denim Revolution" redirects here. It is not to be confused with a revolution in fashion caused by jeans.. 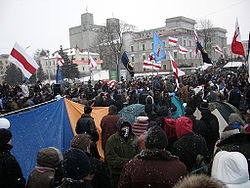 A meeting of opposition after the presidential election. October Square on March 21, 2006.

The Jeans Revolution (Belarusian: Джынсавая рэвалюцыя, transliteration: Džynsavaja revalucyja, Russian: Джинсовая революция) was a term used by the democratic opposition in Belarus and their supporters in the West to describe their effort and aspirations[1] as regarding democratic changes in Belarus at the presidential elections of 2006. It was also later dubbed Cornflower Revolution (васильковая революция, in Russian media) and Denim Revolution, both referring to the blue color, in parallel with other color revolutions; however, unlike them, it did not bring radical changes to Belarusian politics and society.

The term was coined after a September 16, 2005 public demonstration against the policies of Alexander Lukashenko. (On September 16, 1999, popular opposition leader Viktor Gonchar disappeared; the present head of SOBR, Dmitri Pavlichenko, is suspected by the Council of Europe to be linked to Gonchar's disappearance.[2]) The Belarusian police seized the white-red-white flags used by the opposition and banned in the state, and an activist of the youth movement Zubr, Mikita Sasim (Belarusian: Мiкiта Сасiм, Russian: Никита Сасим), raised his denim shirt (commonly called "jeans shirt" in Russian), announcing this will be their flag instead.[3] This spontaneous incident was recognized to have a symbolic meaning. In the former Soviet Union jeans were a symbol of the Western culture, and hence jeans were immediately recognized by Belarusian opposition as a symbol of protest against Lukashenko's Soviet-like policies, as well as the symbol that Belarusians are "not isolated" (from the West)[4] Subsequently, Zubr suggested to wear jeans on 16th day of each month, in remembrance of alleged disappearances in Belarus. 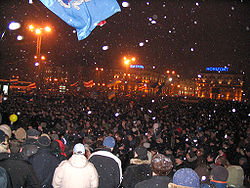 The term "Jeans Revolution" was brought to worldwide attention in reference to the demonstrations held in Minsk, the capital of Belarus, disputing the Belarusian presidential election, 2006. Up to 40,000 protesters gathered in October Square on March 19, 2006, it is believed.

The protest against the outcome of the March 19 election began as soon as polls closed late Sunday, with more than 10,000 people gathering in the square. The protest dwindled since then. Each evening saw a smaller and smaller gathering—5,000 on Monday, 3,000 to 4,000 on Tuesday. As of March 23, only about 200 mostly youthful protesters remained concentrated around the opposition's tent camp erected on October Square in Minsk. [1]

The white-red-white flag used by the protestors.

On March 24, authorities sent in riot police to clear out the makeshift tent camp in October Square and told them to disperse. State television emphasized a report from city police stating that no one was hurt in the operation. Some observers said the relatively gentle treatment of demonstrators suggested that Belarusian president may be attempting to react more sensitively given Western opinion. [2]

President Alexander Lukashenko earlier announced that protests similar to what occurred during the Orange, Rose and Tulip Revolutions will not take place in Belarus, stating that "force will not be used" to claim the presidency. Belarus authorities vowed to crush unrest in the event of large-scale protests following the election. Despite the government's prediction, the rally after the election was the biggest the opposition had mustered in years, reaching at least 10,000, according to AP reporters' estimates.

On March 20, Alaksandar Milinkievič told to 7,000 supporters (smaller than Sunday's gathering) that they faced a long haul with their protests: "We, free people of Belarus, will never recognise the election. They are afraid of us. Their power is based on lies." However, Lukashenko renewed charges that his rivals had planned pro-Western revolts like those in ex-Soviet Ukraine and Georgia. "Let me say that the revolution that so many people talked about and some were preparing, has failed and it could not be otherwise," he stated during the news conference on his victory.

On March 25, the 45,000 protesters in Belarus met police that did not clash with them, because they were waiting for riot police, but they did not interfere. However, moving on, the protesters clashed with riot police and were eventually driven back. The riot police arrested more than 100 people along with Alexander Kozulin, a supporter of the protests and a candidate against Lukashenko. Kozulin was allegedly assaulted by the police during his arrest [5] and on July 14, 2006, was sentenced to five and a half years imprisonment for his actions in the protests.[6]

Also, on the 25th, Milinkevich stated that he hoped for a month long cease in protests, apparently hoping that he could build up opposition and calm angst.

The opposition movement, especially the post-election protests, was documented by Belarussian filmmaker Yury Khashchavatski in his film Kalinoŭvski Square.