The Judicial Yuan also supervises the lower courts, which consist of the Supreme Court, the high courts, district courts, the Administrative Court, and the Commission on the Disciplinary Sanctions of Public Functionaries.[1]

According to Articles 77 and 78 of the Constitution of the Republic of China,[1] Article 5 of the Additional Articles of the Constitution,[2] Articles 30, 43, and 75 of the Local Government Systems Act, the major functions of the Judicial Yuan are as follows:[3]

Each District Court may establish one or more summary divisions for the adjudication of cases suitable for summary judgment. The civil summary procedure is for cases involving an amount in controversys of not more than 300,000 New Taiwan dollar and for simple legal disputes.[4] Currently there are a total of 45 divisions in Taiwan.[4] Additionally, there is a Taiwan Kaohsiung Juvenile Court, established in accordance with the Law Governing the Disposition of Juvenile Cases.[4]

Each of the District Courts has civil, criminal and summary divisions and may establish specialized divisions to handle cases involving juveniles, family, traffic, and labor matters as well as motions to set aside rulings on violations of the Statute for the Maintenance of Social Order.[4] Each division has a Division Chief Judge who supervises and assigns the business of the division. Each District Court has a Public Defenders' Office and a Probation Officers' Office.[4]

There is one High Court in the Taiwan area with four branch courts in Taichung （台中）, Tainan （臺南）, Kaohsiung （高雄）, and Hualien （花蓮）. In the Fuchien area, there is a Kinmen Branch Court of the Fuchien High Court. The High Courts and its branches exercise jurisdiction over the following cases:[5]

Cases before the High Courts or its Branch Courts are heard and decided by a panel of three judges. However, one of the judges may conduct preparatory proceedings.[5]

The Supreme Court is the court of last resort for civil and criminal cases. Except for civil cases involving amounts not exceeding NT $1,500,000 and petty offences enumerated in Article 376 of the Code of Criminal Procedure, any civil or criminal case may be appealed to the Court. This Court exercises jurisdiction over the following cases:

Article 80 of the Constitution states that Judges shall be above partisanship and shall, in accordance with law, hold trials independently, free from any interference.[1] Furthermore, Article 81 states that Judges shall hold office for life.[1] No judge shall be removed from office unless he has been guilty of a criminal offense or subjected to disciplinary measure, or declared to be under interdiction.[1] No judge shall, except in accordance with law, be suspended or transferred or have his salary reduced.[1] Judges shall be appointed from those persons who have passed the Examination of Judicial Officials, completed the Training Course for Judicial Officials and possessed distinguished records after a term of practice.[3]

Justices of the Constitutional Court

The Justices of the Constitutional Court (also known as the Council of Grand Justices) provides rulings on the following four categories of cases:

A petition for an interpretation of the Constitution shall be filed in the following circumstances:[3] 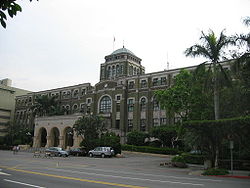 The Judicial Yuan is located directly east of the Presidential Office in Zhongzheng District, Taipei City.