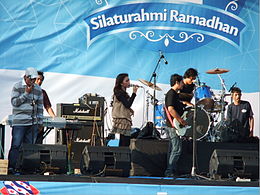 Dangdut is a genre of Indonesian popular music that is partly derived from Malay, Arabic, and Hindustani music. It developed in the 1970s among working-class Muslim youth, but beginning in the late 1990s reached a broader following in lower class Indonesians[1], Malaysia, and the southern Philippines.[2][3]

A dangdut band typically consists of a lead singer, male or female, backed by four to eight musicians. Instruments usually include a tabla, mandolin, guitars, and synthesizers. The term has been expanded from the desert-style music to embrace other musical styles.[2] Modern dangdut incorporates influences from Middle Eastern pop music, Western rock, house music, hip-hop music, contemporary R&B, and reggae.[2][4]

The term dangdut is a Javanese-language onomotopoeia for the sound of the tabla (also known as gendang) drum, which is written dang and ndut.

Most major cities, especially on Java, have one or more venues that have a dangdut show several times a week. The concerts of major dangdut stars are also broadcast on television.

Beginning in 2003, certain dangdut musicians became the focus of a national controversy in Indonesia regarding performances by singer Inul Daratista that religious conservatives described as pornography. Street protests called for Daratista's banning from television, and legislation was passed in 2008 by the People's Consultative Assembly that introduced a broad range of activities described as pornography.[5]

Because the popularity of the genre, some movies and TV show have dangdut-centered themes, such as Rhoma Irama's movies and Rudy Soedjarwo's Mendadak Dangdut.

Leading dangdut artists include the following: