Clydesdale Bank is one of three Scottish commercial banks which have the right to issue their own banknotes. 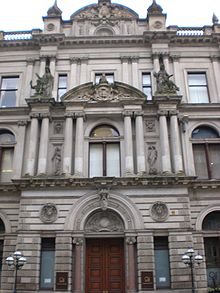 The headquarters of Clydesdale Bank in St Vincent Place, Glasgow

The Midland Bank later sold its UK subsidiaries, including the Clydesdale Bank, to NAB in 1987. The bank became part of NAB's UK and Irish subsidiaries including Northern Bank in Northern Ireland and National Irish Bank (N.I.B.) in the Republic of Ireland. In 1990 the Yorkshire Bank also became part of the group.

In the 1970s the Clydesdale Bank became a pioneer in the use of automated banking, including the widespread introduction of "AutoBank" ATMs and keypads at branch counters. A new corporate identity (with a new "CB" logo and a mustard-yellow colour scheme) was also introduced.

In 2001, the NAB Group transferred the assets and liabilities of the Yorkshire Bank to the Clydesdale Bank as part of a reorganisation of its British businesses by amalgamating two banking licences into one. The National Australia Group Europe Act 2001 was a private Act of Parliament passed to facilitate the transfer. Yorkshire Bank is now a trading name of the Clydesdale Bank in England.

In July 2007 Clydesdale Bank became the main sponsor of the Scottish Premier League in an £8 million four-year agreement.

Up until the middle of the nineteenth century, privately owned banks in Great Britain and Ireland were permitted to issue their own banknotes, and money issued by provincial Scottish,[1] English, Welsh and Irish banking companies circulated freely as a means of payment.[2] While the Bank of England eventually gained a monopoly for issuing banknotes in England and Wales, banks in Scotland and Northern Ireland retained the right to issue their own banknotes and continue to do so to this day. In Scotland, Clydesdale Bank, along with Royal Bank of Scotland and Bank of Scotland, still prints its own banknotes.

The previous series of Clydesdale notes each depicted a notable person from Scottish history:[4]

An image of Adam Smith also features on the £20 note issued in 2007 by the Bank of England, granting Smith the unique status of being the only person to feature on banknotes issued by two different British banks, and the first Scot to appear on a Bank of England banknote.[5]

The Clydesdale Bank ceased issuing £1 notes in the late 1980s. These latterly had an image of Robert the Bruce, whilst the contemporaneous £20 notes had an image of Lord Kelvin.

The £10 notes issued from 1971 bore an image of Scottish explorer David Livingstone with palm tree leaves and an illustration of African tribesmen on the back.[6] A later issue showed Livingstone against a background graphic of a map of Livinstone's Zambezi expedition, showing the River Zambezi, Victoria Falls, Lake Nyasa and Blantyre, Malawi; on the reverse, the African figures were replaced with an image of Livingstone's birthplace in Blantyre.[7]

Occasionally the Clydesdale Bank issues special commemorative banknotes to mark particular occasions or to celebrate famous people. These notes are much sought-after by collectors and they rarely remain long in circulation. Examples to date have included:[8][9]

In March 2005, Clydesdale Bank became one of the official partners of the Scottish Commonwealth Games Team, at the 2006 Commonwealth Games in Melbourne, Australia. This sponsorship builds on the relationship formed by its parent, NAB Group, who are one of the Games' main sponsors as well as a key partner with the Australian team, whilst the sister company, Bank of New Zealand, has joined forces to support its national team. The bank also released a series of Ten Pound (£10) notes with a Commonwealth Games related theme for the occasion. The bank is a major sponsor of the Glasgow 2014 Commonwealth Games.