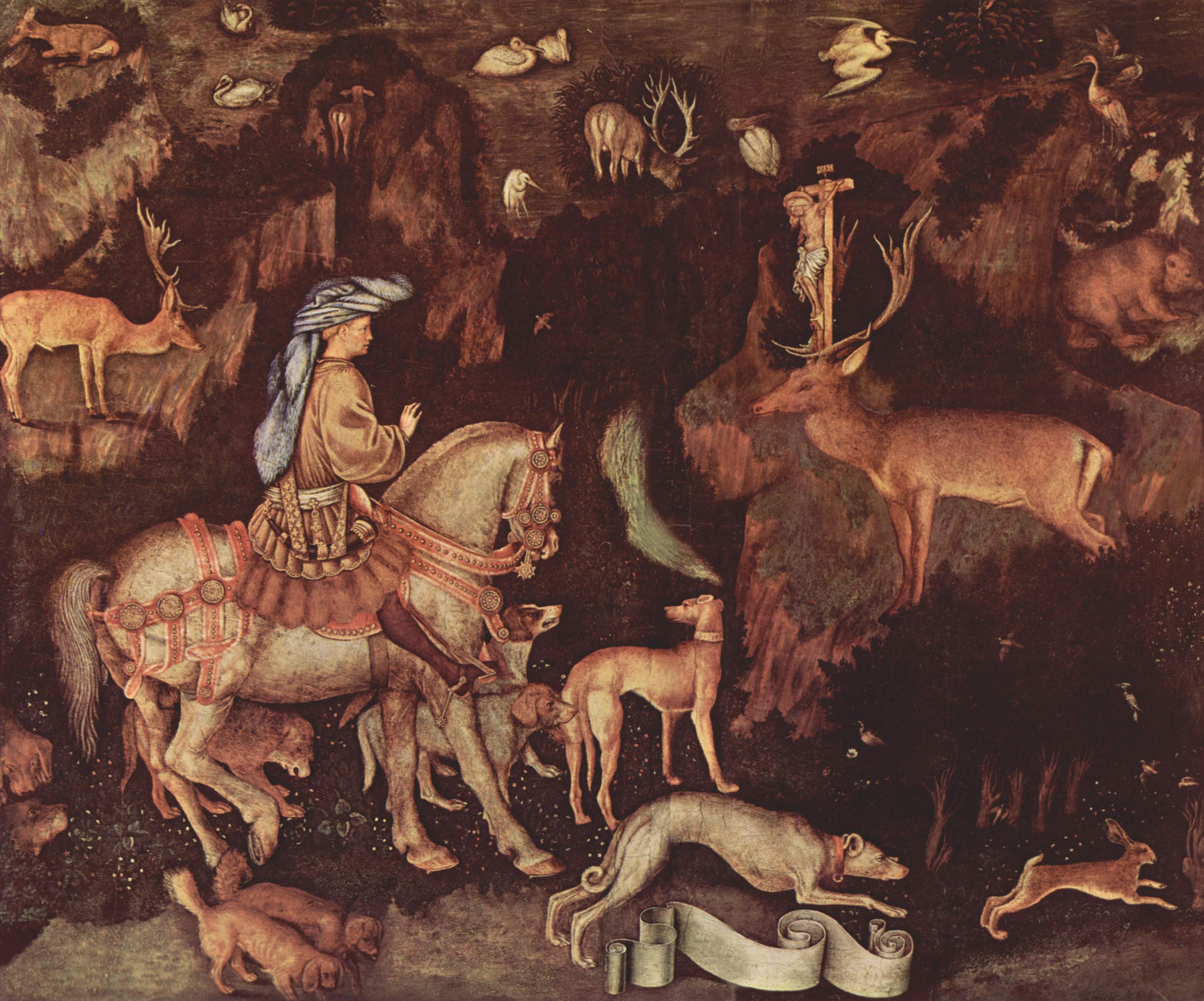 Saint Eustace, also known as Eustachius or Eustathius, was a legendary Christian Martyr who lived in the AD. A martyr of that name is venerated as a saint in the , which, however, judges that the legend recounted about him is "completely fabulous." ["Martyrologium Romanum" (Libreria Editrice Vaticana, 2001 ISBN 88-209-7210-7)] For that reason removed from the to be commemorated liturgically worldwide on the former feast of "Saint Eustace and Companions". ["Calendarium Romanum" (Libreria Editrice Vaticana, 1969), p. 139]

Prior to his conversion to Christianity, he was a Roman general named Placidus, who served the emperor . While hunting a stag in Tivoli near Rome, Placidus saw a vision of between the stag's antlers. He was immediately converted, had himself and his family baptized, and changed his name to Eustace (meaning "good fortune" or "fruitful"). A series of calamities followed to test his faith: his wealth was stolen; his servants died of a plague; when the family took a sea voyage, the ship's captain kidnapped Eustace's wife; and as Eustace crossed a river with his two sons, the children were taken away by a wolf and a lion. Like Job, Eustace lamented but did not lose his faith. He was then quickly restored to his former prestige and reunited with his family; but when he demonstrated his new faith by refusing to make a pagan sacrifice, the emperor, , condemned Eustace, his wife, and his sons to be roasted to death inside a bronze statue of a bull or an ox, in the year AD 118.

Veneration and Diffusion of Cult

The story was popularized in 's "" (c. 1260). Eustace became known as a of hunters, and also of anyone facing adversity; he was traditionally included among the .

As with many early , there is little evidence for Eustace's existence; elements of his story have been attributed to other saints (notably the Belgian ).

St Eustace's feast day in the was . ["Martyrologium Romanum" (Libreria Editrice Vaticana, 2001 ISBN 88-209-7210-7)] In addition, Saint Eustace and his companions were included in the Roman Catholic Calendar of Saints who were to be commemorated wherever the is celebrated, but that commemoration was removed in 1969 because, in view of the fabulous character of his "Passio," scarcely anything is known of the saint. ["Calendarium Romanum" (Libreria Editrice Vaticana), p. 139] Traditional Roman Catholics continue to celebrate the feast of "St Eustace and Companions, Martyrs" on . [See the , the , and the ] Many Roman Catholics worldwide still venerate Saint Eustace and the overall.

He is one of the of , . Scenes from the story, especially Eustace kneeling before the stag, became a popular subject of religious art. Early artistic depictions of the legend include a wall painting at and windows at the . There is a Church of Saint Eustace in , and the island of in the is named after him.

*, an island named after him.
*
*, film inspired by Saint Eustace.
*, another saint with a similar legend.