The Hawaiʻi Belt Road is a modern name for the Māmalahoa Highway and consists of Hawaiʻi state Routes 11, 19, and 190 that encircle the Island of Hawaiʻi. The southern section, between Hilo and Kailua-Kona is numbered as Route 11. The section between Hilo and Waimea is Route 19. Between Waimea and Kailua-Kona, the road is split in two: the original "mauka" route (now Route 190) and a "makai" Route 19, completed in 1975, which serves as access to the Kona and Kohala Coast resorts. In the Hawaiian language, mauka means "towards the mountain" and makai means "towards the sea". These terms are commonly used in travel directions.

Parts of the southern half of the Hawaiʻi Belt Road were known during the Territorial days as the Kaʻū Belt Road. The names "Hawaiʻi Belt Road" and "Māmalahoa Highway" refer to the road system that encircles the entire island; many sections are also referenced by local names.

Belt Road indicated in red on this map

Māmalahoa Highway was named for the royal decree by King Kamehameha I after an incident he and his party experienced in 1783.

As he prepared to unite the Islands of Hawaiʻi, Kamehameha I would conduct shoreline raids on the neighboring ahupuaʻa (traditional land divisions). It was on one such incursion that the King’s warriors encountered two local fishermen along the Puna coast. The two fled to warn others of the pending attack and Kamehameha and his men took chase. When they crossed a lava field, one of the King’s feet got caught in a crevice.

The fishermen, seizing the opportunity to retaliate, returned and attacked. In the ensuing brawl, one of the King’s steersmen was killed and Kamehameha himself received a blow to the head that was so hard that it splintered the man’s weapon – a solid koa canoe paddle. The two Puna men escaped.

Kamehameha I opted not to retaliate but instead took this as a lesson: The strong must not mistreat the weak, his people must be assured protection from harm’s way in their pursuits and that safe passage must be everyone’s entitlement. A decade later, King Kamehameha I, upon reflecting on his deliverance that day in Puna and on the memory of his fallen warrior, proclaimed Ke Kānāwai Māmalahoe – "The Law of the Splintered Paddle" – at Kahaleʻioleʻole in the Kaipalaoa area of Hilo.

Ke Kānāwai Māmalahoe is considered such an important law to the Hawaiians that at the 1978 Constitutional Convention it was added to the Constitution of Hawaiʻi. In it, the law protects the public and the safety of all who travel throughout the Islands, including fishermen, gatherers, hunters and visitors alike.

Hawaiʻi Constitution (Article IX, Section 10) - Public Safety
The Law of the Splintered Paddle, Ke Kānāwai Māmalahoe, [as] decreed by Kamehameha I, [that] every elderly person, woman and child lie by the roadside in safety, shall be a unique and living symbol of the State's concern for public safety. The State shall have the power to provide for the safety of the people from crimes against persons and property.
(Add ConCon 1978 and election November 7, 1978.)

The Māmalahoa trail was a foot trail built in the nineteenth century, which developed into this highway. Various parts were widened and re-aligned over the years. Much of the Hawaiʻi Belt Road through North Hilo and Hāmākua districts was built on the roadbed and bridges of the Hawaii Consolidated Railway as part of the recovery from a tsunami that ravaged the island's northeast coast in 1946.

Just beyond the Kaʻū District line, the entrance to Hawaiʻi Volcanoes National Park at mile 28 marks another name change, back to Māmalahoa Highway. The two lane road crests (4024 ft/1226M) just before the mile 30 marker and then heads down a long downhill stretch through the Kaʻū desert towards the black sands of Punaluʻu Beach Park, passing macadamia orchards near the town of Pāhala at mile 51 and the Sea Mountain Resort in Nīnole at mile 56.

Next are Nāʻālehu (mile 63), the southernmost community in the USA, and Waiʻōhinu (mile 65) which was a retreat for Mark Twain. A winding uphill climb yields to a meandering country lane were South Point Road, near mile 69, leads to Ka Lae (south point).

Another comfortable stretch of two lane road and a return to highway speeds begins past the mile 71 marker. Māmalahoa Highway crosses Mauna Loa's 1907 Lava Flow — there is a scenic point at mile 75 — before passing through Ocean View between Tiki Lane and Aloha Boulevard. Just past mile 82 is the South Kona District line.

Starting at mile 89, Māmalahoa Highway has sharp curves and a steep drop-off along the coastal side. Many small fishing villages dot the coast, including Miloliʻi, Pāpā Bay, Kona Paradise and macadamia orchards soon give way to another tree crop. This is Kona coffee Country.

After mile 111 come the towns of Kealakekua, Kainaliu and Honalo. At "Coffee Junction" (mile 114), Māmalahoa Highway continues straight and eventually becomes Route 180, Route 11 veers to left and becomes Kuakini Highway. A 5-mile (8.0 km) stretch from Honalo and then along the upper road until it rejoins the main Belt Road at Palani Junction is under consideration to be designated a National Scenic Byway. It was called the Kona Heritage Corridor by the state.[1] A somewhat steep descent off Puʻuloa drops into the town of Kailua-Kona.

Just past Lako Street is where Kuakini Highway branches to the left and Highway 11 becomes Queen Kaʻahumanu Highway. In the vicinity of mile 121, Hualālai Road (Route 182, incorrectly signed as "180") crosses at an exaggerated angle (a rare concurrent route). Highway 11 finally reaches the crossroads of the “Queen K” and Palani Road, pinpointing the termini of all three Hawaiʻi Belt Road route numbers.

Tucked away at the gates to Hilo Wharf on Kūhiō Street is the mile Ø marker for Route 19. One block later, it then turns right onto Kalanianaʻole Avenue, running between the waters of Hilo Bay and the Runway 8/26 of Hilo International Airport, before crossing Kanoelehua Avenue (Route 11) and Banyan Drive where the name changes to Kamehameha Avenue. Flanking the Wailoa River (Hawaii) Bridge is the 1960 Tsunami Memorial Clock with its hands frozen at the moment the killer waves struck early morning on May 23, 1960.

Past the intersection with Waiānuenue Avenue (Route 200, known as the Saddle Road), Route 19 crosses over the Wailuku River. The "Singing" or "Whistling Bridge" a converted railroad plate girder bridge with a metal grate roadway that causes tires to “sing” as vehicles pass over it. Leaving Hilo, the route assumes the name Hawaiʻi Belt Road, leaving Māmalahoa Highway to the older decommissioned portions of the original thoroughfare. Many former sugar plantation towns dot the highway, including Wainaku, Paukaʻa and Pāpaʻikou.

Shortly after the mile 7 marker, part of the old Māmalahoa Highway crosses Hawaiʻi Belt Road. The road to the right leads down the “Onomea Scenic Drive,” a four-mile (6½ km) loop road that crosses several one-lane wooden bridges and past the Hawaiʻi Tropical Botanical Garden overlooking Onomea Bay before returning to Hawaiʻi Belt Road at mile 10 in Pepeʻekeō. 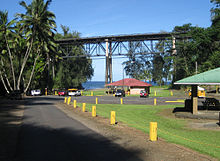 The Hakalau Bridge carries Route 19 from the South Hilo District to North Hilo District. A number of cascades are visible from the road on the “mauka” side of the highway. Umauma Falls lies inside the World Botanical Gardens, but two other falls are viewed from the Umauma Bridge (between mile 16 and mile 17). Between mile 18 and mile 19 is Nānue Stream with another picturesque waterfall.

The highway negotiates three sharp curves: Maulua (mile 22), Laupāhoehoe (mile 26) and Kaʻawaliʻi (mile 28). Maulua Gulch has a small waterfall emptying into the ocean (visible from the Hilo side by looking across the gulch) and another in the back part of the gorge near the base of the radio tower. Also, an abandoned railroad tunnel is sometimes visible from the Hāmākua side). The Laupāhoehoe Railroad Museum is located on the “mauka” side past mile 25. On the other side of Laupāhoehoe Gulch, an access road leads down to Laupāhoehoe Point Beach Park where the victims of the 1946 “April Fool’s Day” tsunami are memorialized. Past passing lanes as Highway 19 goes by the old sugarmill town of ʻOʻōkala.

The Hāmākua District begins on the opposite side of Kaʻula Bridge (mile 30). Highway speeds are now the norm but caution must be observed when crossing the narrow “Curved Bridge” near mile 32. This bridge was replaced in May 2010 by a new bridge with less curvature. This area is rich in history from the days when sugar was king. Hamlets with names like Kalōpā and Pāʻauhau were once homes for sugar plantation workers from places like the Philippines, China and Japan.

Māmane Street (route 240, mile 42) spurs off to the right to become the main street of Honokaʻa before providing access to Waipiʻo Valley. Old Māmalahoa Highway branches uphill to wind through rugged hills of Āhualoa and is a scenic but slower route to Waimea. Meanwhile, Hawaiʻi Belt Road makes its way through fog-shrouded eucalyptus stands.

The Old Māmalahoa Highway rejoins Route 19 near mile 52 where they cross into South Kohala District. Now again called Māmalahoa Highway, Route 19 continues into the town of Waimea (known as Kamuela by the Post Office), the headquarters for Parker Ranch and the heart of paniolo (Hawaiian cowboy) country. 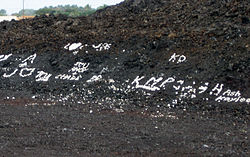 At mile 57, the route turns right onto Lindsey Road (see Route 190). One block down, Route 19 spurs left onto Kawaihae Road, past a row of restaurants and before starting downhill towards the coast. Just beyond mile 59 is a “Y” junction with Kohala Mountain Road (state route 250) in front of Hawaiʻi Preparatory Academy.

The terminus of Route 19 is at the crossroads of Palani Road (Route 190) at mile 100 where Queen Kaʻahumanu Highway continues as Route 11.

The road subsequently runs past Camp Tarawa, the Parker Ranch headquarters and the Waimea-Kohala Airport before traversing the rolling pasturelands of the South Kohala District.

Few intersections are found along the next twenty miles (32 km). Saddle Road (Route 200) comes to its western terminus near mile 6 and Waikōloa Road ends its twelve-mile (19 km) climb from Queen Kaʻahumanu Highway at Māmalahoa Highway’s mile 11 marker. There are some sharp curves as the old road passes asphalt stretches across the windswept rangelands and lava fields covered with fountain grass.

As the road passes through a stand of eucalyptus and ʻohiʻa trees near mile 31, the upland neighborhoods of the North Kona District come into view: Kalaoa, Kona Palasades Estates, Koloko Mauka and Honokōhau. On the other side of mile 35, a traffic light at the top of Hina Lani Street provides access to a Costco store.

State Highways are marked as "××" and County funded roads are with (××). Former or unmarked routes are indicated by an asterisk.