The Wandering Tattler, Tringa incana (formerly Heteroscelus incanus: Pereira & Baker, 2005; Banks et al., 2006), is a medium-sized wading bird. It is similar in appearance to the closely related Gray-tailed Tattler, T. brevipes. The tattlers are unique among the species of Tringa for having unpatterned, greyish wings and backs, and a scaly breast pattern extending more or less onto the belly in breeding plumage, in which both also have a rather prominent supercilium. 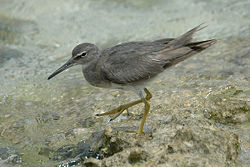 These birds have stocky bodies with gray upperparts, underwings, face and neck and a white belly. They have short dark yellow legs and a dark gray bill. Adults in breeding plumage are heavily barred underneath.

In summer, they are found in Alaska and northwestern Canada. They nest in rocky areas along mountain streams. At other times, they are found on rocky islands in the southwest Pacific and on rocky Pacific coasts from California to South America and as far as Australia.

They feed on aquatic invertebrates such as crustaceans and marine worms. During breeding season, they also eat insects. While wading, they forage actively, making jerky bobbing movements.

The female lays 4 olive-colored eggs in a shallow depression. Both parents incubate and help feed the young, who are soon able to forage for themselves.

The call is a rapid trill of accelerating, descending notes of decreasing volume.