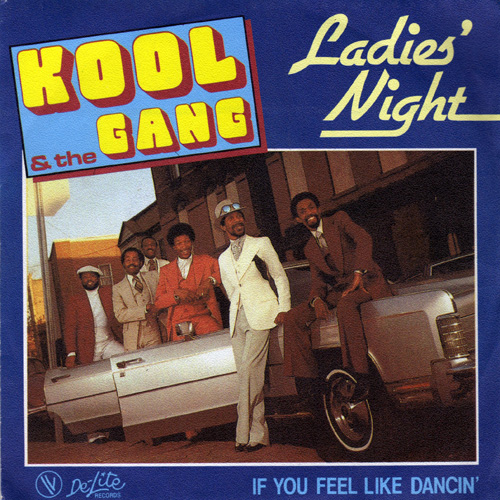 "Ladies' Night" was the hit title track single on the album "Ladies' Night" released in 1979 by . The song as a single was a success, and became a radio staple. It was also a chart success, peaking at #8 on the in 1980.

A short rendition of the song appeared in the 1997 film "" in which performed in an attempt to convince female lead () to hire him for her wedding.

It was featured on the video game .

The video begins with many people anxiously crowded around the entrance of a club, trying to get in. Suddenly a pink plasma waves sweeps through the middle of the crowd, from the door, pushing them off to either side. The kittens head into the Kitten Club, and the crowd follows them in, until only the bouncer is left standing outside.

In the well-lit club, the kittens groove about and sing, a great deal of which is on a pure white dance floor. They primarily dance in a row, with two rows of men behind them, though occasionally they are straddling the fellows, or performing other dance moves with them.

Exactly 37 seconds into the video, drag queens are spotted, they are first featured 50 seconds in. They appear repeatedly throughout the video, including in the women's washroom, near the video's conclusion. The or homosexual bartender, baring resemblance to , appears throughout the video. At 1:54, Jen starts to flirt with him, as if going in for a kiss; in actuality, she's stealing his drink from behind him. While a man hits on Lil, he is in turn hit on by another man, at 1:10. There is also a man dancing in a cage with a round top; there is no suggestion if this is to entertain the straight or homosexuals in attendance, or both.

At 1:27, the Kittens flip their hands in the air, creating pink plasma as appeared earlier in the video. This transports them to the opposite side of the club, where they appear on , in different outfits. They use their magic again, at 2:16, instantly stripping three men down to pink lycra underwear. The men, in their skivvies, visit the girls at their booth. Tash is so amused at the provided crotch view that she brings out American money which she waves around; money is never actually transferred.

At the very start of the video, when Jen blows a kiss, lip marks appear on the screen as a graphic.

The video itself is 3:09 minutes long, however it is preceded with the following white text on a black background: cquote|no men were hurt during
the making of this
video...
(that happened later!) There is a one second fade to black at 3:15.

The video director was .

"Ladies Night" was also remade with and in 2004. This was also a collaboration with and reached 58 in the Swedish chart [ [http://swedishcharts.com/showitem.asp?interpret=Kool+%26+The+Gang+feat%2E+Spanner+Banner+%26+Sean+Paul&titel=Ladies+Night&cat=s SwedishCharts.com] "Ladies Night" (Spanner Banner) page Accessed: October 29, 2006] The song is also coved by the San Francisco indie rock band "Two Seconds" at their live shows.