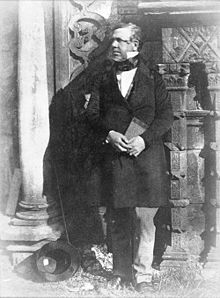 David Roberts RA (24 October 1796 – 25 November 1864) was a Scottish painter. He is especially known for a prolific series of detailed lithograph prints of Egypt and the Near East that he produced during the 1840s from sketches he made during long tours of the region (1838–1840). These, and his large oil paintings of similar subjects, made him a prominent Orientalist painter. He was elected as a Royal Academician in 1841.

David Roberts was born at Stockbridge, Edinburgh. At the age of 10, he was apprenticed by his father, a shoemaker, for seven years to a house painter and decorator named Gavin Beugo.[1] During this time he studied art in the evenings. His first paid job came in 1815, when he moved to Perth for a year to work as a decorator.

In 1816, the Pantheon Theatre in Edinburgh took him on as a stage designer's assistant; this was the beginning of his career as a painter and designer of stage scenery. In 1819, he became the scene painter at the Theatre Royal in Glasgow. There Roberts met the Scottish actress Margaret McLachlan, said to be the illegitimate daughter of a Highland gypsy girl and a clan chief.[1] They married in 1820, "for pure love". Although the marriage did not last long, it produced Roberts' only daughter, Christine, who was born 1821.

Although he was making a living from scene painting, it was around this time that Roberts began to produce oil paintings seriously. In 1820, he became friends with the artist William Clarkson Stanfield, then painting at the Pantheon in Edinburgh. In 1821, the Fine Arts Institution of Edinburgh accepted three of Roberts's paintings — views of Melrose and Dryburgh abbeys) — two of which sold. At Stanfield's suggestion, Roberts also sent three pictures to the 1822 Exhibition of Works by Living Artists, held in Edinburgh. 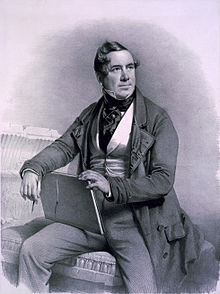 A portrait of David Roberts

In 1822 the Coburg Theatre, now the Old Vic in London, offered Roberts a job as a scenic designer and stage painter. He sailed from Leith with his wife and the six-month-old Christine and settled in London.[1] After working for a while at the Coburg Theatre, Roberts moved to the Theatre Royal, Drury Lane to create dioramas and panoramas with Stanfield.[2]

A miniature by Roberts from this time shows Margaret as a delicate woman with blonde ringlets, holding the smiling three-year-old Christine. But Roberts' family life was not as idyllic as this picture suggests: Margaret had become an alcoholic, and eventually, in 1831, Roberts sent her back to Scotland to be cared for by friends. Roberts may have burned some letters from this period in shame at his wife's drinking problem, but he was unusually frank in a letter to a friend, David Ramsay Hay. Roberts and Hay had been an apprentices together, and Hay had been seeing a mistress since his own wife had started drinking.

"If you do not know our cases are almost parallel. Yours is not as bad as mine, having some consolation. The state of my nerves is such I can scarcely write. But thank God she leaves tomorrow—I hope for ever."[1]

In 1824, he exhibited another view of Dryburgh Abbey at the British Institution and sent two works to the first exhibition of the newly formed Society of British Artists. In the autumn of 1824 he visited Normandy. His paintings based on this trip began to lay the foundation of his reputation; one of them, a view of Rouen Cathedral, sold for 80 guineas. 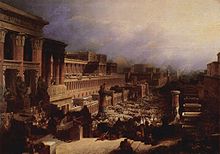 Departure of the Israelites, 1829

While he built his reputation as a fine artist, Roberts's stage work had also been commercially successful. Commissions from Covent Garden included the sets for the London premiere of Mozart’s Die Entführung aus dem Serail (The Abduction from the Seraglio) in 1827, scenery for a pantomime depicting the naval victory of Navarino, and two panoramas that he executed jointly with Stanfield.

During the second part of the 1820s, and in addition to English and Scottish scenes, Roberts painted views of prominent buildings in France and the Low Countries including Amiens, Caen, Dieppe, Rouen, Antwerp, Brussels and Ghent,[3] sometimes making several paintings of the same scene with only minor variations.

By 1829 he was working full-time as a fine artist. That year, he exhibited the Departure of the Israelites from Egypt, in which his style first became apparent. In 1831, the Society of British Artists elected him as their president, The next year he traveled in Spain and Tangiers. He returned at the end of 1833 with a supply of sketches that he elaborated into attractive and popular paintings. The British Institution exhibited his Interior of Seville Cathedral in 1834, and he sold it for £300. He executed a fine series of Spanish illustrations for the Landscape Annual of 1836. Then in 1837 a selection of his Picturesque Sketches in Spain was reproduced by lithography.

In London he made the acquaintance of artists such as Edward Thomas Daniell and John Linnell, who frequented Daniel's house.

Travel to Egypt and Holy Land 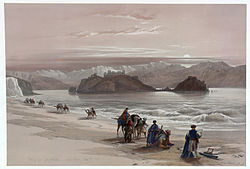 "Isle of Graia Gulf of Akabah Arabia Petraea", 1839 lithograph of a trade caravan by Louis Haghe from an original by David Roberts.

It was J.M.W. Turner who managed to persuade him to abandon scene painting and devote himself to becoming a true artist. Roberts set sail for Egypt on 31 August 1838, a few years after Owen Jones. His intent was to produce drawings that he could later use as the basis for the paintings and lithographs to sell to the public. Egypt was much in vogue at this time, and travelers, collectors and lovers of antiquities were keen to buy works inspired by the East or depicting the great monuments of ancient Egypt.

Roberts made a long tour in Egypt, Nubia, the Sinai, the Holy Land, Jordan and Lebanon. Throughout, he produced a vast collection of drawings and watercolour sketches.

Muhammad Ali Pasha received Roberts in Alexandria on 16 May 1839, shortly before his return to Britain. He later reproduced this scene (apparently from memory) in Volume 3 of Egypt & Nubia. 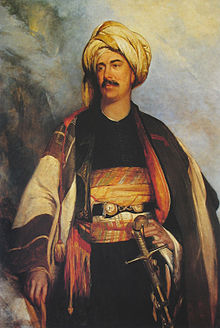 Upon Roberts's return to Edinburgh in 1840, his fellow-artist, Robert Scott Lauder, painted his portrait. (In 1980, the National Gallery of Scotland purchased the portrait.) Scottish society fêted him. For instance, he was the guest of honour at a dinner on 19 October 1842, at which Lord Cockburn presided.[4]

On his return to Britain, Roberts worked with lithographer Louis Haghe from 1842 to 1849 to produce the lavishly illustrated plates of the Sketches in the Holy Land and Syria, 1842-1849 and Egypt & Nubia series. He funded the work through advance subscriptions which he solicited directly. The scenery and monuments of Egypt and Holy Land were fashionable but had hitherto been hardly touched by British artists, and so Roberts quickly accumulated 400 subscription commitments, with Queen Victoria being subscriber #1. Her complete set is still in the Royal Collection.

In 1851, and again in 1853, Roberts visited Italy, painting the Ducal Palace, Venice, bought by Lord Londesborough, the Interior of the Basilica of St Peters, Rome, Christmas Day, 1853, and Rome from the Convent of St Onofrio, presented to the Royal Scottish Academy.

His last volume of illustrations, Italy, Classical, Historical and Picturesque, was published in 1859. He also executed, by command of Queen Victoria, a picture of the opening of the Great Exhibition of 1851. In. 1839 he was elected an associate and in 1841 a full member of the Royal Academy; and in 1858 he was presented with the freedom of the city of Edinburgh. The last years of his life were occupied with a series of views of London from the Thames. He had executed six of these, and was at work upon a picture of St Paul's Cathedral, when he died suddenly of apoplexy.

He was buried at West Norwood Cemetery.[5] ==Selected works==