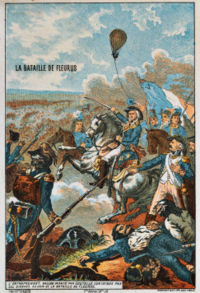 L'Entreprenant at the Battle of Fleurus (1794).

Balloons were the first mechanisms used in air warfare. Their role was strictly recognized for reconnaissance purposes. They provided humans with the first available method of elevating themselves well over the battlefield to obtain the proverbial "birds-eye view." They were an early instrument of definitive intelligence collection, and were also particularly useful in the preparation of accurate battlefield maps, before which time this rudimentary craft had led to many a battle field failure. 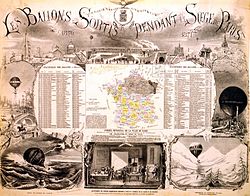 The first successfully flown balloons were made in France by the Montgolfier brothers, around 1783. They were rigid-style spheres made of cotton or silk stretched over a simple light wood frame resembling a large egg. These rigid balloons were held up over a fire so that the smoke billowed well into the cavity of the sphere. It was thought that the smoke made the balloons rise, but actually it was the hot air of the smoke that caused the elevating. The first decisive use of a balloon for aerial observation was performed by the French Aerostatic Corps using the aérostat l’Entreprenant ("The enterprising one") at the Battle of Fleurus in 1794. The following year, during the Siege of Mainz an observation ballon was employed again. However, the French military use of the balloon did not continue un-interrupted as in 1799, Napoleon disbanded the French balloon corps.[1]

American ballooning began in the early half of the 19th century using light coke gas for inflation. This gas, if inflated into a relatively well-sealed silk envelope, could sustain flight nearly indefinitely. Balloons were mainly used as amusement rides, so initially the military had no use for them at all.

Balloons in the American Civil War

With the outbreak of the American Civil War, President Abraham Lincoln did consider the possibility of an air-war mechanism. This had some of the top balloonists in the country vying for position as chief aeronaut of a would-be aeronautics division. The scientific community as well showed great support in influencing Washington to consider the use of balloons. Eventually it was Prof. Thaddeus S. C. Lowe who would be awarded the title Chief Aeronaut of the Union Army Balloon Corps. 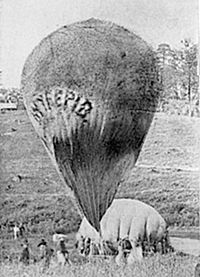 Intrepid being cross-inflated from Constitution in a mad-dash attempt to get the larger balloon in the air to overlook the imminent Battle of Fair Oaks. 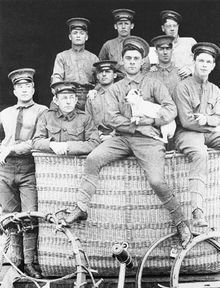 The first assignment for military balloons was given to the Union Army's Topographical Engineers for mapmaking. Up until that point, maps were made from ground level perspectives and their innate inaccuracy led to many a battlefield failure. The aerial perspective ostensibly improved mapmaking, especially when combined with the use of photography.

General Irvin McDowell, commander of the Army of the Potomac, called on the balloon to perform aerial observations of enemy encampments and movements in the First Battle of Bull Run. With Lowe’s techniques proven to the top commanders, he was eventually tasked to build seven balloons and a series of hydrogen gas generators to inflate them in the battlefield. Even though Thaddeus Lowe was Chief Aeronaut, his bitter rival John La Mountain is credited with having made the first aerial observations of intelligence value while stationed independently at Fortress Monroe.

The balloon, under flight direction of Prof. Lowe, was also used to direct artillery fire from an unseen location onto a Confederate encampment. The balloon, Eagle, was ascended with tether and telegraph from Fort Corcoran north of Falls Church, Virginia. An artillery battery was located at the easterly Camp Advance. With a series of predetermined flag signals, Lowe directed fire onto the Rebel encampment until the shots were landing on target. This first-used concept was the predecessor to the Forward Artillery Observer (FAO) and revolutionized the use of artillery even to modern day.

Prof. Lowe was once approached by the young Graf Ferdinand von Zeppelin in 1863, who was at the time acting as a then-civilian observer for the Union Army, about possibly serving as an aerial observer with Lowe, but this was forbidden by Union military authorities during the Civil War years, due to von Zeppelin's then-civilian status. The future rigid airship pioneer was instead directed to the camp of John Steiner, a German aeronaut already in the United States, to get his first flight experience in a balloon, which von Zeppelin was able to do at a slightly later time while he still was in the USA.

Balloons and generators were loaded onto the George Washington Parke Custis, a converted coal barge. The balloons were towed down the Potomac River and were able to ascend and make observations of the battle front as it moved toward Richmond. This is the first ever recorded observation from an aerial station by water, essentially the first-ever aircraft carrier (balloon tender).

Lowe went on to make observations at Fair Oaks, Sharpsburg, Vicksburg and Fredericksburg before political ambush both from within the military and in Congress forced him to resign in April 1863 at which point he returned to the private sector. The Balloon Corps all but ceased to exist by August 1863.

The Confederates tried their hand at ballooning as well, more only to counter the balloons of the Federals. One type of balloon was a Montgolfier style of a rigid, cotton, “hot smoke” balloon. The attempts worked, but their handling techniques were poor at best and the balloon was easily lost and captured by the North.

Another style is referred to as the “silk dress balloon,” aerostat envelopes made of multicolored dress making silk (not actually silk dresses) which, when gas was available, were used effectively over Richmond. Again, these were easily lost, destroyed or captured, and the lack of supply made it impossible to replace them. They were relieved when the Union Army had discontinued the use of balloons.

In 1867 during the Paraguayan War, balloons were used in the fighting between Brazil and Paraguay.[2]

Between 1862–71 efforts by two Royal Engineers officers, were made to catch the attention of senior British officers to the potential use of balloons. In July 1863 experimental balloon ascents for reconnaissance purposes were conducted by the Royal Engineers on behalf of the British Army, but although the experiments were successful it was considered not worth pursuing further because it was too expensive. However, by 1878 a Balloon Equipment Store was established at Woolwich by the Royal Engineers. By this time the limitations imposed by the need to produce hydrogen in the field by some portable apparatus and finding a suitable material for the envelope of a war balloon had been resolved.

In 1888 a School of Ballooning was established at Chatham, Medway, Kent. It moved to Stanhope Lines, Aldershot in 1890 when a balloon section and depot were formed as permanent units of the Royal Engineers establishment.

Balloons were first deployed by the British Army during the expeditions to Bechuanaland and Suakin in 1885. They were also deployed during the Second Boer War (1899–1902), where they were used in artillery observation with the Kimberley column and during the Siege of Ladysmith.

On October 5, 1907, Colonel John Capper (late Royal Engineers) and team flew the military airship Nulli Secundus from Farnborough around St. Paul's Cathedral in London and back with a view to raising public interest.[citation needed]

The use of manned air-war mechanisms would not be seen for nearly 30 years after the Civil War when the airship (a dirigible, blimp, or Zeppelin) would come into existence with their motorized propulsion and mechanical means of steering. Up to this point, the idea of dropping ordnance on the enemy was not seriously considered, although there were mechanical drawings made up depicting bomb dropping devices that could be floated aloft by balloons. These depictions were paper theory at best designed by mechanical wizzes with no idea about aviation, in particular, balloons, and all that it takes to successfully launch gas-filled aerostats.

There weren't really any practical types of grenades or bombs to use during the Civil War. Weight was a great factor in determining the size of balloons to be used and the amount of gas they needed to ascend. Carrying heavy ordnances and ungainly mechanisms in balloons would have been out of the question. (And if Prof. Lowe thought that he would have to drop bombs on enemy positions, he would have never offered his services.) With the newer, larger and more manageable aerostats, and smaller munitions, the use of bombs would make aerial warfare much more appealing in later days.

Military observation balloons were used over the trenches of the Western Front. Germany used Zeppelins for aerial bombing and reconnaissance. One famous raid conducted by Zeppelin on London.

Zeppelin forces were established by Great Britain and the United States.