The Singapore Zoo (Chinese: 新加坡动物园; pinyin: Xīnjiāpō Dòngwùyuán; Malay: 'Taman Haiwan Singapura'; Tamil: சிங்கப்பூர் விலங்குக் காட்சிச்சாலை), formerly known as the Singapore Zoological Gardens and commonly known locally as the Mandai Zoo, occupies 28 hectares (0.28 km²) of land on the margins of Upper Seletar Reservoir within Singapore's heavily forested central catchment area. The zoo was built at a cost of S$9m granted by the government of Singapore and opened on 27 June 1973. It is operated by Wildlife Reserves Singapore, who also manage the neighbouring Night Safari and the Jurong BirdPark. There are about 315 species of animal in the zoo, of which some 16% are considered threatened species. The zoo attracts about 1.6 million visitors each year.[1]

From the beginning, Singapore Zoo followed the modern trend of displaying animals in naturalistic, 'open' exhibits with hidden barriers, moats, and glass between the animals and visitors. It houses the largest captive colony of orangutans in the world.[citation needed] In 1977, primatologist Dr Francine Neago lived inside a cage with eighteen orangutans for six months to study their behavior and communication.

A pair of white tigers

The conception of the Singapore Zoo dates from 1969. At the time, the Public Utilities Board (PUB) decided to use some of its land holdings around reservoirs for parks and open recreational facilities. The then Executive Chairman of PUB, Dr Ong Swee Law, set aside 88 hectares of land for the construction of a zoological garden.

In 1970, consultants and staff were hired, and in 1971, the construction of the basic 50 enclosures started. Animals were collected from dealers and donated by sponsors. The Director of the Colombo Zoo in Sri Lanka, Lyn de Alwis, was hired as a special consultant to work out problems inherent in tropical zoos.

On 27 June 1973, the Singapore Zoo opened its gates for the first time with a collection of 270 animals from over 72 species, and a staff of 130. By 1990, 1,600 animals from more than 160 species lived in social groups, housed in 65 landscaped exhibits with boundaries conceived to look as natural as possible. 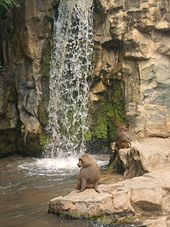 Hamadryas baboons by a waterfall

Animals are kept in spacious, landscaped enclosures separated from the visitors by either dry or wet moats. The moats are concealed with vegetation or dropped below the line of vision. Dangerous animals that can climb well are housed in landscaped glass-fronted enclosures.

The zoo has not expanded beyond the original 28 hectares. However, 40 hectares of secondary forest were later developed into the Night Safari. The remaining undeveloped land has been kept as wooded land. This and the waters of Upper Seletar Reservoir contribute to the Zoo, giving it a sense of natural, unrestricted space.

Animals at the zoo include the following:[2]

The Wildlife Healthcare & Research Centre was opened in March 2006 as part of the zoo's efforts in wildlife conservation. The centre further underscores Singapore Zoo and Night Safari’s commitment to conservation research, providing the infrastructure for the parks and overseas zoological partners to better execute their research programmes. The Singapore Zoo is the first zoo in the world to breed a polar bear in the tropics. Inuka was conceived on 26 December 1990.

The zoo also embarked on various rescue and conservation efforts to protect wildlife. Steve Irwin, the animal activist and conservationalist known as "The Crocodile Hunter", admired the Singapore Zoo greatly, adopting it as the 'sister zoo' to the Australia Zoo. He was at the Singapore Zoo in 2006 to officiate the opening of the Australian outback exhibit.[citation needed]

"Breakfast with an Orangutan" lets visitors to meet and interact closely with the orangutans in the zoo, which has included Ah Meng (died on February 8, 2008) who was an icon of the Singapore tourism industry. Animal shows, as well as token feedings coupled with live commentaries by keepers, are also the daily staple in the Singapore zoo.

The "Rainforest Fights Back" show is housed in the Shaw Amphitheatre, the main amphitheatre within the zoo. Actors and performers act alongside the animals: in-show, a villainous poacher attempts to mow down a section of tropical rainforest for land development, and is foiled by the native people and the animals of the rainforest (orangutans, lemurs, pea-fowls, otters, and cockatiels).

The "Elephants at Work and Play" show demonstrates how elephants are used as beasts of burden in south-east Asian countries. The animal caretakers are referred to as mahouts, and the show simulates how a mahout would instruct an elephant to transport logs or kneel down so that they can be mounted.

The "Splash Safari" show showcases the zoo's aquatic mammals and birds. Seals and sealions perform tricks and pelicans demonstrate how they catch fish in their beaks, while manatees swim in the pond below.

The "Animal Friends" show, housed in the Kidzworld amphitheater in the zoo's childrens' section, features mostly domesticated animals such as dogs and parrots performing tricks. 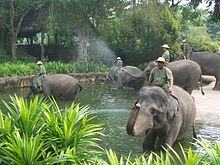 Elephant show and the trainers

Friends of the Zoo

The zoo also has a "friends of the zoo" programme, where people can sign up for a yearly pass which grants them special privileges such as:

On 13 November 2008, two of three white Bengal white tigers mauled a suicidal zoo cleaner to death after the man jumped into a moat surrounding their enclosure and taunted the animals so they would kill him. [3]

The zoo is scheduled to open River Safari in 2012. This 12-hectare (30-acre) river-themed exhibit is scheduled to be home to some 5,000 animals representing 500 species, including a large collection of freshwater aquatic animals. Among the residents of this exhibit will be a pair of giant pandas in a new climate controlled exhibit. The zoo has planted an 8,000-square-metre (86,000 sq ft) bamboo forest for the panda's food. Other residents will include red pandas, raccoon dogs, Mekong giant catfish, Manatees, giant river otters, and polar bears in the air-conditioned ‘Frozen Tundra’ exhibit.[7][8]

Since there are no MRT station in the vicinity, visitors to the zoo mainly rely on car, taxi, tour buses and local bus services.

There are 3 bus services (services 138, 926, 927) which stop outside the bus stop at Mandai Lake Road. These 3 bus services, if taken from the zoo, would ferry passengers to towns. These towns are Ang Mo Kio, Woodlands, and Choa Chu Kang. Once the bus services reach the last stop which is the town's respective bus interchange, they can transfer onto an MRT station which links the town to the rest of the country, making it easy to also travel to the city. An additional service service 171 connecting the Zoo to popular tourist spots such as Orchard Road and hotels such as the acclaimed Raffles Hotel , stops outside Mandai Road. People who want to take this service to the zoo, must alight at Mandai Road and walk down to Mandai Lake Road or transfer to services 138 or 927. Bus fares are about $1.20 SGD per trip (about USD$1)