The National Grange of the Order of Patrons of Husbandry

The National Grange of the Order of Patrons of Husbandry 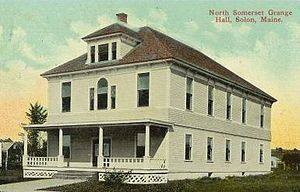 The National Grange of the Order of Patrons of Husbandry, also simply styled the Grange, is a fraternal organization for American farmers that encourages farm families to band together for their common economic and political well-being. Founded in 1867 after the Civil War, it is the oldest surviving agricultural organization in America, though now much diminished from the over one million members it had in its peak in the 1890s through the 1950s. In addition to serving as a center for many farming communities, the Grange was an effective advocacy group for farmers and their agendas, including fighting railroad monopolies and advocating rural mail deliveries. Indeed, the word "grange" itself comes from a Latin word for grain, and is related to a "granary" or, generically, a farm.

The motto of the Grange is: "In essentials, unity; in non-essentials, liberty; in all things, charity."

In 2005, the Grange had a membership of 300,000, with organizations in 3,600 communities in 37 states. Its headquarters are in a building in Washington, D.C., built by the organization in 1960. Many rural communities in the United States still have a "Grange Hall". 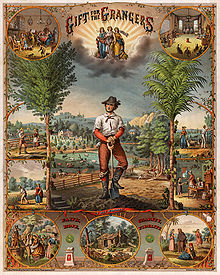 Promotional poster offering a "gift for the grangers", ca. 1873.

President Andrew Johnson sent Oliver Hudson Kelley to the South to collect agricultural data. As a Northerner, Kelley was met with suspicion. However, he was a Freemason, an affiliation that overcame sectional differences. Kelley saw the need for an organization that would bring farmers together and advance their interests. After consultations with the other founders, the Grange was born in 1867. The first Grange was Potomac Grange #1 in Washington, D.C., still extant as of 2011[update].

Membership in the Grange increased dramatically from 1873 (200,000) to 1875 (858,050) as many of the state and local granges adopted non-partisan political resolutions, especially regarding the regulation of railroad transportation costs. The organization was unusual at this time in that it allowed women and teens as equal members. In fact, four of the sixteen elected positions can only be held by women. 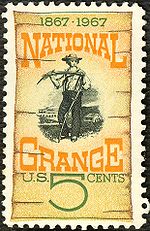 Rapid growth infused the national organization with money from dues, and many local granges established consumer cooperatives, initially supplied by the wholesaler Aaron Montgomery Ward. Poor fiscal management, combined with organizational difficulties resulting from rapid growth, led to a massive decline in membership. By the turn of the 20th century, the Grange rebounded and membership stabilized.

In the middle of the 1870s the Granger movement succeeded in regulating the railroads and grain warehouses. The birth of the Cooperative Extension Service, Rural Free Delivery, and the Farm Credit System were largely due to Grange lobbying. The peak of their political power was marked by their success in Munn v. Illinois, which held that the grain warehouses were a "private utility in the public interest", and therefore could be regulated by public law (see references below, "The Granger Movement"). Other significant Grange causes included temperance, the direct election of Senators and women's suffrage (Susan B. Anthony's last public appearance was at the National Grange Convention in 1903 [1]). During the Progressive Era of the 1890s to the 1920s political parties took up Grange causes. Consequently, local Granges focused more on community service, although the State and National Granges remain a political force.

In the 20th and 21st centuries, the position of the Grange as a respected organization in the United States was indicated by a membership that included Presidents Franklin D. Roosevelt and Harry S. Truman, as well as artist Norman Rockwell and Nirvana bassist Krist Novoselic.[1] The monument to the founding of the Grange is the only private monument on the National Mall in Washington, D.C.[2]

Grange membership has declined considerably as the percentage of American farmers has fallen from a third of the population in the early 20th century to less than two percent today. In the last 15 years, the number of Grange members has dropped by 40%.[3] Washington has the largest membership of any state, at approximately 40,000.[citation needed]

Despite this drop in membership and national awareness, the Grange continues to press for the causes of farmers, including issues of free trade and farm policy. In its 2006 Journal of Proceedings, the organization's report of its annual convention, the organization lays out its mission and how it works towards achieving it through fellowship, service, and legislation:

"The Grange provides opportunities for individuals and families to develop to their highest potential in order to build stronger communities and states, as well as a stronger nation."

The Grange is nonpartisan, and only supports policies, never political parties or candidates. Although the Grange was originally founded to serve the interests of farmers, because of the shrinking farm population the Grange has begun to broaden its range to include a wide variety of issues, and anyone is welcome to join the Grange.

The Junior grange is open to children 5-14. Regular Grange membership is open to anyone age 14 or older. The Grange Youth is a group created within the Grange and consists of members 14-35. 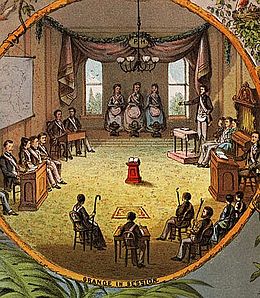 When the Grange first began in 1867, it borrowed some of its rituals and symbols from Freemasonry, including secret meetings, oaths and special passwords. Small, ceremonial farm tools are often displayed at Grange meetings. Elected officers are in charge of opening and closing each meeting. There are seven degrees of Grange membership; the ceremony of each degree relates to the seasons and various symbols and principles.

During the last few decades, the Grange has moved towards public meetings and no longer meets in secret. Though the secret meetings do not occur, the Grange still acknowledges its rich history and practices some traditions. 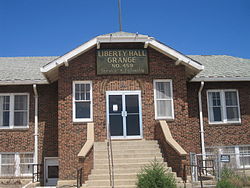