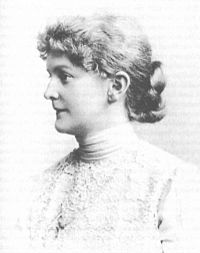 Marie Steiner-von Sivers (born Marie von Sivers - or Sievers - 14 March 1867 – 27 December 1948) was the second wife of Rudolf Steiner and one of his closest colleagues.[1][2] She made a great contribution to the development of anthroposophy, particularly in her work on the renewal of the performing arts (eurythmy, speech and drama),[1] and the editing and publishing of Rudolf Steiner's literary estate.[2]

Marie von Sivers was born of an aristocratic family in Włocławek, Poland, then part of Russia. She was well-educated and was fluent in Russian, German, English, French and Italian. She studied theater and recitation with several teachers in Europe.[2]

Marie von Sivers "appeared one day" at one of Rudolf Steiner's early lectures in 1900. In the autumn of 1901, she posed the question to Steiner, "Would it be possible to create a spiritual movement based on European tradition and the impetus of Christ?" Rudolf Steiner later reported:[2]

With this, I was given the opportunity to act in a way that I had only previously imagined. The question had been put to me, and now, according to spiritual laws, I could begin to answer it.

Marie von Sivers collaborated with Steiner for the rest of Steiner's life and carried his work beyond his death in 1925 until her own death in 1948. She accompanied him and helped him as secretary, translator, editor, and organizer of his lecture tours and other public activities. She assisted Steiner's work with her own resources and in 1908 founded the Philosophical-Theosophical Press (later Philosophical-Anthroposophical) to publish Steiner's work.[2]

On December 24, 1914, Marie von Sivers married Rudolf Steiner. Anna Eunicke Steiner, Steiner's first wife, had died in 1911.[1] From 1914, Steiner drew up a succession of wills naming Marie Steiner-von Sivers as heir to his entire work and property and his successor in the leadership of the anthroposophical movement.[2]

Starting in 1912, the art of eurythmy was developed by Rudolf Steiner. Under Marie Steiner-von Sivers' guidance, it developed in three directions, as a stage art, as an integral part of Waldorf pedagogy, and as a therapeutic method.[1] Under her tutelage, two schools of eurythmy were founded, in Berlin and in Dornach, Switzerland.[2]

Marie von Sivers was trained in recitation and elocution and made a study of purely artistic speaking. She gave introductory poetry recitals at Steiner's lectures and assisted him in the development of the four Mystery Dramas (1910-1913).[2] With her help, Steiner conducted several speech and drama courses with the aim of raising these forms to the level of true art.[1]