The Great Migration was the movement of 6 million blacks out of the Southern United States to the Northeast, Midwest, and West from 1910 to 1930. Some historians differentiate between a First Great Migration (1910–30), numbering about 1.6 million migrants, and a Second Great Migration (1940 to 1970), in which 5 million or more people moved and to a wider variety of destinations. From 1965–70, 14 states of the South, especially Alabama, Louisiana, and Mississippi, contributed to a large net migration of blacks to the other three cultural (and census-designated) regions of the United States.[1] By the end of the Second Great Migration, African Americans had become an urbanized population. More than 80 percent lived in cities. 53 percent remained in the South, while 40 percent lived in the North and 7 percent in the West.[2]

A reverse migration has gathered strength since 1965, dubbed the New Great Migration, the term for demographic changes from 1965 to the present which are a reversal of the previous 35-year trend of black |migration within the United States. Since 1965, deindustrialization of cities in the Northeastern and Midwestern United States, growth of jobs in the "New South", family and kinship ties, and improving racial relations have all acted to attract African Americans to the Southern United States in substantial numbers. As early as 1975-1980, seven southern states were net black migration gainers. African-American populations continue to drop throughout much of the Northeast, particularly with black emigration out of the state of New York[3] as well as out of Northern New Jersey[4], as they rise in the Southern United States.

When the Emancipation Proclamation was signed in 1863, less than eight percent of the African American population lived in the Northeastern or Midwestern United States. In 1900, about 90 percent of blacks still lived in Southern states.

Between 1910 and 1930, the African American population grew by about 40% in Northern states, mostly in the major cities. Cities including Chicago, Detroit, New York City, and Cleveland had some of the biggest increases in the early part of the 20th century. Because changes were concentrated in cities, urban tensions rose as African Americans and new or recent European immigrants, both groups chiefly from rural societies, competed for jobs and housing with the white ethnic working class. Tensions were often most severe between ethnic Irish, defending their recently gained positions and territory, and recent immigrants and blacks.

African Americans moved as individuals or small family groups. There was no government assistance, but often northern industries, such as the railroads, meatpacking and stockyards, recruited people. The primary factor wrap for migration was the racial climate and widespread violence of lynching in the South. In the North, they could find better schools and adult men could vote (joined by women after 1920). Burgeoning industries meant there were job opportunities. 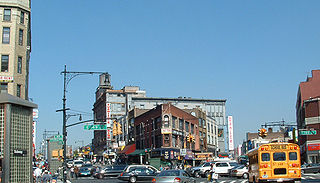 The Hub is the retail heart of the South Bronx, New York City.[5]

The Great Migration created the first large urban black communities in the North. It is conservatively estimated that 400,000 women left the South in 1916 through 1918 to take advantage of a labor shortage in the wake of the First World War.[6]

In her Pulitzer Prize–winning book, The Warmth of Other Suns, journalist Isabel Wilkerson described the migration as "six million black Southerners [moving] out of the terror of Jim Crow to an uncertain existence in the North and Midwest."

Other northern and midwestern industrial cities, such as St. Louis, Baltimore, Philadelphia, Pittsburgh, Omaha and New York, also saw dramatic increases in their African-American populations. By the 1920s, New York's Harlem became a center of black cultural life, influenced by new immigrants from the Caribbean area.

Other cities that received numerous black migrants were Buffalo, Rochester, New York, Boston, Minneapolis, Milwaukee, Kansas City, St. Louis, Columbus, Cincinnati, Cleveland, and Indianapolis, and smaller industrial cities such as Gary, Dayton, Toledo, Youngstown, Peoria, Muskegon, Newark, Flint, and Albany. People tended to take the cheapest rail ticket possible and go to areas where they had relatives and friends. For example, many people from Mississippi moved directly north by train to Chicago, from Alabama to Cleveland and Detroit, and in the second migration, from Texas, Louisiana and Mississippi to California.

While the Great Migration helped educated African Americans obtain jobs, eventually enabling a measure of class mobility, the migrants encountered significant forms of discrimination. Because so many people migrated in a short period of time, the African-American migrants were often resented by the European-American working class; fearing their ability to negotiate rates of pay or secure employment, they felt threatened by the influx of new labor competition. Sometimes those who were most fearful or resentful were the last immigrants of the 19th and new immigrants of the 20th century. In many cities, working classes tried to defend what they saw as "their" territories.[citation needed]

African Americans made substantial gains in industrial employment, particularly in the steel, automobile, shipbuilding, and meatpacking industries. Between 1910 and 1920, the number of blacks employed in industry nearly doubled from 500,000 to 901,000.[6] After the Great Depression, more advances took place after workers in the steel and meatpacking industries were organized in labor unions in the 1930s and 1940s, under the interracial Congress of Industrial Organizations (CIO). The unions ended the segregation of many jobs, and African Americans began to advance into more skilled jobs and supervisory positions.

Populations increased so rapidly among both African-American migrants and new European immigrants that there were housing shortages in many major cities, and the newer groups competed for the oldest, most rundown housing. Ethnic groups created territories which they defended against change. Discrimination often restricted African Americans to crowded neighborhoods. The more established populations of cities tended to move to newer housing as it was developing in the outskirts. Mortgage discrimination and redlining in inner city areas limited the newer African-American migrants' ability to determine their own housing, or obtain a fair price. In the long term, the National Housing Act of 1934 contributed to limiting the availability of loans to urban areas, particularly those areas inhabited by African Americans.[10]

Migrants often encountered residential discrimination, in which white home owners and realtors prevented migrants from purchasing homes or renting apartments in white neighborhoods. In addition, when blacks moved into white neighborhoods, whites would often react violently toward their new neighbors, including mass riots in front of their new neighbors' homes, bombings, and even murder. These tendencies contributed to maintaining the "racial divide" in the North, perhaps accentuating it. By the late 1950s and 1960s, African Americans were hyper-urban, more densely concentrated in inner cities than other groups.

Since African-American migrants retained many Southern cultural and linguistic traits, such cultural differences created a sense of "otherness" in terms of their reception by others who were living in the cities before them.[11] Stereotypes ascribed to black people during this period and ensuing generations often derived from African American migrants' rural cultural traditions, which were maintained in stark contrast to the urban environments in which the people resided.[11]