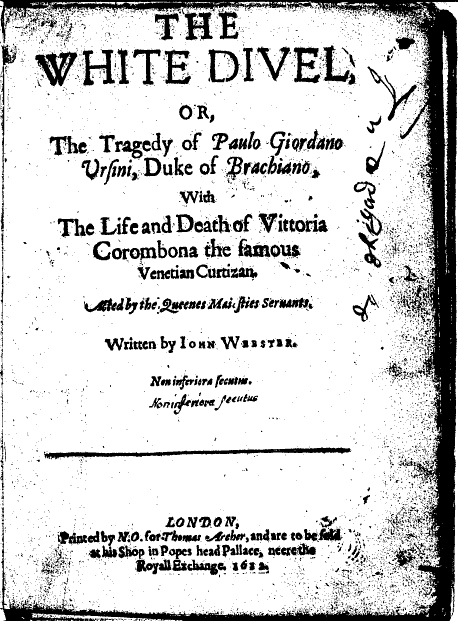 The play was a notorious failure when it premiered onstage. Webster complained that it was acted in the dead of winter before an unreceptive audience. And indeed the play's complexity, sophistication, and satire made it a poor fit with the repertory of at the , where it was first performed.

The play was successfully revived in by at the , and published again in . In published an adaptation of Webster's play titled "Injured Love".

The story itself is loosely based on a real event that occurred in Italy thirty years prior to the play's composition: the murder of in on 22 December, . Webster's dramatization of this event turned Italian corruption into a vehicle for depicting "the political and moral state of England in his own day," particularly the corruption at the royal court.

The title of "The White Devil" refers to a popular contemporary proverb which held that "the white devil is worse than the black." The play itself explores the differences between the reality of people and the way they depict themselves as a good, "white" or pure.

*Monticelso, a Cardinal. Afterwards Pope Paul the Fourth.
*Francisco De Medici, Duke of Florence; in the 5th Act disguised as a Moor, under the name of Mulinassar.
*Brachiano, otherwise Paulo Giordano Orsini, Duke of Brachiano, husband of Isabella, and in love with Vittoria.
*Giovanni, his son by Isabella.
*Lodovico, an Italian Count, but decayed.
*Antonelli, his friends, and dependents of the Duke of Florence.
*Gasparo
*Camillo, Husband of Vittoria.
*Hortensio, one of Brachiano's Officers.
*Marcello, an attendant of the Duke of Florence, and brother of Vittoria.
*Flamineo, his brother. Secretary to Brachiano.
*Jacques, a Moor, servant to Giovanni.
*Isabella, sister to Francisco De Medici, and wife to Brachiano.
*Vittoria Corombona, a Venetian lady. First married to Camillo, afterwards to Brachiano.
*Cornelia, mother to Vittoria, Flamineo, and Marcello.
*Zanche, a Moor. Servant to Vittoria.
*Also - Ambassadors, Courtiers, Lawyers, Officers, Physicians, Conjurer, Armourer, Attendants.

Webster based "The White Devil" on newsletter versions of the real life story of the killing of Vittoria Accoramboni. Such recollections detailed how Vittoria, of a proud but poor family, married the nephew of Cardinal Motalto. In 1580, she met Paolo Giordano Orsini, Duke of Bracciano, previously married to Isabella Medici of the famous family. Four years earlier Isabella had been murdered, most probably by her husband due to her infidelity.

Upon meeting Vittoria, the Duke falls desperately in love and arranges for the Cardinal's nephew to be killed off in order to secretly marry Vittoria. The Pope Gregory soon finds out and orders Vittoria and the Duke to part, and even resorts to Vittoria being imprisoned in Castel Angelo under suspicion of killing her husband.

However, in 1585 a new pope is elected and amid the confusion of change, Vittoria and Bracciano married and left Rome. In the play the Pope is misnamed . In fact, he was , Paul IV having died in 1559. Eight months after, the Duke dies and the Medici family, wishing to protect their family interests, challenge his will which dictates Vittoria in charge of his fortune. When Vittoria refuses to cooperate, the Medicis arrange for her to be killed. She dies in Padua.

Count Lodovico is banished from Rome for debauchery and murder: his friends promise to work for the repeal of his sentence. The Duke of Brachiano has conceived a violent passion for Vittoria Corombona, daughter of a noble but impoverished Venetian family, despite the fact they are both already married. Vittoria's brother Flamineo, employed as a secretary to Brachiano, has been scheming to bring his sister and the Duke together in the hope of advancing his own career. The plan is foiled by the arrival of Brachiano's wife Isabella, escorted by her brother and Cardinal Monticelso. They are both outraged by the rumours of Brachiano's infidelity and set out to encourage him to make the affair open, but before it happens Brachiano and Vittoria's brother arrange to have Vittoria's husband and Isabella murdered.

Vittoria is put on trial for the murder of her husband and although there is no real evidence against her, she is condemned by the Cardinal to imprisonment in a convent for penitent whores. Flamineo pretends madness in order to protect himself from awkward suggestions. The banished Count Lodovico is pardoned and returns to Rome: confessing he had been secretly in love with Isabella, he vows to avenge her death, Isabella's brother Francisco also plots revenge. He pens a love letter to Vittoria, which falls into the hands of Brachiano. It fuels his jealousy and forces him to elope with Vittoria. Cardinal Monticelso is elected Pope and as his first act he excommunicates Vittoria and Brachiano.

Vittoria and Brachiano, now married, hold court in Padua. Three mysterious strangers have arrived to enter Brachiano's service. These are Francisco, disguised as Mulinassar a Moor, and Lodovico and Gasparo, disguised as Capuchin monks, all conspiring to avenge Isabella's death. They begin their revenge with poisoning Brachiano. As he is dying, Lodovico and Gasparo reveal themselves to him. Next Zanche, Vittoria's Moorish maid, who has fallen in love with her supposed countryman Mulinassar, reveals to him the murders of Isabella and Camillo and Flamineo's part in them.

Flamineo is banished from court and sensing that his crimes are catching up with him he goes to see Vittoria. He tries to persuade her and Zanche to shoot each other. However, Vittoria and Zanche only shoot Flamineo, and thinking him dead, exult in his death and their escape. Much to their surprise Flamineo rises from the 'dead' and reveals to them the pistols were not loaded. While trying to exact his own revenge on Vittoria, Lodovico and Gasparo then enter the scene and complete their revenge by killing both of them. Giovanni and officers run to the scene, and, thinking that Giovanni is in danger, the officers shoot Lodovico.

The play was written for and first performed by at the in in the early months of 1612. The troupe usually offered simpler and more optimistic plays of the type written by their in-house dramatist, . The play staged immediately prior to Webster's seems to have been "If This Be Not a Good Play", a by Thomas Dekker. Webster's play failed at its debut performance. In the prefatory epistle to the quarto, Webster praised the actors, mentioning Richard Perkins by name, but complains of the winter weather and, above all, of the audience, whose intellect he compares to that of donkeys.

In 1925 the Renaissance Theatre mounted a heavily cut version featuring and . The production was not well reviewed, perhaps mainly because of a failure to understand the special requirements of Renaissance dramaturgy. Webster scholar F. L. Lucas asked in the , "Who can hope to speak passionate verse lying on the floor?"

In 's "", the end of "The Burial of the Dead" features two lines adapted from "The White Devil".