The Chestnut-fronted Macaw or Severe Macaw (Ara severus) is one of the largest of the Mini-Macaws. It reaches a size of around 45 cm (18 in) of which around half is the length of the tail.

They can be found over a large part of Northern South America from Panama south into Amazonian Brazil and northern Bolivia.

Their lifespan is listed as anything from 30 to 80 years of age. 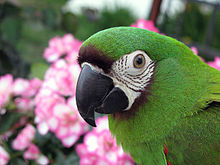 The Chestnut-fronted or Severe Macaw is mostly green in colour with patches of red and blue on the wings. The head has a Chestnut brown patch just above the beak. The beak is black and the patches around the eyes are white with lines of small black feathers. It is the only one of the miniature macaws that has lines of feathers in the bare patches around its eyes. In the wild their typically gregarious personality can become more aggressive at puberty giving them the name Severe. This tendency can be curbed in captivity but the species requires significant handling to make a tame pet. It is 45-50 cm (18-20 in) long and weighs 300-410 grams (10.6-14.5 oz.)

The Chestnut-fronted Macaw nest in a hole in a tree. The eggs are white and there are usually two or three in a clutch. The female incubates the eggs for about 28 days, and the chicks fledge from the nest about 70 days after hatching.[1]