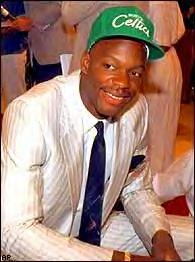 Leonard Kevin Bias (, &ndash; , ) was an American player who suffered a fatal that resulted from a less than 48 hours after being selected by the in the . Bias was the second player selected in the draft, after Brad Daugherty of the .

From , Bias attended Northwestern High School in , and subsequently the University of Maryland where he became a star player and an . Wearing number 34, he impressed basketball fans with his amazing leaping ability, his physical stature and his ability to create plays. During his college career Bias was considered one of the most dynamic players in the nation. With his ability to shoot, rebound, and hit the open man with a pass, Bias was rated by some draft publications as the most complete forward ever to come out of college. Bias was favorably compared by some to , [ [http://www.washingtonpost.com/wp-srv/sports/longterm/memories/bias/launch/bias2.htm Celtics Make Bias Second Overall Pick of Draft] June 18, 1986] even though Jordan himself was only in his second professional season at the time Bias was drafted.

Bias was selected by the defending NBA champion Celtics as the second overall pick in the . Bias and his father flew to , from , for an NBA Club draft acceptance and product endorsement signing ceremony with the Celtics' coaches and management, as well as with Adidas' Sports-Marketing Division. His father left alone, to return to Washington in the late afternoon. There he gave a short press conference for the local media at what was then known as (now ). The media were at the airport expecting to interview Len Bias. So his father had to "stand in" for him, reporting on their "day with the Celtics" and their appreciation of the beginning of a new chapter in his and his son's lives. Bias arrived back at Washington National alone later in the evening, on nearly the last Shuttle flight from Fact|date=October 2007. No media were present, and so far as is known he was met by no one. He retrieved his newly-leased sports car (a 1986 Nissan 300ZX, provided through his agent, as a kind of NBA/Sports Endorsement contract anticipation loan) from airport parking, and drove back to his room on the campus of the University of Maryland.

However, prior to, and concurrent with, some of the given timelines of his activities at the campus, Bias' vehicle was observed and recorded by undercover agents of the Washington, DC metropolitan police department "cruising" one of the city’s most notorious drug neighborhoods along Montana Avenue, in the northeast section of the city. Although the surveillance did not determine who specifically was in the vehicle, nor if the vehicle stopped for any purpose, they did estimate there were at least two persons, driver and passenger, in the vehicle, and they recorded its license number.

The campus timeline said he arrived back onto campus at around 11:00 p.m., and ate crab with some teammates and a member of the football team. He left campus at approximately 2 a.m. on the 19th and drove to an off-campus gathering, which he attended briefly before returning to his dorm in Washington Hall at 3:00 a.m. Bias took a dose of cocaine through an unknown route, which likely induced cardiac or a heart attack.

Bias went into convulsions. When the call to emergency services was made, Bias was unconscious and not breathing. All emergency medical team attempts to restart his heart and breathing were unsuccessful. According to the campus timeline, Bias collapsed sometime between 6:25 and 6:32 while talking with teammate Terry Long. According to Bias' sister, who only had a secondhand account of the story, Bias was sitting on a couch and leaned back as though he was going to sleep, but instead began to have a seizure. Bias was pronounced dead at Leland Memorial Hospital in Riverdale, Maryland, of a related to usage of cocaine. [ [http://www.washingtonpost.com/wp-srv/sports/longterm/memories/bias/launch/bias1.htm Traces of Cocaine Found in System] June 20, 1986] [ [http://www.washingtonpost.com/wp-srv/sports/longterm/memories/bias/launch/biasfrnt.htm The Len Bias Tragedy] ] [ [http://sports.espn.go.com/espn/page2/story?page=jackson/060619_bias The Legend of Len Bias] June 19, 2006] [ [http://proxy.espn.go.com/espn/page2/story?id=1216291 Bill Simmons: Still haunted by Len Bias] June 20, 2001] [ [http://www.findagrave.com/cgi-bin/fg.cgi?page=gr&GRid=9164 Len Bias' Gravesite] ]

Four days after his death, more than 11,000 people packed the Cole Field House, the university arena where Len Bias had played for the Terrapins, for a memorial service. Those speaking at the service included president Arnold "Red" Auerbach, who said he had planned for three years to get Len onto the Celtics. Auerbach added that the city of had not been so shaken since the assassination of .

The original suit claimed: (1) that Bias’ estate was owed a $1 million contract signing bonus that it was alleged Adidas entered into with Bias on the afternoon of his death at the signing ceremony where he also signed his rookie contract with the Boston Celtics Basketball Club; (2) that Bias’ parents were directly owed a similar amount as the beneficiaries on a “Jumbo” comprehensive liability policy that they had purchased from Lloyds Insurance (paying the initial annual premium in full) one year earlier; and (3) that Advantage International (by and through their agent - employee) had failed in their duty to their client (Bias) to obtain a life insurance policy (also of at least $1 million in value) as the parents asserted that Bias had instructed his agent to do.

In court, the parents failed on each assertion. First, the endorsement contract signed with Adidas was found to contain a “stand pat” clause of 72 hours. This meant that the signatories agreed not to take any action that relied upon, or to treat as binding, the performance terms of the contract for three days after their signing. Only at the beginning of the 73rd hour after the contract signing would the contract be in effect. In addition, if there were any change to any one of a set of conditions during the seventy-two hour window (such as the death of a signatory), the contract would immediately and automatically be terminated without prejudice to any of the parties.

Next, it was found that the Adidas-Bias contract contained an Excess Value Ratification Clause. This clause described the procedure required to implement the terms of the articles of incorporation of the Adidas company. The articles of incorporation stated that any contract at or above a specified dollar value signed by the officers or employees of the corporation, on Adidas' behalf, was to be regarded at the time of its signing, as only a preliminary notice of intent to inaugurate a contract between the parties. Further, the signatories of such a contract understood and agreed that the contract would not be regarded, relied upon, or treated as binding upon any party or the corporation unless and until the contract had been formally ratified through an affirmative vote of ratification by the Adidas Board of Directors.

It was therefore found that, at the time of signing, the signatory parties were aware that the performance terms of the endorsement contract (e.g., payment of the signing bonus) could not be considered by Bias or his estate as binding upon Adidas until three days later. The parties also knew at the time of signing that Bias’ death within the three day stand-still window was one of the conditions which automatically terminated the agreement between the parties (without prejudice to either) as soon as Bias was pronounced dead. And thus, being terminated, any subsequent meeting of the company’s Board of Directors to ratify a contract, which was terminated by a prior contract clause, would have been moot. Bias’s parents next thought they could at least collect upon the “Jumbo” liability policy they undertook from Lloyds Underwriters in 1985.

Bias and his family determined not to enter the 1985 NBA draft at the conclusion of his highly regarded junior year at the University of Maryland. Since there was a real financial risk that an injury or other unforeseen event during his senior year could harm or eliminate Bias' chance at a multi-million dollar professional basketball draft offer and signing, his parents on their own obtained a liability policy from Lloyds Underwriters. Bias’ parents hoped that the policy would insure against the chance that during his senior year Bias was injured in such a way that his potential NBA career was harmed or lost.

However, the nature and circumstances of Bias’ death and his personal life style as revealed at trial led to the finding and determination that Lloyds had decided that Bias had voided the policy well before his actual death by deliberately engaging in acts of known high risk. At trial persons who knew Bias personally and well testified that he was a well known recreational cocaine user. His parents could not offer any evidence that impeached this testimony.

The parents then argued that Advantage International and its agent had promised to acquire a one million dollar life insurance policy, which they never did. While this was true, it was a moot point because, as Advantage International argued, no insurance policy (especially a million dollar one) would have been granted to a known cocaine user. Furthermore, had Bias' agent and/or Advantage International misrepresented to an insurance underwriter that Bias was not a known cocaine user and he was found to be so in death, it would have been insurance fraud on their part. Such a policy would still have been void. Despite the estate's beneficiaries' claims that Bias was not an habitual, known user, Bias’ teammates, school trainers and others familiar with his habits testified under oath that he was. The estate's beneficiaries failed to offer any impeachment of this testimony either. Therefore, the Court of Appeals dismissed the complaint and affirmed the trial court's motion for summary judgment. Bias' parents appealed this decision all the way to the United States Supreme Court. In Bias v. Advantage International Inc (1990), The Supreme Court agreed with the Appeals decision and ruled against the parents.

On June 27, 1986, only eight days after Bias' death, another star athlete died of a cocaine overdose. Don Rogers, a first round pick, and defensive rookie of the year with the NFL Cleveland Browns, died at his mother's home.

On , , prosecutors dropped all charges against Long and Gregg in exchange for their testimony against Tribble

Also on , Kenneth Mark Fobbs, Tribble's roommate, was charged with perjury for allegedly lying to the grand jury about the last time he saw Tribble

The circumstances surrounding Bias' death threw the University and its athletics program into turmoil. An investigation revealed that Bias was 21 credits short of the graduation requirement despite having used all his athletic eligibility

The controversy prompted athletic director to resign October 7, 1986, with Driesell following suit October 29, 1986, after serving as the Terrapins' coach for 17 years

On December 5, 1990, Len's younger brother, James Stanley Bias III, known as Jay and also a promising young basketball talent, was shot to death at age 20 following a dispute in the parking lot of , a Hyattsville shopping mall located just miles from the University of Maryland. Two gunmen had allegedly fired several times into the vehicle Jay and two friends were in, and Jay was shot twice in the back. He was pronounced dead at the same hospital where Len had died, and was buried next to him at Lincoln Memorial Cemetery [ [http://query.nytimes.com/gst/fullpage.html?res=9C0CEFDC133FF936A35751C1A966958260 "Len Bias's Brother Dies in Shooting," "New York Times", 12/5/90 (retrieved 11/2/07)] ] .