Olympia Jean Snowe (born February 21, 1947), née Bouchles, is the senior United States Senator from Maine and a member of the Republican Party. Snowe has become widely known for her ability to influence the outcome of close votes, including whether to end filibusters.[1] She and her fellow Senator from Maine, Susan Collins, are regarded as moderates within their party. In 2006, she was named one of America's Top Ten Senators by Time Magazine.[2]

Official photo of then Representative Snowe from 1980

Snowe was born Olympia Jean Bouchles in Augusta, Maine, the daughter of Georgia Goranites and George John Bouchles. Her father immigrated to the United States from Sparta in Greece.[3] She is a member of the Greek Orthodox Church.[4][5]

Snowe's early life had its share of tragedies; when she was nine, her mother died of breast cancer, and her father died of heart disease barely a year later. Orphaned, she was moved to Auburn, Maine, to be raised by her aunt and uncle, a textile mill worker and a barber, respectively, along with their five other children. Her brother John was raised separately, by other family members. Within a few years, disease would also claim her uncle's life.

Following her mother's death, Snowe was sent to St. Basil's Academy in Garrison, New York, where she remained from the third grade to the ninth. Returning to Auburn, she attended Edward Little High School, before entering the University of Maine in Orono, Maine, in 1969, where she earned a degree in political science. Shortly after graduation, Bouchles married her fiancé, Republican state legislator Peter Snowe. She received an honorary degree from Bates College in 1998, and another from the University of Delaware in 2008. 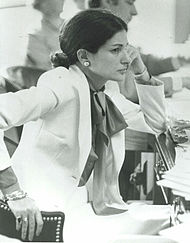 Snowe entered politics and rose quickly, winning a seat on the Board of Voter Registration and working for Congressman (later U.S. Senator and U.S. Secretary of Defense) William Cohen. Tragedy struck Snowe again in 1973, when her husband was killed in an automobile accident. At the urging of family, friends, neighbors and local leaders, Snowe ran for her husband's Auburn-based seat in the Maine House of Representatives at the age of 26 and won. She was re-elected to the House in 1974, and, in 1976, won election to the Maine Senate, representing Androscoggin County. That same year, she was a delegate to both the state and national Republican conventions.

Snowe was elected to the U.S. House of Representatives in 1978, and represented Maine's 2nd Congressional District from 1979 to 1995. The district takes in most of the northern two-thirds of the state, including Bangor and her hometown of Auburn. She served as a member of the Budget and International Relations Committees.

Snowe married John "Jock" McKernan, then Governor of Maine, in February 1989. Tragedy struck Snowe yet again in 1991 when her stepson Peter McKernan died from a heart ailment at the age of 20. Snowe and McKernan had served together in the United States House of Representatives from 1983 to 1986, when McKernan represented the 1st District. While Snowe was First Lady of Maine from 1989 to 1995, she served as a U.S. Representative and was elected and sworn in as a United States Senator.

In 1994, when Senate Majority Leader George J. Mitchell declined to run for re-election, Snowe immediately declared her candidacy for the seat. The Democratic nominee was her House colleague, 1st District Congressman Tom Andrews. Snowe defeated Andrews 60–36%, carrying every county in the state. Snowe was part of the Republican election sweep of 1994, when the Republican party captured both the House and Senate for the first time since 1954. Snowe was easily reelected in 2000 over State Senate President Mark Lawrence, increasing her winning margin to 69%-31%.

Snowe was an important voice during the Senate's 1999 impeachment trial of then-President Bill Clinton. She and fellow Maine Senator Susan Collins sponsored a motion that would have allowed the Senate to vote separately on the charges and the remedy — a "finding of fact" resolution. When the motion failed, Snowe and Collins voted to acquit, arguing that Clinton's perjury did not warrant his removal from office.

Senator Olympia Snowe and the Secretary of the Navy meet in the boardroom at Supervisor Shipbuilding, Bath Iron Works

Her occasional breaks with the Bush administration drew attacks from conservative Republicans; the Club for Growth and Concerned Women for America label her a "Republican In Name Only" (RINO).[6] In February 2006, TheWhiteHouseProject.org named Snowe one of its "8 in '08", a group of eight female politicians who could possibly run and/or be elected president in 2008.[7]

In April 2006, Snowe was selected by Time as one of "America's 10 Best Senators."[8] She was the only woman so recognized. Time praised Snowe for her sensitivity to her constituents, also noting that: "Because of her centrist views and eagerness to get beyond partisan point scoring, Maine Republican Olympia Snowe is in the center of every policy debate in Washington."

Snowe is the fourth woman to serve on the Senate Armed Services Committee and the first to chair its seapower subcommittee, which oversees the Navy and Marine Corps. In 2001, Snowe became the first Republican woman to secure a full-term seat on the Senate Finance Committee.

Snowe was the youngest Republican woman ever elected to the United States House of Representatives; she is also the first woman to have served in both houses of a state legislature and both houses of the U.S. Congress. Additionally, she is the first Greek-American congresswoman. With her 1989 marriage to McKernan, she became the first person to simultaneously be a member of Congress and First Lady of a state. She has never lost an election in 35 years as an elected official, and in the 2006 midterm senatorial elections, Snowe won with a reported 73.99% of votes. Seven months ahead of the election, she had already raised $2.1 million.[10]

On May 23, 2005, Snowe was one of fourteen senators dubbed the Gang of 14, who defused a confrontation between Senate Democrats (who were filibustering several judicial nominees) and the Senate Republican leadership (who wanted to use the nominations as a flashpoint to eliminate filibusters on nominees through the so-called nuclear option). The Gang-brokered compromise precluded further filibusters and the implementation of the nuclear option for the remainder of the 109th Congress; under its terms, the Democrats retained the power to filibuster a Bush judicial nominee in an "extraordinary circumstance," and nominees (Janice Rogers Brown, Priscilla Owen and William Pryor) received a simple majority vote by the full Senate.

The Gang later played an important role in the confirmation of Chief Justice John Roberts and Associate Justice Samuel Alito, as they asserted that neither met the "extraordinary circumstances" provision outlined in their agreement. Snowe ultimately voted for both Roberts and Alito.

Olympia Snowe in a picture of the 16 female senators in the 110th US Congress. 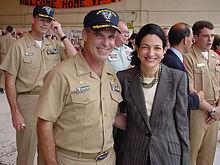 Snowe shares a centrist ideology with Maine's junior Senator, Susan Collins, who is considered a "half-turn more conservative" than Snowe.[11] Snowe supports legalized abortion and some gay rights, and though she previously voted to block the repeal of Don't Ask Don't Tell, she was one of eight Republican senators to vote for the repeal on December 18, 2010. In her 2006 re-election campaign, she was one of two Republican Senate candidates endorsed by the prominent gay rights organization, the Human Rights Campaign (the other was Lincoln Chafee of Rhode Island)[12]. She also supports the death penalty and strongly supports the war on drugs and the United States embargo against Cuba.

Snowe supported both President Clinton's involvement in Kosovo and President George W. Bush's invasions in Afghanistan and Iraq. On fiscal issues, she has voiced support for cutting taxes as economic stimulus, although she joined fellow Republican senators Lincoln Chafee and John McCain in voting against the Bush tax cuts in 2003. However, voted for the extension in 2011. She opposes most free trade agreements, including the North American Free Trade Agreement (NAFTA), the Central America Free Trade Agreement (CAFTA). She was the only Republican to vote for the Tax Fairness and Economic Growth Act of 1992. She is a strong supporter of environmental protections. Both Snowe and fellow Maine Senator Susan Collins have embraced strong gun control measures following the Columbine High School shooting in 1999.

In the 110th Congress, Snowe worked to ensure passage of a genetic non-discrimination act, which she had previously worked to pass for nearly eight years; opposed cutting loans through the Small Business Administration; offered legislation aimed at reducing the price of prescription drugs and insurance costs for small businesses; and became a leading voice among Congressional Republicans expressing concerns over President Bush's plans for the privatization of Social Security.

In 2008, Snowe endorsed Republican candidate John McCain for President of the United States.[13]

In the 111th Congress, Snowe backed the release of additional Troubled Asset Relief Program (TARP) funds and the American Recovery and Reinvestment Act. While she opposed President Obama's budget resolution, she pledged to work in a bipartisan manner on the issues of health care reform and energy.[14]

On October 13, 2009, Snowe voted for the Finance Committee's health care reform bill. However, she stated that she might not support the final bill because of reservations.[15] In December 2009, Snowe voted against cloture for two procedural motions and ultimately against the Senate Health Care Reform Bill.[16] Snowe again voted against health care reform when she voted "no" on the Health Care and Education Reconciliation Act of 2010.[17] 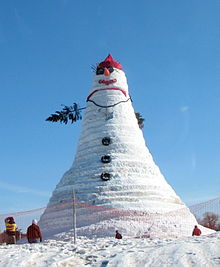