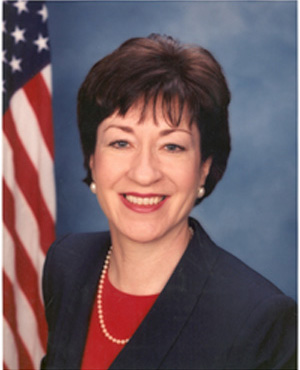 Susan Margaret Collins (born , in ) is the junior U.S. Senator from and a member of the Republican Party. Collins is running for re-election in 2008.

Collins is a graduate of . She worked for Senator from 1975 until 1987, when she became chair of the Maine commission on financial regulation. She served in this position until 1992, when she briefly served as regional director of the . She was the Republican candidate in the Maine gubernatorial election of 1994, but both she and the Democratic candidate, former Governor Joe Brennan, were defeated by the Independent candidate, .

In 1996, when Senator announced his retirement, Collins announced her Senate candidacy. After a difficult three-way primary, she defeated Democrat Joe Brennan in the general election with 49% of the vote to Brennan's 44%. She was reelected in 2002 over State Senator (D), 58%-42%.

She is a member of The and supports stem-cell research. She is also a member of The Republican Majority For Choice, , The Wish List, , and It's My Party Too. Her voting record is moderate, which puts her to the left of most Republicans in the Senate, and causing some Republicans to label her as a "Republican in Name Only," ().

She supports in the 2008 election for President of the United States. [cite web |url=http://www.johnmccain.com/supporters/|title=McCain List of Supporters |publisher=http://johnmccain.com ]

In the 1990s, Collins played an important role during the U.S. Senate's impeachment trial of when she and fellow Maine Senator sponsored a motion that would have allowed the Senate to vote separately on the charges and the remedy. When the motion failed, both Snowe and Collins subsequently voted to acquit, believing that while Clinton had broken the law by committing , the charges did not amount to grounds for removal from office.

Collins voted with the majority in favor of the authorizing President George W. Bush to go to war against Iraq, on , . [cite web |url=http://www.senate.gov/legislative/LIS/roll_call_lists/roll_call_vote_cfm.cfm?congress=107&session=2&vote=00237 |title=Roll call for H.J.Res. 114 |publisher=United States Senate ] On , , she voted with the (-proof) minority against a bill restoring the right of . [cite web |url=http://www.senate.gov/legislative/LIS/roll_call_lists/roll_call_vote_cfm.cfm?congress=110&session=1&vote=00340 |title=Roll call for H.R. 1585/S.Amdt. 2022 |publisher=United States Senate ]

On , , with Senate Democrats, Collins was one of the three Republican Senators to oppose the . She did however join the majority of Republicans in voting for to increase penalties for killing the unborn while committing a violent crime against the mother.

On , , Collins was one of fourteen moderate senators to forge a compromise on the Democrats' use of the judicial , thus allowing the Republican leadership's attempt to control debate without having to exercise the so-called "". Under the agreement the Democrats would retain the power to filibuster a Bush judicial nominee only in an "extraordinary circumstance", and the three Bush nominees (, , and William Pryor) would receive a vote by the full Senate.

Collins voted against the restrictions on travel to Cuba, harsher punishments for drug users, and amending the U.S. Constitution to prohibit same-sex marriages. She has also joined the moderates in the Republican Party and a vast majority of Democrats in supporting campaign finance reform laws. In 2003 she was the only Republican to vote for limiting a tax cut in order to help rural hospitals.

Collins has voted against some free-trade agreements including . In 1999 she was one of only four Republicans (along with her colleague Olympia Snowe) to vote for a Wellstone amendment to the Trade and Development Act of 2000 which would have conditioned trade benefits for Caribbean countries on "compliance with internationally recognized labor rights." This vote, joined only by Republicans and , put her to the political left of many Democratic senators including 2008 presidential contenders , , and .

Collins coauthored, along with Senator Joe Lieberman, the Collins-Lieberman Intelligence Reform and Terrorism Prevention Act of 2004. This law implemented many of the recommendations of the 9-11 Commission modernizing and improving America's intelligence systems.

Collins voted in favor of and for the extension of the . [cite web
url=http://www.senate.gov/legislative/LIS/roll_call_lists/roll_call_vote_cfm.cfm?congress=107&session=1&vote=00165
title=On Passage of the Bill (H.R. 1836, as amended )
publisher=United States Senate
date=May 23, 2001] [cite web
url=http://www.senate.gov/legislative/LIS/roll_call_lists/roll_call_vote_cfm.cfm?congress=108&session=1&vote=00196
title=On the Conference Report (H.R. 2 Conference Report )
publisher=United States Senate
date=May 23, 2003] [cite web
url=http://projects.washingtonpost.com/congress/109/senate/2/votes/229/
title=Motion to Invoke Cloture on the Motion to Proceed to Consider H.R.5970; Estate Tax and Extension of Tax Relief Act of 2006
publisher=washingtonpost.com
date=August 3, 2006] She offered an amendment to the original bill that allowed for tax credits to school teachers who purchase classroom materials. [cite web
url=http://thomas.loc.gov/cgi-bin/bdquery/z?d107:SP00675:
title=S.AMDT.675 to H.R.1836
publisher=Library of Congress
date=5/17/2001 ]

Collins, joining the Senate majority, voted in favor of the , an amendment to the . Additionally, she voted to deny congressional oversight of spying programs. [cite web
url=http://www.senate.gov/legislative/LIS/roll_call_lists/roll_call_vote_cfm.cfm?congress=109&session=2&vote=00256
title=S.Amdt. 5095 to S. 3930
publisher=United States Senate
accessdate=2008-07-28]

Siding with the majority, Collins voted for the that stripped the right to a writ of and access to a lawyer for prisoners held by the U.S. government. [cite web
url=http://www.senate.gov/legislative/LIS/roll_call_lists/roll_call_vote_cfm.cfm?congress=109&session=2&vote=00259
title=S. 3930 As Amended, A bill to authorize trial by military commission for violations of the law of war, and for other purposes.
publisher=United States Senate
date=September 28, 2006
accessdate=2008-07-28] She voted against an amendment to that bill that would have allowed defendents the right to habeus corpus. [cite web
url=http://www.senate.gov/legislative/LIS/roll_call_lists/roll_call_vote_cfm.cfm?congress=109&session=2&vote=00255
title=Specter Amdt. No. 5087, To strike the provision regarding habeas review.
publisher=United States Senate
date=September 28, 2006
accessdate=2008-07-28]

Agreeing with the majority in both parties, Collins voted in favor of the , [cite web
url=http://www.senate.gov/legislative/LIS/roll_call_lists/roll_call_vote_cfm.cfm?congress=110&session=1&vote=00349
title=Kyl Amdt. No. 3017 as Modified, To express the sense of the Senate regarding Iran.
publisher=United States Senate
date=September 26, 2007
accessdate=2008-07-28] which could give and the the authorization for military force against . [cite web
url=http://thinkprogress.org/2007/09/25/kyl-iran-fox/
title=Lieberman-Kyl Amendment Seeks To Escalate Possibility Of Military Action Against Iran
publisher=Think Progress
date=September 25th, 2007
accessdate=2008-07-28]

In September 2008, Collins joined the , a bipartisan group seeking a comprehensive energy reform bill. The group is pushing for a bill that would encourage state-by-state decisions on offshore drilling and authorize billions of dollars for conservation and alternative energy. [http://www.startribune.com/politics/28297749.html]

Collins is [http://www.politicalbase.com/index.php?obj=10&action=showPeopleState&year=2008&officeId=10&changed=&c1=32765&c2=36033&c3=0&c4=0 running for re-election] in 2008 and on , , Representative (District 1) filed papers to run against her. On the same day a poll was released by Critical Insights — an independent polling firm in Portland, Maine — which showed Collins was a strong early favorite. The poll of 600 likely voters showed Collins leading Allen statewide 57% to 30%, with 65% of the important independent vote.

With just nine weeks to election day on November 4th, according to a new Rasmussen poll Senator Collins leads Rep. Tom Allen by fifteen points, 53%-38%. Among independents, Senator Collins leads comfortably, 55%-32% and is viewed favorably by independents with a 67% approval rating among them. [http://www.seacoastonline.com/apps/pbcs.dll/article?AID=/20080724/NEWS/80724033/-1/NEWS20]

Independent Connecticut Senator has stated that he plans to campaign for Collins's re-election. Fact|date=July 2008