Enemy at the Gates

Enemy at the Gates 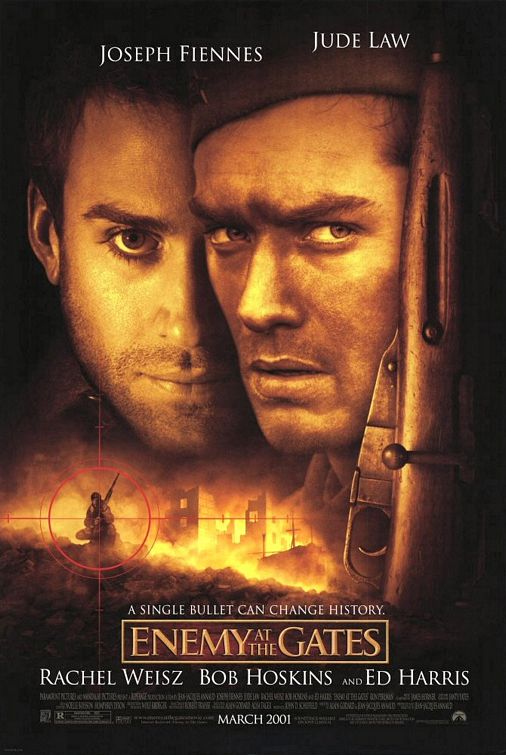 The film's title is taken from William Craig's 1973 nonfiction book "", which describes the events surrounding the from -. [ [http://www.epilog.de/Film/Dr_Dz/Texte/Duell_Enemy_at_the_Gates_USA_D_2001_Interview.htm Interview] with in German, referenced by ] . It is based on a duel mentioned in the book that developed between Soviet Vasily Grigoryevich Zaytsev and his German rival, , as they stalk each other during the battle. The movie is also partially based on the book "". The film was released under the title "" in continental Europe, although "" is printed in smaller lettering underneath the main title on the box of the DVD release.

, 1942. The German invasion of Russia has reached the city of Stalingrad, reducing the city to rubble as the Soviet and Nazi armies battle for the fate of the World. Vassili Zaitsev (), a poorly educated peasant from conscripted into the , manages to survive both a suicidal charge without a weapon into the front lines of the German attack and the machine gunners shooting survivors who tried to flee. Acquiring a rifle, Zaitsev — an expert marksman — manages to kill four German officers (and the driver of their car, a general duties soldier) in a row with the only five bullets he has, impressing a witnessing political commissar, Danilov (). Writing an account of Zaitsev's achievement in the military newspaper, Danilov manages to inspire the broken, morale-sapped people of the Soviet Union to renew their efforts against the German invaders, and Zaitsev becomes a national hero and propaganda icon.

The bond between the two men is to be tested, as both have fallen in love with Tania (), a citizen of the city who has volunteered in the local militia. Fearing the s and the demoralizing effect they are having on their own men, the Germans have sent for Major (), the top in the German army, to seek out and eliminate Zaitsev.

The story focuses on the exploits of (), a Ural peasant who was taught how to hunt and shoot by his grandfather, now fighting on the Eastern Front of World War II. A soldier, he is traveling in a train's cattle truck along with other soldiers and civilians, where he notices a young woman () before the train is converted into a military convoy headed for , a city that is now under attack by the German Army. Upon arriving on the city's outskirts, the soldiers attempt to cross the on unprotected river barges, bombarded by German dive bombers and artillery, resulting in many casualties. When the survivors disembark on the other side, only half of them are given rifles, while the rest - among them Vassili - are given only a five round clip of ammunition. As their fellows are shot down, the men with the clips are to use the dead men's rifles. In a hopeless charge against the well-armed Germans, the Red Army soldiers are massacred both by the enemy, and by the Soviet commissars who shoot anyone who retreats.

After the battle, a car races through the streets, under artillery fire. Knocked off the road, the driver - Lieutenant Danilov (), a Soviet second class - flees to the safety of a drained fountain and feigns death amongst the corpses within. Here he comes upon Vassili, also feigning death, and watches with amazement as the young soldier kills five nearby German soldiers with five shots from the rifle Danilov hands him. Later, () arrives in Stalingrad to coordinate the city's defences. He demands suggestions to improve morale, and Danilov suggests publicizing "heroes" for the people to idolize. Vassili's exploits are soon national news, Danilov now a senior lieutenant and on the general staff tells Vassili that he is transferred from the regular forces to sniper division. As Zaitsev and his fellow snipers take their toll on the German forces, he and Danilov — the author of the articles — become firm friends. Vassily then learns that the girl he had seen on the train (Tania), is a private in the local militia. Danilov, smitten with the woman, arranges to have her transferred to an intelligence/intercept unit away from the battlefield, using her ability to speak German as the justification.

With Zaitsev's increasing fame, and the high casualties (especially officers) being inflicted by the Soviet snipers, Major () is deployed to Stalingrad to help counter this new threat. A renowned marksman himself, and head of the German Army Sniper School, the aristocratic König immediately begins plotting how to best take out young Zaitsev.

The next day, Vassili, along with two other snipers, is tasked with killing a German sniper lurking in the Department Store sector. Zaitsev, now a sergeant, apparently dispatches the enemy with a single shot. When two of them go to retrieve the man's dog tags, they discover that it was only a decoy. The still-hidden König, having already killed their other team member without their knowledge, kills the other sniper with Zaitsev, during an air raid after she panics; Zaitsev manages to escape. When the Red Army command had learned that Major König was sent to specifically kill Vassili, a fellow sniper (and former student of König's before the war) named Koulikov () is sent to assist Vassili in dispatching the Major, however, and in a failed plan to draw him out, Koulikov is killed, shaking Vassili's spirits considerably.

After a drinking conversation with Khrushchev, in which Danilov is pressured into seeing the sniper business finished, Danilov goes to see Tania, who, after Danilov makes an advance, realizes he is Jewish and tells him about her fathers wishes to live in Palestine. Since they are Jewish, he believed they have a duty to defend Palestine so, he taught her how to shoot. She then requests a favor from him, that he reassign her to sniper division.

Danilov recruits a double agent - a young boy named (), a patriotic youth who occasionally does small jobs for the Germans. Danilov then goes to tell Vassili, and as Vassili is telling Danilov that he does not believe he is good enough to take out König, Danilov assures him that next time he will be one step ahead of König, since Sacha is positioned to give König false information about Vassili's whereabouts, allowing Vassili opportunities to ambush him. Danilov then asks a favor of Vassili, that he convince Tania that sniper division is not a place for her.

Vassili then goes to Tania and attempts to convince her that sniping is more intimate then infantry fighting. Tania is not swayed and tells Vassili that she just recently read a dispatch that was a list of Jewish people the Germans had rounded up to ship from Stalingrad to Germany. Her parents were on the list, and were executed after they stopped the train over a bridge and bound couples and families together in pairs. To save ammo the Germans only shot one person from each pair, to drown the other. Vassili then hands Tania a rifle, Vassili tells her it is Koulikov's rifle, that it is a good rifle. She accepts and thanks him.

Running alongside the main plot is Vassili and Danilov's attraction to Tania, which causes underlying tension between the two men amidst the chaotic atmosphere, especially when Tania finally chooses Vassili as her lover. This personal conflict comes to a head when Tania is presumed to be dead after being struck down by shrapnel. As Vassili and Danilov hunt for König to avenge Sacha, Danilov laments his jealousy for Vassili and his disenchantment with the communist cause as a result. Danilov then exposes himself in a final act of friendship, allowing König to shoot him — revealing the Major's position. König goes to inspect the body, assuming it is Vassili, but is quickly shot by Vassili.Two months later, it is revealed that Stalingrad is liberated and Zaitsev finds Tania in a hospital, safely evacuated and recovering.

*The fighting in was actually shot in , , ironically enough.
*The crossing was filmed near , .

The film was criticized both in and in the West for taking considerable liberties with the facts; in both its plot and in the depictions of its characters (notably Fiennes' character, Danilov, and the German sniper König), it varies widely from the historical record.Fact|date=February 2008

Virtually all of the actors in the movie have British accents despite the fact the characters they play are Russian and German.

Some Soviet Stalingrad veterans were so offended by inaccuracies in the movie and what they saw as the insulting way in which it portrays the Red Army, that on , soon after it was shown in Russia, they addressed their grievances to the , demanding the film be banned, but this request was not granted.Fact|date=June 2008

Historian suggests in his book, "Stalingrad", that, while Zaitsev was definitely a real person, the story of his duel (dramatized in the film) with König is fictional. Although William Craig's book "Enemy at the Gates: The Battle for Stalingrad" includes a "sniper's duel" between Zaitsev and König, the sequence of events in the film is fictional.Fact|date=April 2007

The initial battle sequence in Stalingrad is recreated in the PC game , where the character is handed five rounds of ammunition (without a rifle) and sent to charge towards the German forces, while being watched by Soviet machine gunners. Later, he has to snipe 5 German officers as part of the first Russian mission.