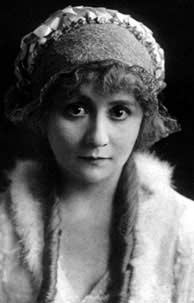 Bessie Barriscale (, - , ) was an American and actress, and a major star for producer in the late 1910s.

Barriscale was born Elizabeth Barry Scale in to Irish immigrants from County Cork. Her cousins were actresses Edith and . Barriscale began her film career in 1913, and worked intensively for New York Motion Picture Company and (among other studios) until she announced her retirement in the early 1930s. In 1918, Barriscale was contracted by J.L. Frothingham of B.B. Features and the Roberson Cole Company to make sixteen films. B.B. Features was an Arizona corporation. The movies were to be completed, produced, and delivered by January 21, 1921. At this time Miss Barriscale's managers insured her life for a half million dollars against eventualities. The total cost of the features totaled more than $1,000,000.

Barriscale was enthusiastic about and wanted to bring one of his plays to the screen. The actress was an excellent swimmer. In "The Woman Michael Married" (1919) she was featured in a movie adapted from a novel by . Barriscale went so far as to hire a swimming and diving instructor and took lessons in . A ninety-pool was constructed at Brunton Studios where the scenes were shot. The film was directed by Henry Kolker.

In 1919, she traveled with her husband, actor, director, and film producer and their small son, on a world tour. They anticipated producing motion pictures during their journey and traveled with a cameraman.

In 1921, Barriscale came east to play in "The Skirt". The play was to travel to and after opening in . Later the production would appear in . In prior years Barriscale participated in plays for the Belasco Theater in and once appeared in Belasco productions, notably "Bird of Paradise" written by Richard Walton Tully. She played a princess named Luana. During the early years, Barriscale was in vaudeville, with two-a-day, three-a-day, and even four-a-day performances not uncommon.

Actor purchased the home of Bessie Barriscale in Pellisier Square, Los Angeles in February 1922. The residence was valued at $45,000.

Barriscale returned to the stage in "Women Go On Forever". She had been married 21 years and had a son age twenty at this time. The production opened at the Hollywood Music Box in March 1928. She played a "housewife type," and confessed to having rehearsed for the role in a gingham dress she took from the wardrobe of her home. She said she had been working at home for several years and had just learned to cook.