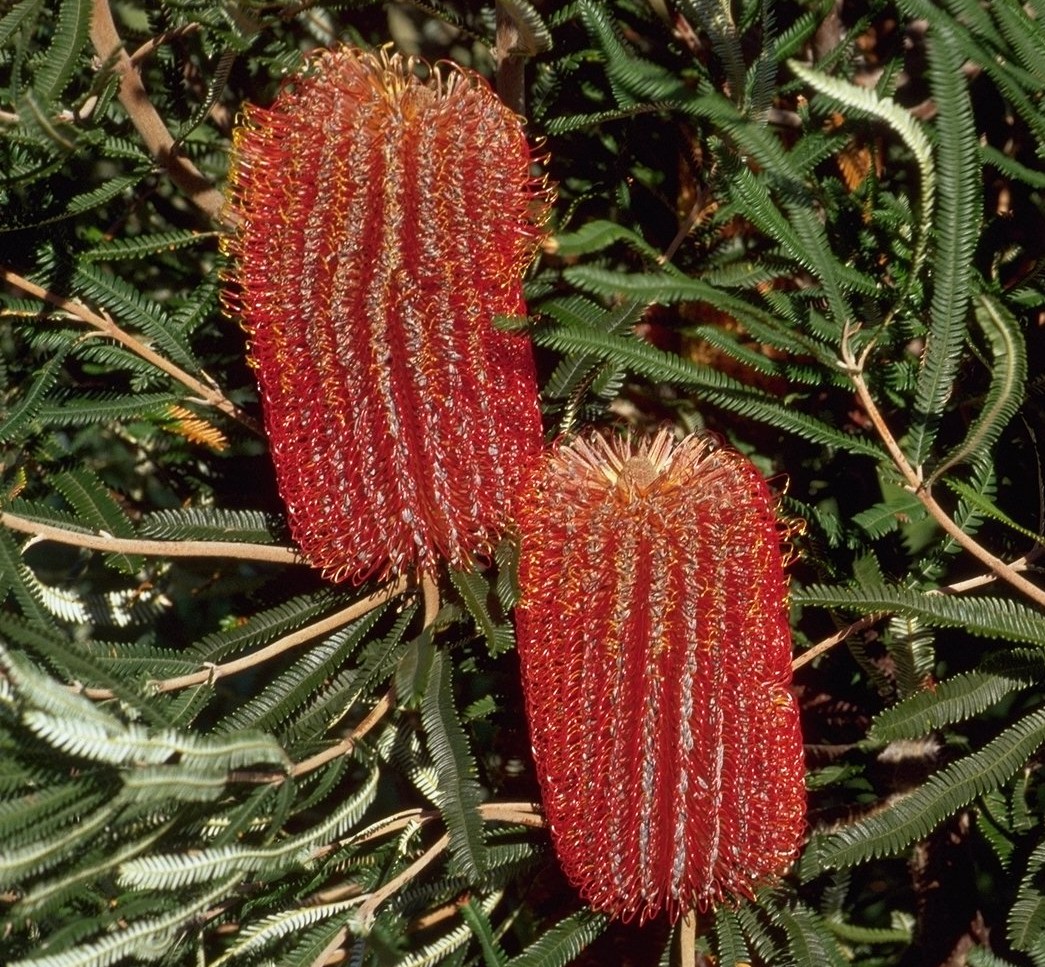 "Banksia brownii", commonly known as Feather-leaved Banksia or Brown's Banksia, is a of that occurs in southwest . An attractive plant with fine feathery leaves and large red-brown flower spikes, it usually grows as an upright bush around two metres (7 ft) high, but can also occur as a small tree or a low spreading shrub. First collected in 1829 and published the following year, it is placed in "" subgenus "Banksia", section "Oncostylis", series "Spicigerae". There are two genetically distinct forms.

"B. brownii" occurs naturally only in two population clusters between Albany and the in southwest Western Australia. In the Stirling Range it occurs among on rocky mountain slopes; further south it occurs among in shallow nutrient-poor sand. It is rare and endangered in its natural habitat, with all major populations currently threatened by "Phytophthora cinnamomi" dieback, a disease to which the species is highly susceptible. Other threats include loss of habitat, commercial exploitation and changes to the fire regime.

Highly valued by 's horticultural and cut flower industries, "B. brownii" is widely cultivated in areas not exposed to dieback. It prefers a sheltered position in soil with good drainage, and must be provided with some moisture over summer.

"B. brownii" usually grows as an upright bush between one and three metres (3–10 ft) high, but it can also grow as an openly branched small tree to six metres (20 ft) in sheltered gullies, or as a low, spreading shrub in exposed locations such as the peaks of the Stirling Range. The bark is a grey-brown colour, smooth and thin, with s. The leaves are long and thin, from three to ten centimetres (1–5 in) long, and five to ten millimetres (Fraction|3|16–Fraction|3|8 in) wide. Dark green and hairless above but with a hairy white underside, they are easily recognised by their feather-like appearance, caused by the fact that they are finely divided almost back to the , into as many as 70 thin tapered lobes.

Flowers occur in typical "Banksia" "flower spikes", s made up of hundreds of pairs of flowers densely packed in a spiral around a woody axis. "B. brownii"s flower spike is a metallic red-brown colour, roughly cylindrical, 6 to 19 centimetres (2–7½ in) high and eight to ten centimetres (3–4 in) wide. Each flower consists of a tubular made up of four united s, and one long wiry style. Perianths are cream at the base and grey-brown at the end. Styles are rusty red-brown with a cream tip, and downwardly hooked rather than straight. The style end is initially trapped inside the upper perianth parts, but breaks free at .

Flower spikes are held erect and are typically terminal on a branch; often other branchlets grow up and around a spike from below. The fruiting structure is a stout woody "cone", around five centimetres (2 inches) in diameter, with a hairy appearance caused by the persistence of old withered flower parts. A "cone" may be embedded with up to 60 follicles, although usually there are very few or even none at all.

"Banksia brownii" was first collected near in 1829 by William Baxter, who named it in honour of botanist Robert Brown. A formal description was published by Brown in his 1830 "";

demoted "Eubanksia" to sectional rank in his 1856 classification, and divided it into four series, with "B. brownii" placed in series "Dryandroideae".

published a new taxonomic arrangement of "Banksia" in his landmark 1981 monograph "". Endlicher's "Eubanksia" became "B." subg. "Banksia", and was divided into three sections, one of which was "Oncostylis". "Oncostylis" was further divided into four series, with "B. brownii" placed in series "Spicigerae" because its inflorescences are cylindrical.

In 1996, and Pauline Ladiges published a new arrangement for the genus, after cladistic analyses yielded a significantly different from George's arrangement. Thiele and Ladiges' arrangement retained "B. brownii" in series "Spicigerae", placing it in "B." subser. "Occidentales" along with "B. occidentalis" (Red Swamp Banksia), "B. seminuda" (River Banksia), "B. verticillata" (Granite Banksia) and "B. littoralis" (Swamp Banksia).

Since 1998, has been publishing results of ongoing cladistic analyses of data for the subtribe , which is comprised of "Banksia" and "". With respect to "B. brownii", Mast's results are somewhat at odds with those of both George and Thiele and Ladiges, finding it to be more closely related to "B. nutans" (Nodding Banksia) and "B. quercifolia" (Oak-leaved Banksia) than to many of the "Spicigerae". Overall, the inferred is very greatly different from George's arrangement, and provides compelling evidence for the of "Banksia" with respect to "Dryandra".

Three genetically distinct forms of "B. brownii" are recognised: the better known forms are a "mountain form" with a shrubby habit, short thin hard leaves, and a squat inflorescence; and a "Millbrook Road form", with a tree habit and longer, wider, soft leaves.

Coastal plants begin to flower at around five years from seed, but plants in the Stirling Range take much longer to mature. In one Stirling Range population, only 15% of plants had flowered after eight years. Flowering time is highly variable, but in general it occurs between March and August, with a peak around June. More flowers open during the day than at night.

As with other "Banksia" species, "B. brownii" is a heavy producer of nectar, and serves as a food source for a range of nectariferous birds, mammals and insects. Honeyeaters such as "" (New Holland Honeyeater), "" (Western Spinebill) and "" (Red Wattlebird) are frequent visitors that often carry heavy loads, making them important pollinators. Nocturnal mammals such as "" (Bush Rat) and "" (Honey Possum) also carry heavy pollen loads, but the foraging behaviour of Bush Rats suggests that these may transfer pollen only over very short distances. Invertebrate visitors include the introduced "" (Western Honeybee), native bees, flies and s; bees appear to be effective pollinators, but ants and flies forage only at the base of flowers and do not come in contact with plant pollen.

The species is partly self-compatible, as some seed is set when pollinators are excluded. Selection against self-pollinated seed has been observed,

It has a low rate of fruiting, with less than 1% of flowers developing into follicles, and more than half of the inflorescences failing to form any follicles at all.

A small proportion of follicles open and release their seed spontaneously, but most remain closed until stimulated to open by . Bushfire kills the maternal plant, which has neither thick bark nor s, but the subsequent shedding of seed allows the population to regenerate. Seed predation continues after its release: in one study, "B. brownii" seeds were placed on the ground in both burnt and unburnt sides; almost all were eaten by parrots within four weeks.

Threats to "B. brownii" include loss of habitat due to land clearing, commercial exploitation, disease, and changes to the fire regime. The fragmentation of populations is also of concern, as it causes the genetic diversity of the species to decline, potentially reducing vigour. It is estimated that without protective measures in place, "B. brownii" would be extinct within a decade; and that extinction would be "not only a tragedy in itself but may have unforeseen, and potentially disastrous, consequences for the functioning of the vegetation communities of which feather-leaved banksia is an integral part."

The species has not yet been formally assessed for the , but warrants a "Critically Endangered (CR)" ranking because populations are projected to decline by more than 80% within the next three generations.

A five-year interim management plan was put in place by the Western Australia's Department of Environment and Conservation in October 2005. Actions under that plan include regular monitoring of populations, management of the threats of fire and "P. cinnamomi", and the cold storage of seed. There is also a translocation project underway.

The main threat to "B. brownii" is dieback caused by the introduced plant "P. cinnamomi", a soil-borne that causes root rot. Studies of the effect of "P. cinnamomi" on "B. brownii" have found it to be "highly susceptible" to dieback, with specimens "frequently and consistently killed in the wild".

No recovery plan has been put in place; instead the species is managed as part of a broader response to the region's dieback .

Other diseases to which "B. brownii" is vulnerable include the parasitic fungus ""

Because "B. brownii" releases its seed in response to bushfire, it is important that fires occur at intervals that allow the plants to generate plenty of viable seed. The optimum fire interval is around 18 years. If fire occurs too frequently, plants are burned before reaching maturity or before they have produced sufficient seed to ensure regeneration of the population. This may cause populations to decline, or even local extinction. Too-infrequent fire also causes population decline, as more plants die of natural attrition without releasing their seed, resulting in seed wastage.

Because of the difficulty of conserving "B. brownii" in its present disease-exposed locations, it is an especially suitable candidate for "ex situ" conservation measures, such as the cold-storage of seed, and the translocation of plants to disease-free locations. Seed of "B. brownii" has been collected by Western Australia's , and placed in cold-storage both in Perth and at Kew's . This includes seed collected from populations that have since become extinct. In 2008, some of this seed was germinated, and seedlings were planted at a location near Albany. Genetic analysis of the seedlings revealed some genetic diversity that was not present in any extant population. The conservation of these seeds had thus preserved some of the species' genetic diversity that would otherwise have been lost through population extinction, providing a powerful example of the importance of seed banking to conservation efforts.

With large metallic red inflorescences and attractive feathery leaves that are perhaps the softest of all "Banksia" species, "B. brownii" is highly valued by Australia's horticultural and cut flower industries. Seeds and plants are readily available in Australian nurseries, and it is widely cultivated in areas not exposed to dieback. It prefers a sheltered position in soil with good drainage, and must be provided with moisture over summer. It grows quickly, but takes several years to flower. Once established, it is frost-tolerant and tolerates light pruning not below the green foliage. The flowers are attractive in late bud, but lose their colour as soon as they open. Because they are usually surrounded by branchlets, they may be partly hidden by foliage.

The main obstacle to cultivation is the species' extreme sensitivity to dieback, which is widespread in suburban gardens. However, the species has been successfully grafted onto a of "B. integrifolia" (Coast Banksia), which renders it hardy on a range of soils.