An Enemy of the People

An Enemy of the People
This article is about the 1882 Henrik Ibsen play. For the 1989 Satyajit Ray film, see Ganashatru. 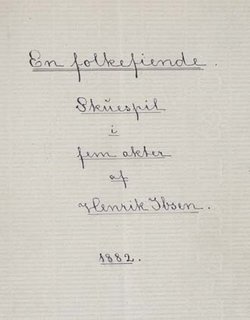 An Enemy of the People (original Norwegian title: En folkefiende) is an 1882 play by Norwegian playwright Henrik Ibsen. Ibsen wrote it in response to the public outcry against his play Ghosts, which at that time was considered scandalous. Ghosts had challenged the hypocrisy of Victorian morality and was deemed indecent for its veiled references to syphilis.

An Enemy of the People addresses the irrational tendencies of the masses, and the hypocritical and corrupt nature of the political system that they support. It is the story of one brave man's struggle to do the right thing and speak the truth in the face of extreme social intolerance. The play's protagonist, Dr Stockmann, represents the playwright's own voice. Upon completion of the play, Ibsen wrote to his publisher in Copenhagen : "I am still uncertain as to whether I should call it a comedy or a straight drama. It may [have] many traits of comedy, but it also is based on a serious idea."

Dr. Thomas Stockmann is a popular citizen of a small coastal town in Norway. The town has recently invested a large amount of public and private money towards the development of baths, a project led by Dr. Stockmann and his brother, Peter Stockmann, the Mayor. The town is expecting a surge in tourism and prosperity from the new baths, said to be of great medicinal value, and as such, the baths are a source of great local pride. However, just as the baths are proving successful, Dr. Stockmann discovers that waste products from the town's tannery are contaminating the waters, causing serious illness amongst the tourists. He expects this important discovery to be his greatest achievement, and promptly sends a detailed report to the Mayor, which includes a proposed solution which would come at a considerable cost to the town.

To his surprise, Dr. Stockmann finds it difficult to get through to the authorities. They seem unable to appreciate the seriousness of the issue and unwilling to publicly acknowledge and address the problem because it could mean financial ruin for the town. As the conflict develops, the Mayor warns his brother that he should "acquiesce in subordinating himself to the community." Dr. Stockmann refuses to accept this, and holds a town meeting at Captain Horster's house in order to persuade people that the baths must be closed.

The townspeople - eagerly anticipating the prosperity that the baths will bring - refuse to accept Dr. Stockmann's claims, and his friends and allies, who had explicitly given support for his campaign, turn against him en masse. He is taunted and denounced as a lunatic, an "Enemy of the People." In a scathing rebuttal of both the Victorian notion of community and the principles of democracy, Dr. Stockmann proclaims that in matters of right and wrong, the individual is superior to the multitude, which is easily led by self-advancing demagogues. Dr. Stockmann sums up Ibsen's denunciation of the masses, with the memorable quote "...the strongest man in the world is the man who stands most alone." He also says: "A minority may be right; a majority is always wrong."

In An Enemy of the People, speaking the language of comic exaggeration through the mouth of his spokesman, the disillusioned idealist Dr. Thomas Stockmann, Ibsen puts into very literal terms the theme of the play: It is true that ideas grow stale and platitudinous, but one may go one step further and say flatly that truths die. According to Stockmann, there are no absolute principles of either wisdom or morality. In this Ibsen is referring indirectly to the reception of his previous plays. For example, the commandment "honor thy father and thy mother" referred to in Ghosts is not simply either true or false. It may have been a truth once and a falsehood today.[1] As Stockmann puts it in his excited harangue to his political enemies: "Truths are by no means the wiry Methuselahs some people think them. A normally constituted truth lives—let us say—as a rule, seventeen or eighteen years; at the outside twenty; very seldom more. And truths so patriarchal as that are always shockingly emaciated."

This classic play was adapted by Arthur Miller in the 1950s in a production that opened at the Broadhurst Theater on December 28, 1950. It starred Academy Award winner Fredric March and his wife Florence Eldridge as well as Morris Carnovsky; future Oscar winner Rod Steiger was a "townsperson." Miller's adaptation was presented on National Educational Television in 1966, in a production starring James Daly. It was also made into a movie of the same name in 1978, starring Steve McQueen.[2] The BBC then cast Robert Urquhart as "Tom Stockman" in their 1980 TV version, adapting the story and the cast names to reflect it now being set in a Scottish town.[3]

Satyajit Ray's 1989 film Ganashatru, was also based on this play.

An Enemy of the People (with the subtitle The strongest one is the one who stands alone) - a Norwegian film issued in 2004 and directed by Erik Skjoldbjærg - is an adaptation of Ibsen's play.