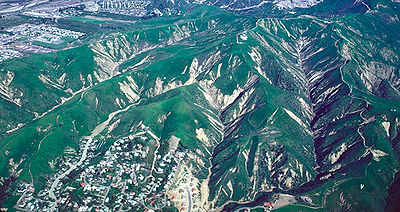 Scars formed by debris flow in great Los Angeles during the winter of 1968-1969. The photograph was taken within several months of the debris flows occurring.

A debris flow is a fast moving, liquefied landslide of unconsolidated, saturated debris that looks like flowing concrete. It is differentiated from a mudflow in terms of the viscosity and textural properties of the flow. Flows can carry material ranging in size from clay to boulders, and may contain a large amount of woody debris such as logs and tree stumps. Flows can be triggered by intense rainfall, glacial melt, or a combination of the two. Speed of debris flows can vary from 5 km/h to up to 80 km/h in extreme cases. Volumes of material delivered by single events vary from less than 100 to more than 100,000 cubic metres. Variables considered important in debris flow initiation include slope angle, available loose sediment, and degree of land disturbance by activities such as forest harvesting. Debris flows are often more frequent following forest and brush fires, as experience in southern California clearly demonstrates. Debris flows are extremely destructive to life and property, and claim thousands of lives world-wide in any given year. They are a particular problem in steep mountainous areas subjected to intense rainstorms, and have received particular attention from researchers in Japan, Western USA, Western Canada, New Zealand, the European Alps, and Kazakhstan.[1] 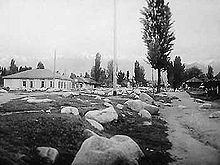 Almaty, Kazakhstan, after the catastrophic debris flow of 1921. A number of facilities, including the Medeu Dam, have been built since to prevent flows of this kind from reaching the city.[1] 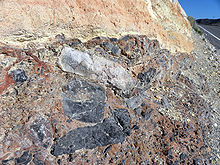 Debris flows generally form when unconsolidated material becomes saturated and unstable, either on a hillslope or in a stream channel. Flows are accelerated downhill by gravity and tend to follow steep mountain channels. The front, or 'head' of debris flow often contains a great deal of coarser material such as boulders and logs. Trailing behind this frontal lobe is the less viscous, main part of the flow that contains sand, silt and clay. Debris flows eventually become 'thinner', or less viscous, muddy flood waters as they deposit their coarser components in areas of reduced gradient. Debris flows tend to move in pulses, or discrete surges, as friction or other barriers are overcome during the flow. Sometimes earlier pulses or previous debris flow deposits form levees which confine the flow until they are breached by later, larger flows. The presence of older levees (a.k.a. lateral deposits) provides some idea of the magnitudes of previous debris flows in a particular area, and through dating of trees growing on such deposits, may indicate the approximate frequency of destructive debris flows. This is important information for land development in areas where debris flows deposit material, known as debris fans and alluvial fans. The big debris flow or landslide is called yamatsunami (山津波), literally mountain tsunami in Japan.

A lahar is a debris flow related in some way to volcanic activity, either directly as a result of an eruption, or indirectly by the collapse of loose material from the flanks of a recently active volcano. A variety of factors may trigger a lahar, including melting of glacial ice due to volcanic activity or pyroclastic flow, intense rainfall on loose pyroclastic material, or the out bursting of a lake that was previously dammed by pyroclastic or glacial material. The word lahar is of Indonesian origin, but is now routinely used by geologists world-wide to describe volcanogenic debris flows.

A jökulhlaup is a debris flow that originates from a glacial outburst flood. Jökulhlaup is an Icelandic word which refers specifically to floods having a glacial trigger. In the case of Iceland, many such floods are triggered by sub-glacial volcanic eruptions, since Iceland sits atop the Mid-Atlantic Ridge. Elsewhere, a more common cause of jökulhlaups is the breaching of ice-dammed or moraine-dammed lakes. Such breaching events are often caused by the sudden calving of glacier ice into a lake, which then causes a displacement wave to breach a moraine or ice dam. Downvalley of the breach point, a jökulhlaup may increase greatly in size through entrainment of loose sediment and water from the valley through which it travels. Travel distances may exceed 100 km.

Theories and models of debris flows