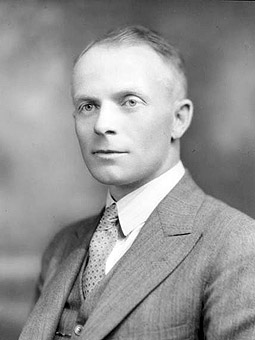 Adélard Godbout was born in Saint-Éloi. He was the son of Eugène Godbout, and Liberal (MLA) from 1921 to 1923, and Marie-Louise Duret. He studied at the Séminaire de , the agricultural school of Sainte-Anne-de-la-Pocatière and the Amherst Agricultural College, in the American state of . He then became teacher at the Sainte-Anne-de-la-Pocatière agricultural school from 1918 to 1930. He was an agronomist for the Ministry of Agriculture from 1922 to 1925.

Member of the Legislature

Godbout became a Member of the legislature for the district of L'Islet in the area, after he won a without opposition on , . He was re-elected in the 1931 and 1935 elections.

Member of the Cabinet

Godbout was appointed to the Cabinet by Premier Alexandre Taschereau and served as Minister of from , to , .

Shortly after the 1935 election, Conservative Leader , a rising star in Quebec politics, forced Taschereau to call the Standing Committee on Public Accounts, which brought to light the existence of widespread corruption in the provincial government. The revelations made by the committee were embarrassing for several Liberal insiders. On June 11, 1936, less than a year after being put back in office, Taschereau resigned. He recommended to Lieutenant Governor the names of Édouard Lacroix and Adélard Godbout for his successor as Premier. Following constitutional conventions, the lieutenant governor offered the opportunity to form a government to Lacroix, who declined. He then made the offer to Godbout, who accepted. With the blessing of federal Cabinet Members, he took over Taschereau’s job as Liberal Leader and Premier of Quebec. Godbout formed his first government and an election was called for August, 1936.

Godbout had remained untouched by the scandals. But despite Godbout's talks of "a new order" in an effort to distance himself from the Taschereau era, his first government lasted only two months, as his party suffered a humiliating defeat in the 1936 election. Led by Duplessis, the recently created Union nationale was put in office. The Liberals were reduced to 14 seats. Godbout lost re-election in his own district of L'Islet. He remained Liberal Leader, but T.-D. Bouchard led the parliamentary wing of the party until the 1939 election.

created the opportunity that Godbout needed to make a political comeback. An early provincial general election was called in 1939 and federal Cabinet member , the of Prime Minister Mackenzie King, took the stump for Godbout. He guaranteed that no one would face conscription if voters supported the Liberals. Lapointe would die of cancer in 1941.

Through the campaign, Godbout relentlessly repeated the formal promise : "The government will never declare military conscription. I undertake, on my honor, weighing each of my words, to leave my party and even to fight against it, if even one French Canadian, before the end of the hostilities in Europe, is mobilized against his will under a Liberal government." ["Le Soleil", October 6, 1939.] Their promise would soon haunt Liberal politicians.

In the meantime though, Godbout made a spectacular comeback. He and 69 of his candidates were sent to the legislature. Godbout formed his second government, where he would serve as Premier and as minister of Agriculture.

Under Godbout’s premiership, the provincial government implemented a number of significant progressive legislations, laying the groundwork for the that would be implemented by the government of Premier a couple of decades later. In fact, the Liberal administration delivered many of the proposals made by ’s in 1935.

These measures include:
#the enactment of the right to vote for women in 1940, despite resistance from Duplessis and the ;
#the establishment of a in 1943;
#the passage of an act that enforced compulsory school attendance until the age of 14 and the introduction of in primary schools in 1943;
#the adoption of a Labour Code that established principles governing union certification and the negotiation of collective agreements in 1944;
#the nationalization of the , a private corporation who had a monopoly on gas and electric light in the area, which lead to the creation of in 1944. [ [http://faculty.marianopolis.edu/c.belanger/quebechistory/bios/godbout.htm Biographies of Prominent Quebec Historical Figures - Adélard Godbout, Marianopolis College, 2005] ]

Relations with the federal government

Because he served during wartime and dealt with federal politicians who believed in a strong federal government, Godbout was pressured into abandoning a number of the provincial jurisdictions. The most notable prerogatives that he surrendered to Ottawa include:
#the opportunity to create and oversight a provincial system (a nation-wide program was put into action in 1940);
#the power to tax the income of individuals and corporations, in exchange for a much more modest financial compensation from the federal government.

In a 1942 plebiscite, Canadian voters were asked to release the Government from its commitment made to the Quebec voters not to declare military conscription. Even though the majority of predominantly French-speaking Quebec refused, English-speakers throughout Canada accepted. Even though not that many people were forced to serve until the end of the war, the decision made by Mackenzie King to allow conscription was very unpopular in Quebec. Opposition Leader Maurice Duplessis, whose criticism of the federal encroachments to the constitutional autonomy of the provinces capitalized on the population’s mistrust of the federal government, had a field day.

In the 1944 provincial election, Godbout's Liberals and Duplessis’ Union Nationale received similar shares of the popular vote, the Liberals getting slightly more votes but the UN enjoying a level of support in the province’s rural areas that was strong enough to win a majority of seats to the legislature and thus form the government.

Godbout served as Leader of the Opposition until the 1948 election. Benefiting from post-war prosperity, the Union Nationale won an overwhelming majority. The Liberals won only eight seats, six of whom were located on the Montreal Island. Once again, Godbout narrowly lost re-election in his home district of L'Islet. In 1950, he relinquished the leadership of the Liberal Party.

In 1949, Godbout was appointed to the on the recommendation of Canadian Prime Minister . He remained a senator until his death in 1956.

More nuanced analysis claim that, being in power during World War II, he served in a difficult time, despite the shortcomings of his relations with the federal government.

In his 2000 film entitled "", filmmaker , Adélard's nephew, lamented what he perceived as a lack of public knowledge about his uncles's work and premiership.

On September 27, 2007, in a ceremony attended by Premier Jean Charest, a former electrical power station in Montreal, at the corner of Wellington and Queen streets, known as Poste Central-1 was named in honour of Godbout. A bust of Godbout by sculptor Emile Brunet (1893-1977) has been installed at the site.