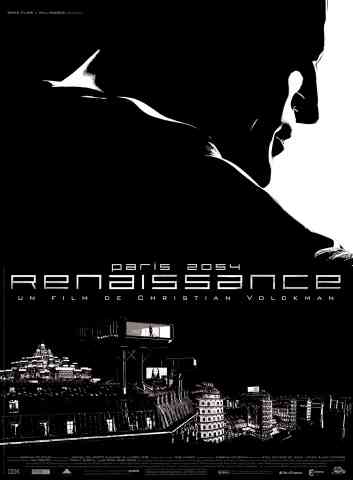 "Renaissance" is an animated / detective by French director . It was co-produced in , and and released on 2006 in France and 2006 in the UK by . Renaissance features a rare visual style in which almost all images are exclusively black and white, with only occasional colour used for detail.

The film cost 14 million € to make over six years. It was funded by Disney with 3 million USD provided from Miramax.

with 40 actors and were used to create the film's distinctive black and white animated visual style. The actors wore black suits with markers dotted along the surface which recorded movement from their limbs, faces and eyes. All acting was performed against a bluescreen in a . Once a scene was recorded, computer software was used to build 3D animated models around the motion captured data. The bluescreen was used to create a virtual setting around the models. The black and white effect was added later using lighting.

In Paris in the year 2054, where every deed and gesture is checked and filmed, Ilona Tasuiev, a young scientist envied by all for her beauty and intelligence, is kidnapped. Avalon, the megalithic corporation that Ilona works for, puts pressure on Karas, a controversial policeman specialising in abductions, to find her as quickly as possible. But Karas soon feels a little presence in his wake.

He isn't alone in the quest for Ilona, and his pursuers seem poised to overtake him. Finding Ilona becomes vital: the brilliant young woman is involved in a conspiracy which is bigger than any imaginable. She holds the key to a secret that puts humanity's future in question: The Renaissance Protocol...

The producers used a relatively new form of animation, , to create the film's unique look. Filmed entirely against a bluescreen, Renaissance's cast completed entire scenes wearing skin-tight black suits covered in motion sensors that were used to record movements, face direction and even where their eyes were looking.

Computer animators then placed the captured actions into pre-constructed 2D backdrops before adding the characters looks and the film's noir-styled visuals.

In a similar way to with its RSQ for "I, Robot", French automaker designed a car specially for the film, imagining what a Citroën might look like in 2054. [ [http://www.citroen.com/CWW/en-US/NEWS/NEWSRELEASES/ArchivesNewsReleases/200606/07032006_CINEMA.htm France: Citroën creates a car for 2054] ]

The film received mixed reviews from critics. The review aggregator reported that 43% of critics gave the film positive reviews, based on 65 reviews. [cite web|url=http://www.rottentomatoes.com/m/renaissance/ |title=Renaissance Movie Reviews, Pictures - Rotten Tomatoes |accessdate=2008-03-29 |publisher=] reported the film had an average score of 57 out of 100, based on 17 reviews. [cite web|url=http://www.metacritic.com/film/titles/renaissance |title=Renaissance (2006): Reviews |accessdate=2008-03-29 |publisher=]