StB
This article is about the Czechoslovakian state security service. For the shoot 'em up video game, see Shoot the Bullet. For the official licence for tax advisors in Germany, see Steuerberater.

In former Czechoslovakia, State Security (Czech: Státní bezpečnost, Slovak: Štátna bezpečnosť) or StB / ŠtB, was a plainclothes secret (political) police force from 1945 to its dissolution in 1990. Serving as an intelligence and counter-intelligence agency, it dealt with any activity that could possibly be considered anti-communist. 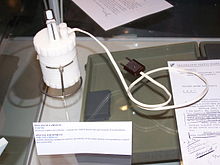 From its establishment on June 30, 1945, onward, the StB was bound to and controlled by the Communist Party of Czechoslovakia. The communists used the StB as an instrument of power and repression: the StB spied on and intimidated political opponents of the Party and forged false criminal evidence against them, facilitating the Communists rise to power in 1948. Even then, before Czechoslovakia became a communist state, the StB used forcing confessions by means of torture, including the use of drugs, blackmail and kidnapping. After the coup d'état of 1948, these practices developed under the tutelage of Soviet advisors[citation needed]. Other common practices included telephone tapping, permanent watching of apartments, reading mail, house searches, surveillance, arrests and indictment for so-called "subversion of the republic".[1]

The StB's part in the fall of the regime in 1989 is still uncertain. The reported murder of a student by police in action against a peaceful demonstration in November 1989 was the catalyst for wider public support and further demonstrations, leading to the overthrow of the communist regime. The StB were alleged to have used an StB agent, Ludvík Zifčák, as the dead student Martin Šmíd. This was based mainly on Zifčák's testimony. However, in 1992, the Czechoslovak parliamentary commission for investigation of events of November 17, 1989 has ruled out this version, stating that "the role of former StB lieutenant L. Zifčák was only marginal, without any connection to critical events and without any active effort to influence these events. Investigation of related circumstances has indisputably proved that L. Zifčák's testimony that attributes a key role in November's events to himself is based on facts, which are either technically impossible and infeasible, or contradict actions of persons mentioned by him, which aimed to completely different goals."[2]

State Security was dissolved on February 1, 1990. The current intelligence agency of the Czech Republic is the Security Information Service, although it is not a successor to StB. The former associates of the StB are currently banned from taking certain jobs, such as legislators or policemen.

The Act on Lawlessness of the Communist Regime and on Resistance Against It states that StB, as an organisation based on the ideology of the Communist Party, was "aimed to suppress human rights and democracy through its activities" and thus based on a criminal ideology.[3]

Organization within the Czechoslovak government

The State Security was a part of the National Security Corps (Czech: Sbor národní bezpečnosti, SNB; Slovak: Zbor národnej bezpečnosti, ZNB) along with Public Security (Czech: Veřejná bezpečnost, VB; Slovak: Verejná bezpečnosť, VB) – a uniformed force that performed standard police duties. Both forces worked at regional and district levels, supervised by the Ministries of the Interior of the Czech and Slovak Socialist Republics, but operationally directed by the federal Ministry of Interior.