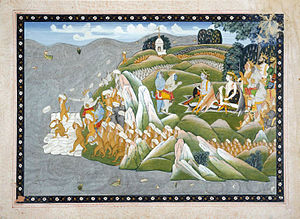 A 19th century painting depicting a scene from the Ramayana, wherein Vanaras and bears are shown building Rama Setu, a bridge to Lanka.

Vānara (Sanskrit: वानर) popularly refers to a group of ape-like humanoids in the Hindu epic Ramayana who were brave and inquisitive by nature. They possessed supernatural powers and could change their shapes.[1] The term Vanara can be described as forest-dweller (vane carati iti vanara).

The epic Mahabharata describes them as forest-dwelling, and mentions their being encountered by Sahadeva, a Pandava general who led a military campaign to south India.

A scene in Ramayan

Vanaras are created by Brahma and other gods to help Rama in battle against Ravana. They are powerful and have many godly traits. Taking Brahma's orders, the gods began to parent sons in the semblance of monkeys (Ramayana 1.17.8). The Vanaras took birth in bears and monkeys attaining the shape and valor of the gods and goddesses who created them (Ramayana 1.17.17-18).[2] After Vanaras were created they began to organize into armies and spread across the forests, although some, including Vali, Sugriva, and Hanuman, stayed near mount Riskshavat.

According to the Ramayana, the Vanaras lived primarily in the region of Kishkindha in present-day Karnataka, in the midst of Dandaka Forest, where Lord Rama met them during his search for Sita.[3] An army of millions of Vanaras helped Rama in his search for Sita, and also in battle against Ravana, Sita's abductor. The built a bridge over the ocean so that Rama and the army could cross to Lanka. As described in the epic, the characteristics of the Vanara include being amusing, childish, mildly irritating, badgering, hyperactive, adventurous, bluntly honest, loyal, courageous, and kind.[4]

In the Ramayana Hanuman changes shape several times. For example, while he searches for the kidnapped Sita in Ravana's palaces on Lanka, he contracts himself to the size of a cat, so that he will not be detected by the enemy. Later on, he takes on the size of a mountain, blazing with radiance, to show his true power to Sita.[5] 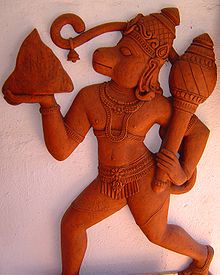 Sculpture of Hanuman, a king among the Vanara, carrying the Dronagiri mountain.