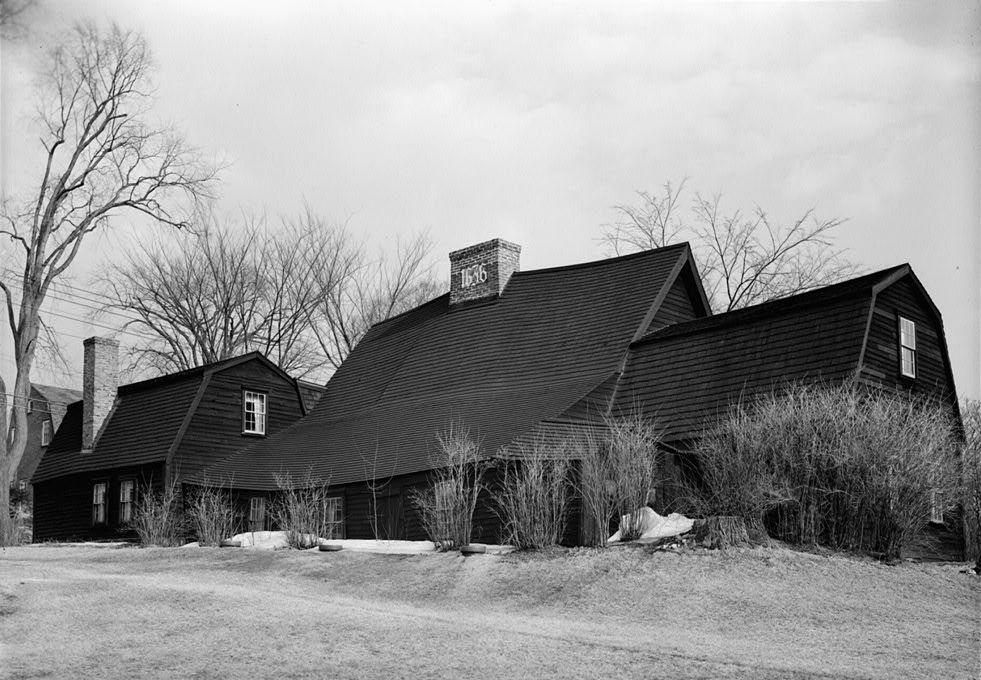 The Fairbanks House is an historic home in . Built by Jonathan Fairebanke for his wife Grace (Lee Smith) and their family in about , it is the oldest surviving timber-frame house in North America. The house was occupied and then passed down through eight generations of the family until the early twentieth century. Over the years the original portion was expanded with additions as the needs of the family grew and as fashions of the times dictated.

Today the Fairbanks house is owned and operated by the Fairbanks Family in America, a member-based non-profit organization. The Family Association has preserved, studied and interpreted their ancestral home and its collections for over 90 years.

The house was built in several stages; the center portion of the present house is oldest, with a -roofed portion at the center. It was once a lobby-entry, hall-parlor house of two stories with a center chimney bay. The lean-to was added later, contrary to the note on the first floor plan (see image). The oak lintel over its parlor fireplace has been dated by to 1637. Since timber was not seasoned before use in the 17th century, this provides a plausible date for the house's initial construction. Other houses claiming to be older have yet to be scientifically dated.

Exterior walls were covered with wide oak clapboards at the front, narrower oak on the west gable end, and narrow cedar on the rear. Its front door was originally located to the west side of the chimney-bay, while the rear door is still located at the west end of the north wall. Original front windows included wide banks on each floor and small windows lighting the chimney bay. A well-preserved four-light window survives in the east gable end, but the north and east ends of the house apparently had no windows.

A lean-to was later added at the back of the house and, perhaps in 1641, a wing on the east side. The west wing was added around 1654. The east wing was probably added circa late 1700s, assembled from two earlier buildings elsewhere. A chimney was then built for it; later its roof rafters were raised and reused in a new gambrel roof. The next major change was the expansion of the parlor to the east, under a hip roof, and the addition of the small entry to this expanded space, probably around 1800. A new wing was added to the west side of the house, including two rooms. The last addition to the house, completed by 1881, was a privy added behind the west wing.

Jonathan Fairebanke (Fairbank, Fairbanks) came from in the West Riding of , to , in the year 1633, and in 1636 settled in Dedham, Massachusetts, where he built the noted "Old Fairbanks House" which is still standing as an ancient landmark, the oldest dwelling house in New England that, for the same period of time, has been continuously owned and occupied by the builder and his lineal descendants. Only a few houses, or parts of houses of the same age remain, and most of these are in ruins. It is, moreover, a remarkable fact, perhaps unparalleled in this country, that during all this time, two and a half centuries, the estate has never had a incumbrance upon it. This house is now historically famous, and is an object of great interest to many visitors to the old town of Dedham.

It has been claimed that this house was built in 1636. This claim has been the subject of considerable discussion among historians, and is disputed on historical grounds. One, at least, expresses the belief that it was not built until about the year 1640. The chief reason assigned for his belief is that the old house is a framed building of massive oak timber, and that there is no historical evidence that any framed dwelling houses were erected in the town as early as 1636. Against this alleged fact is the tradition that the frame of the main part of the house, together with the bricks and tiles and windows, was imported from England, and remained in Boston for several months before it was carried to Dedham.

The truth is that the house was not built as it stands at one time, or in one year; and it is certain that Jonathan owned a house situated probably on the same lot in 1648. Subsequently, perhaps as late as 1654, a large addition was made to the original building, which was called the new house, which is said to have been built for the occupation of his son John after his marriage.

"It may be said quite simply that no other house of the mid-17th century in New England has survived in such unbelievably unspoiled condition. It is also extraordinary that so early a structure should preserve such a high percentage of original features. It is a veritable storehouse of information concerning the small handful of houses which survive from this early period.":~Abbot Lowell Cummings, , American Art,