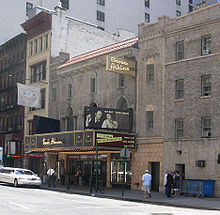 Brooks Atkinson Theatre showing A Moon for the Misbegotten, 2007

The Brooks Atkinson Theatre is a Broadway theater located at 256 West 47th Street in Manhattan.

Designed by architect Herbert J. Krapp, it was constructed as the Mansfield Theatre by the Chanin brothers in 1926. After 1933, the theatre fell into relative disuse until 1945, when Michael Myerberg bought it and leased it to CBS for television productions. Known as CBS Studio 59, the theater played host to the long-running game show What's My Line?.[1] In 1960, it was renamed after the former New York Times theater critic, Brooks Atkinson, and returned to legitimate use.

In 2000, the interior was refurbished with restored decorative finishes by EverGreene Architectural Arts, and now the theatre is once again illuminated by the original chandelier that had been removed over 40 years ago. It has 1,069 seats and is one of the Nederlander Organization's nine Broadway houses.

The revival of Grease recently played at the Brooks Atkinson Theatre. The show featured Max Crumm as Danny Zuko and Laura Osnes as Sandy Dumbrowski. who were the winners of the 2006-2007 reality TV show Grease: You're the One that I Want which selected a new Danny and Sandy for the revival through a massive nationwide casting call.

RAIN - A Tribute to The Beatles is currently playing at the Brooks Atkinson Theatre, replacing Rock of Ages, which moved to the Helen Hayes Theatre.