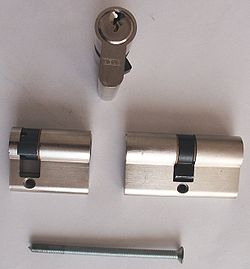 A cylinder lock is a lock constructed with a cylinder that a locksmith can easily unscrew to facilitate rekeying.[1] The cylinder may contain any of a variety of locking mechanisms, including the pin tumbler lock, the wafer tumbler lock and the disc tumbler lock.

The first main advantage to a cylinder lock, also known as a profile cylinder lock, is that the cylinder may be changed without altering the boltwork hardware. Removing the cylinder typically requires only loosening a set screw, then unscrewing the cylinder from the boltwork. The second is that it is usually possible to obtain, from various lock manufacturers, cylinders in different formats that can all be used with the same type of key. This allows the user to have keyed-alike, and master-keyed systems that incorporate a wide variety of different types of lock, such as nightlatches, deadbolts and roller door locks. Typically, padlocks can also be included, although these rarely have removable cylinders.

Standardised types of cylinder include key-in-knobset cylinders, rim (also known as nightlatch) cylinders, Ingersoll format cylinders, American, and Scandinavian round mortise cylinders, and Scandinavian oval cylinders. There are also standardised cross-sectional profiles for lock cylinders that may vary in length - for example to suit different door thicknesses. These profiles include the europrofile (or DIN standard), the British oval profile and the Swiss profile.

Cruciform pin-tumbler locks may also use interchangeable cylinders, as do a few sophisticated lever locks.

Keyed alike (KA)
This system allows for a number of cylinders to be operated by the same key. It is ideally suited to residential and commercial applications such as front and back doors.

Master keyed (MK)
A master-keyed system involves each lock having its own individual key which will not operate any other lock in the system, but where all locks can be operated by a single master-key. This is usually applied in commercial environments.

Grand master keyed (GMK)
This is an extension of the master-keyed system where each lock has its own individual key and the locks are divided into 2 or more groups. Each lock group is operated by a master-key and the entire system is operated by one grand master-key. This is ideally utilized in complex commercial systems.

Common entrance suite / Maison keying (CES)
This system is widely used in apartments, office blocks and hotels. Each apartment (for example) has its own individual key which will not open the doors to any other apartments, but will open common entrance doors and communal service areas. It is often combined with a Master Keyed system in which said key is kept by the landlord.