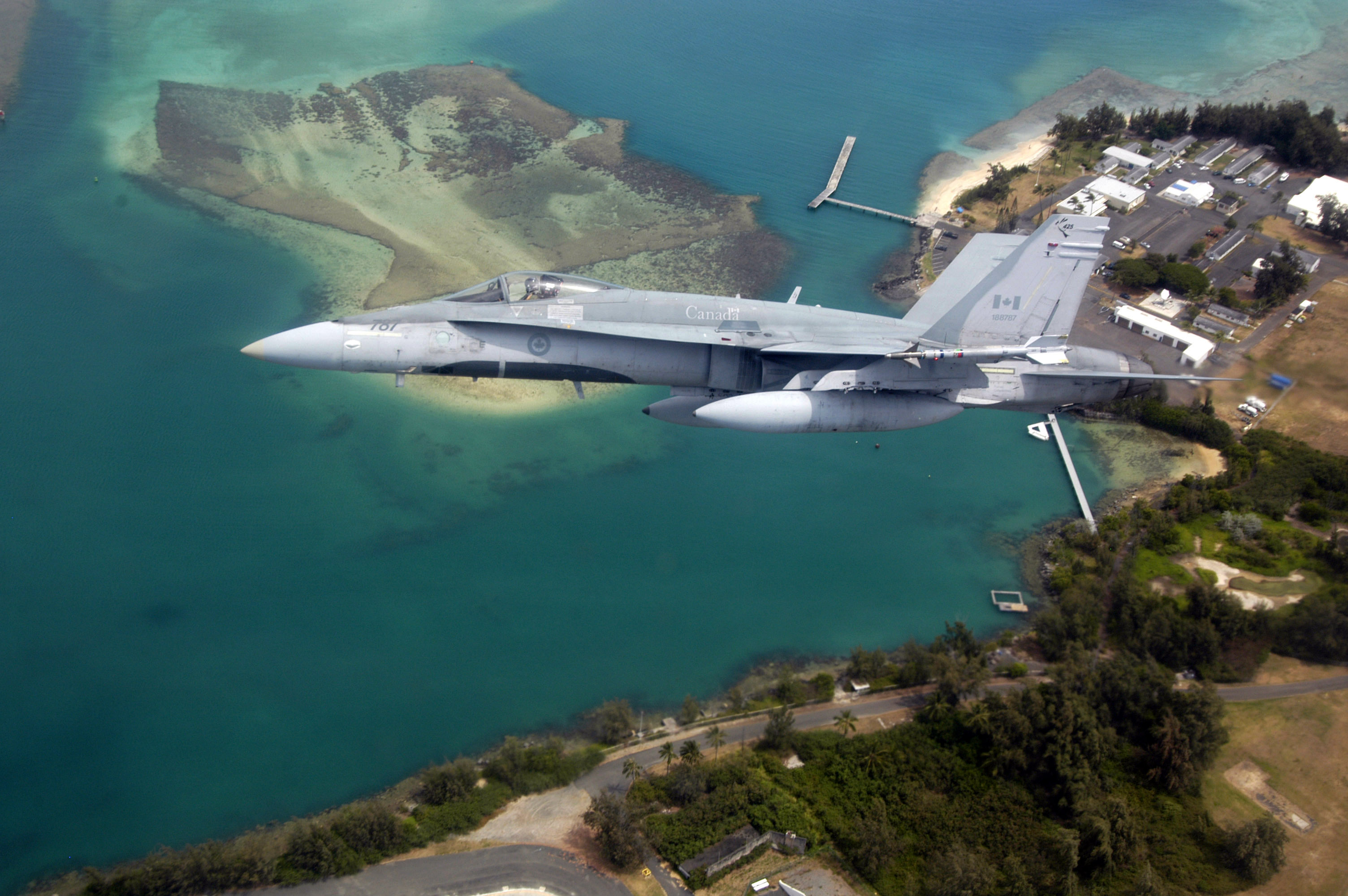 In 1977, the Canadian government identified the need to replace the NATO assigned CF-104 Starfighter, the NORAD assigned and the CF-116 Freedom Fighter, although the decision was later made to keep the CF-116. The subsequent decision was to proceed with the "New Fighter Aircraft" competition (NFA), with a purchase budget of around 2.4 billion CAD to purchase 130-150 of the winner of the competition. Candidates included the , , , Dassault (later replaced by the ), plus the products of the American (LWF) competition, the , F/A-18 Hornet, and a de-navalized version of the Hornet, the F-18L. The government stressed that the winner of the competition be a proven off-the-shelf design and provide substantial industrial benefits as part of the order.

By 1978, the "New Fighter Aircraft" competitors were short listed to just two aircraft; the F-16 Falcon and the two F-18 offerings. The F-14, F-15, and the Tornado were rejected due to the high purchase price, while Dassault dropped out of the competition. The F-18L combined the systems and twin-engine layout of the F-18 that Air Command favored with a lighter land-based equipment setup that significantly improved performance. However, Northrop, the primary contractor for the F-18L version, had not built the aircraft by the time of the NFA program, waiting on successful deals before doing so. Additionally, while Northrop offered the best industrial offset package, it would only "pay off" if other F-18L orders were forthcoming, something the Department of National Defense (DND) was not willing to bet on.

However, the F-14 almost entered Canadian service through the backdoor due to the . In the aftermath of the revolution, the US cut off all military supplies to Iran, which meant that their new fleet of F-14s would be potentially rendered unflyable due to a lack of spares. The Canadians offered to purchase them at a steeply discounted price. However, the negotiations died before a deal was reached as it was revealed that Canadian involvement was instrumental for the smuggling of American embassy personnel out of the new Islamic Republic. [ [http://www.sfu.ca/casr/id-cf18-1-3.htm The CF18 Hornet fighter aircraft – In Detail (Part 3)] ]

In 1980, the was declared the winner of the New Fighter Aircraft competition. The order included 98 single-seat variants and 40 dual-seat variants, for a total of 138 purchased, plus 20 options (which were not exercised). The F/A-18 Hornet was then dubbed the CF-188 (the name Hornet not being used as the translation in French is "Frelon," which is already used by a French military helicopter). However, in every context except the most official of military documents, the planes are referred to as CF-18 Hornets. Reasons for the selection listed by the Canadian Forces were many of the features that was requested to be included for the US Navy; two engines for reliability (considered essential for conducting Arctic sovereignty and over the water patrols), an excellent radar set, while being considerably more affordable than the F-14 and the F-15.

The most visible difference between a CF-18 and a US F-18 is the 600,000 night identification light. This spotlight is mounted in the gun loading door on the port side of the aircraft. Some CF-18s have the light temporarily removed, but the window is always in place. Also, the underside of the CF-18 features a painted "dummy canopy". This is intended to disorient and confuse an enemy in air-to-air combat.

Many features that made the F/A-18 suitable for naval carrier operations were also retained by the Canadian Forces, such as the robust landing gear, the arrestor hook, and wing-folding mechanisms, which proved useful when operating the fighters from smaller airfields such as those found in the Arctic.

The first two CF-18 were formally handed over to 410 (Operational Training Unit) Squadron at , Alberta on , .

In 1991, Canada committed 26 CF-18s to the on Operation Friction. (The US portion of the Gulf War was called /.) The CF-18s were based in , . During the Gulf War, Canadian pilots flew 5,700+ hours, including 2,700 combat air patrol missions. These aircraft were taken from Canada's airbase in Germany, (now a civilian airport). In the beginning the CF-18s began sweep and escort combat missions to support ground-attack strikes by Allied air forces. However, during the 100-hour Allied ground invasion in late February, CF-18s also flew 56 bombing sorties, mainly dropping 500 lb (230 kg) conventional ("dumb") bombs on Iraqi artillery positions, supply dumps, and marshaling areas behind the lines. At the time the Canadian Hornets were unable to deploy precision guided munitions (PGMs).

In June 1999, with 18 CF-18s already deployed to , , Canada participated in both the air-to-ground and air-to-air roles. Canadian aircraft conducted ten percent of the NATO strike sorties despite deploying a much smaller percentage of the overall forces. Canadian pilots flew 678 combat sorties—120 defensive counter-air escorts for Allied strike packages and 558 bombing strikes during 2,577 combat flying hours. CF-18s dropped a total of 397 PGMs and 171 free-fall iron bombs on a wide variety of targets including surface-to-air missile sites, airfields, bridges and fuel storage areas.

The Future of the Fleet

In 2000, the need to upgrade the CF-18 became necessary as demonstrated during and during the 1998 as advances in technology had rendered some of the avionics on board the CF-18 obsolete and out of step when operating with NATO allies. As a response, the military initiated in 2001 a major modernization program for the CF-18 dubbed the CF-18 "Incremental Modernization Project" (IMP). The project was broken into two phases over a period of seven years and is meant to improve air-to-air and air-to-ground combat capabilities, upgrade sensors and the defensive suite, and replace the datalinks and communications systems on board the CF-18 from the old F/A-18A and F/A-18B standard to the current F/A-18C and D standard. The project is supposed to extend the life of the CF-18 until 2017–2020, at which point, the (JSF) is expected to replace the CF-18. (merged with McDonnell Douglas) the primary contractor and the primary subcontractor, was then issued a contract for the modernization project starting in 2002. 80 CF-18s, consisting of 62 single-seat and 18 dual-seat models were selected from the fleet for the upgrade progamme.

Phase I of the CF-18 Incremental Modernization Project consisted of:
* Replacing the old Hughes radar with the new Hughes (now ) radar, which has triple the processing speed and memory capacity of the old AN/APG-65 radar, while also incorporating Terrain Following and Terrain Avoidance modes for low level ground attack missions. Furthermore, the new AN/APG-73 radar was also capable of guiding the modern medium range missiles that were to be purchased.
* Addition of the AN/APX-111 Combined interrogator and transponder, otherwise known as an IFF (Identification Friend or Foe). The new IFF brings the CF-18 up to current NATO standards for combat identification and will allow the AIM-120 AMRAAM missiles to be used out to their maximum range while reducing the risk of ‘friendly-fire’ incidents.
* Replacement of the old radios with the new AN/ARC-210 RT-1556/ARC VHF/UHF Radio. This radio, capable of line-of-sight communications on / frequencies as well as , HAVE QUICK II, and waveforms resolved the issues of compatibility with allied forces that became apparent during the 1991 Gulf War and the Kosovo Conflict, and are furthermore, more resistant to jamming while providing enhanced data link capabilities that previously required the need of multiple radios to accomplish.
* Replacement of the old mission computer with the Advanced Information Systems AN/AYK-14 XN-8 mission computer, which offered increased memory and processing capabilities over the old mission computer.
* Replacement of the old Stores Management System with the AN/AYQ-9 Stores Management System. This upgrade is considered an important element of the upgrade as it makes the CF-18 more compatible with the latest of precision guided munitions and furthermore adds the interface which is required for firing the missile.
* Furthermore, a Global Positioning System/Inertial Navigation System (GPS/INS) capability was installed on the CF-18 which enhances navigational capabilities of the CF-18.

Within the same time frame, other upgrades not in the scope of the IMP were also conducted:
* A new infrared sensor was installed on the aircraft.
* The old cathode ray tube cockpit instrument panels were replaced with new flat paneled, full colour LCD displays from Litton Systems Canada (now Canada). [ [http://www.boeing.com/defense-space/military/fa18/news/2002/q3/nr_020726m.html Boeing Awarded Contract with Canada to Update Displays on F/A-18s] ]
* A new night vision imaging system was added to the aircraft.
* Purchase of the medium range missiles and other advanced air to air and air to ground munitions.
* A landing-gear “get well” program to reduce corrosion and improve gear retraction.
* An Advanced Distributed Combat Training System.

The first completed "Phase I" CF-18 was delivered to the Canadian Forces on time in May 2003. [ [http://www.boeing.com/defense-space/military/fa18/news/2003/q2/nr_030514n.html Boeing Delivers First CF-18 Aircraft from Modernization Project] ] Final delivery of all "Phase I" CF-18s was done at a ceremony on at L-3 Communications in Mirabel, Quebec. [ [http://www.boeing.com/defense-space/military/fa18/news/2006/q3/060831a_nr.html Boeing Completes First Phase of CF-18 Aircraft Modernization Project] ]

Phase II of the CF-18 Incremental Modernization Project was award to Boeing on , which consists of the following upgrades:
* The addition of a data net system to the aircraft, enhancing interoperability with major NATO allies.
* The integration of the Joint Helmet Mounted Cueing System from and Israel’s .*
* A crash survivable flight data recorder.
* An upgraded electronic warfare suite.

Within the same time frame, other upgrades not in the scope of the IMP are also planned:
* A fuselage Centre Barrel Replacement Project (for 40 of the upgraded aircraft).
* An Air Combat Manoeuvring Instrumentation System.
* An Integrated Electronic Warfare Support Station.
* An Electronic Warfare Test Equipment Project.

Planned allocation is two operational squadrons of 24 aircraft each, with the remaining 33 available for training, testing and evaluation AETE, and depot level maintenance.

*Operational readiness: Of the 48 aircraft in operational squadrons, 34 (70%) are normally mission-ready on a daily basis.

*Operational lifetime: The Canadian Forces expect the Hornet to maintain front-line status until 2017 to 2020, and also expect losses at an average rate of one aircraft every two years.

*4 Wing , :409 Nighthawks Tactical Fighter Squadron :410 Cougars Tactical Fighter (Operational Training) Squadron :AETE (Aerospace Engineering Test Establishment)
*Rotations from Cold Lake occur from 4 Wing to , and from 3 Wing Bagotville to and , , , , and various forward operating bases in the Canadian Arctic. There are normally a few aircraft at as well, though not a permanent squadron.