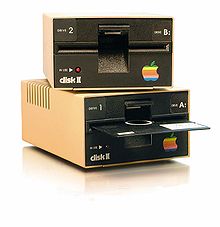 The Disk II Floppy Disk Subsystem was a 5¼-inch floppy disk drive designed by Steve Wozniak and manufactured by Apple Computer. It was first introduced in 1978 at a retail price of US$495 for pre-order; it was later sold for $595 including the controller card and cable. The Disk II was designed specifically for use with the Apple II personal computer family to replace the slower cassette tape storage and cannot be used with any Macintosh computer without an Apple IIe Card.

Apple did not originally offer a disk drive for the Apple II, which used data cassette storage like other micromputers. Mike Markkula asked fellow cofounder Steve Wozniak to design a drive system for the computer after finding that a checkbook-balancing program Markkula had written took too long to load from tape.[1] The first Disk II drives (A2M0003) sold were built using parts from Shugart Drives, but to reduce costs Apple switched to Alps Electric Co. of Japan who built them for half the cost. Early production at Apple was handled by two people, and they produced about thirty drives a day. [2][3]

Normal storage capacity per disk side was 113.75kiB with DOS 3.2.1 and earlier (13 256-byte sectors per track, 35 tracks per side), or 140kiB with DOS 3.3 and the accompanying ROM update for the controller card (16 sectors per track). The drive mechanism only contained one read/write head on the bottom, making it single sided, however it was common for users to manually flip the disk to utilize the opposite side (after cutting a second notch on the diskette's protective shell to allow write-access). Only one side could be accessed at once, but it did essentially double the capacity of each floppy diskette. The full-height drive shipped inside a beige painted metal case and connected via a 20-pin ribbon cable (DB-19 adapters were eventually available for use with Apple's later connector standard). Up to 14 drives could be attached to the Apple, using 7 interface cards (2 per card). A Bell & Howell version of the Disk II was also manufactured by Apple in a black painted case which matched the color of the Bell & Howell version of the Apple II Plus which Apple was already manufacturing.

In 1978, Apple intended to develop its own FileWare drive mechanism for use in the new Apple /// and Lisa business computers being developed. They quickly ran into difficulties which precluded them from being incorporated in the Apple ///, which continued to use the earlier Shugart design.[4]

The first variation of the Disk II introduced for the Apple ///, called the Disk /// (A3M0004), used the identical drive mechanism inside a modified plastic case with a proprietary connector. With some modification both drives are interchangeable. Though Apple sought to force the purchase of new drives with the Apple ///, many former Apple II users quickly devised a way to adapt their existing and cheaper Disk II drives, however only one external Disk II was supported in this manner. The Disk /// was the first to allow daisy chaining of up to three additional drives to the single 26 pin ribbon cable connector on the Apple ///, for a total of 4 floppy disk drives – the Apple /// was the first Apple to contain a built-in drive mechanism. The Apple III Plus changed its 26-pin connector to a DB-25 connector, which required an adapter for use with the Disk III.

In 1983 Apple announced the 860ki FileWare drives (UniFile and DuoFile) as a replacement for the Disk II & III, but due to the notorious unreliability of the Apple-built so-called "Twiggy" drives first used in the Lisa, the products never shipped.[5][6]

In 1985, Apple attempted to introduce a new 3.5" 800ki floppy disk format to eventually replace the Disk II format. However, the external UniDisk 3.5 drive required a ROM upgrade or a new disk controller card to be used. Many original Apple IIs could not use the new controller without further upgrades as well and therefore the 3.5" format was not widely accepted. Though Apple eventually offered a 1.44MiB Superdrive as well, the 5.25" Disk II format continued to be offered in preference alongside the newer 3.5" drives until the platform was discontinued in 1993.

In 1983, along with the introduction of the Apple IIe, Apple initially offered a combination of two, two third-height, 143K Disk II drive mechanisms side-by-side in a single plastic case, called the DuoDisk 5.25 (A9M0108), which could not be daisy chained. The unit was designed to be stacked on top of the computer, and beneath the monitor. Each unit required its own disk controller card and the number of units was limited to the number of available slots. Originally released with a DB-25 connector, to match that of the Apple III Plus, it was the first to adopt Apple's standard DB-19 floppy drive connector.

Apple later introduced the UniDisk 5.25 (A9M0104) in a plastic case, which modernized the appearance of the Disk II to better match the Apple IIe, followed by a matching Platinum-gray version which was renamed Apple 5.25 Drive (A9M0107), companion to the 800K Apple 3.5 Drive, and introduced alongside the first Platinum-colored computer the Apple IIGS. Essentially it was a single half-height Disk II mechanism inside an individual drive enclosure. All of these drives introduced a daisy chain pass-through port. While the drives are essentially interchangeable among Apple II computers, only the Apple 5.25 Drive can be used with the Apple IIe Card on a Macintosh LC.

The Disk IIc (A2M4050) was a half-height 5.25-inch floppy disk drive introduced by Apple Computer in 1984 styled for use alongside the Apple IIc personal computer, the only other Apple II to contain a built-in drive mechanism as well. The disk port on the original IIc was only designed to control an external 5.25 disk drive, and as such, this particular drive omitted a daisy-chain port in back. It was possible to use on other Apple II models, so long as it came last in the chain of drive devices (due to lacking a daisy-chain port). Essentially the same as the full-height DIsk II, it offered slightly faster access time. Apple sold the Disk IIc for US$329, and other companies later sold similar drives for less. [7]

Not to be confused with the Apple 5.25 Drive (A9M0110), in 1987 Apple sought to better compete in the IBM dominated business market by offering a means of cross-compatibility. Alongside the release of the Macintosh SE & Macintosh II, Apple released the Apple PC 5.25" Drive which required a separate custom PC 5.25 Floppy Disk Controller Card for each Mac, for use with industry standard 5.25" 360K formatted flexible disks. It was similar in appearance to the Disk IIc. Through the use of special Macintosh Apple File Exchange utility, the drive could read and write files between Mac and MS-DOS formats. Translators could convert documents between WordStar and MacWrite, among others.[8]

Unfortunately, this drive is not compatible with any Apple II computer or the Apple IIe Card for the Macintosh LC, nor will it allow a Macintosh to read or write to 5.25" Apple II formatted disks. This drive was made obsolete by the industry-wide wide adoption of 3.5" disks and was replaced by the Apple FDHD Drive which could not only read and write DOS and Windows formats, but the Apple II ProDOS format as well. It is the only 5.25" drive manufactured by Apple exclusively for, and that can be used by the Macintosh.

The circuitry of these two controllers are identical. The Disk II header pin numbering is per the Disk II controller card silkscreen and the circuit schematic given in the DOS 3.3 manual. The Uni/Duo Disk D-19 pinout is taken from the Apple //c Reference Manual, Volume 1[9].