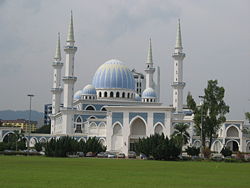 It was constructed between 1991 and 1993 by DZJ Architect and Associates. When it was completed, it faced numerous problems including water leaking from the roof but was eventually repaired.