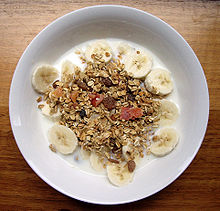 /ˈmjuːzlɪ/ or /ˈmuːzlɪ/; Swiss German: Müesli [ˈmyəz̥li], Standard German: Müsli) is a popular breakfast cereal based on uncooked rolled oats, fruit and nuts. It was developed around 1900 by Swiss physician Maximilian Bircher-Benner for patients in his hospital. It is available as a packaged dry form, or it can be made fresh.

In Switzerland and southern Germany, it is also eaten as a light evening dish; Birchermüesli complet is muesli with butterbrot and milk coffee.

Originally known in Swiss German as Birchermüesli or simply Müesli, the word is an Alemannic diminutive of Mues which is related to the Old English word moose, meaning stew or pottage.[1]

Muesli was introduced around 1900 by the Swiss physician Maximilian Bircher-Benner for patients in his hospital,[2] where a diet rich in fresh fruit and vegetables was an essential part of therapy. It was inspired by a similar "strange dish" that he and his wife had been served on a hike in the Swiss Alps. Bircher-Benner himself referred to the dish simply as "d'Spys" (Swiss German for "the dish", in German "die Speise"). Muesli in its modern form became popular in western countries starting in the 1960s as part of increased interest in health food and vegetarian diets.Traditional muesli was eaten with orange juice and not milk.

Packaged muesli is a loose mixture of mainly rolled oats and/or cornflakes together with various pieces of dried fruit, nuts, and seeds. It commonly contains other rolled cereal grains such as wheat or rye flakes as well. There are many varieties, some of which may also contain honey, spices, or chocolate. This dry packaged muesli can be stored for many months. It can be served quickly after mixing it with milk, yogurt, coffee, hot chocolate, fruit juice, or even just plain water. If desired, pieces of fresh fruit may be added. Alternatively, the mix may be soaked overnight in milk and then served with fresh fruit or compote to taste. 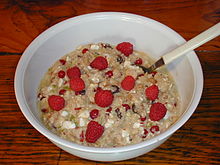 The original Bircher-Benner recipe is proportionately the opposite of most muesli available in today's supermarket varieties, calling for far more fruit than grains. One serving based on the original recipe consists approximately of:

The original recipe used sweetened condensed milk instead of cream, a compromise due to hygiene concerns regarding fresh milk products in 1900 (bovine tuberculosis etc.), before pasteurisation and refrigeration became commonly available. The original recipe also advised to soak the oats in water overnight as raw oats need a lengthy soaking to soften them before eating. This long soaking time is unnecessary with modern rolled "quick oats", which the manufacturers already soften through a steam treatment. While phytic acid is an antinutrient and strong chelator of important minerals, it is removed during the steam process, making muesli desirable, given its positive antioxidant qualities.