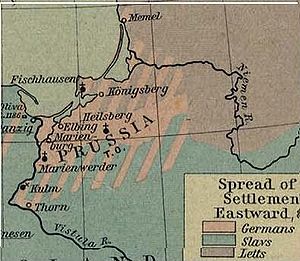 A cropped image of Prussia from "Spread of German settlements to the Eastward, 800-1400". (Full map.)

Prussia (Old Prussian: Prūsa) is a historical region in Central Europe extending from the south-eastern coast of the Baltic Sea to the Masurian Lake District. It is now divided between Poland, Russia, and Lithuania. The former German state of Prussia derived its name from the region. 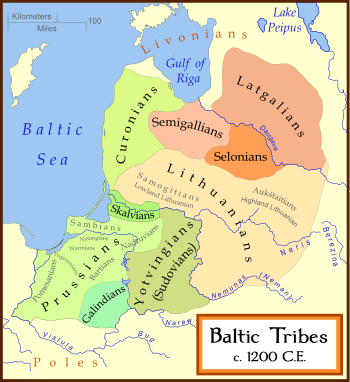 About 350 BC Pytheas called the territory Mentenomon and the inhabitants Guttones, neighbors of the Teutones. A river to the east of the Vistula was called the Guttalus (also Guthalus) and was assumed to have been either the Memel, the Alle, or the Pregel.

The Vikings started to penetrate the Eastern shores of the Baltic Sea in the 7th and 8th centuries. The largest trade centres of the Prussians, such as Truso and Kaup, seem to have absorbed a number of Norsemen. Prussians used the Baltic Sea as a trading route, frequently traveling from Truso to Birka (present-day Sweden).

At the end of the Viking Age, the sons of Danish king Harald Bluetooth and Canute the Great launched several expeditions against the Prussians. They destroyed many areas in Prussia, including Truso and Kaup, but failed to dominate the population totally. A Viking (Varangian) presence in the area was "less than dominant and very much less than imperial."[1]

According to a legend, recorded by Simon Grunau, the name "Prussia" is derived from Pruteno (or Bruteno), the chief priest of Prussia and brother of the legendary king Widewuto, who lived in the 6th century. The regions of Prussia and the corresponding tribes are said to bear the names of Widewuto's sons — for example, Sudovia is named after Widewuto's son Sudo. In the first half of the 13th century, Bishop Christian of Prussia recorded the history of a much earlier era. Adam of Bremen mentions Prussians in 1072.

The Old Prussians spoke a variety of languages, with Old Prussian belonging to the Western branch of the Baltic language group. Related, but not mutually intelligible, are the modern representatives of the Baltic languages: Latvian and Lithuanian, from the East Baltic branch. Roman historians had documented the Prussian tribes as easterners, with Tacitus' referring to them as the Aesti.[2]

The territory was identified as Brus in the 8th century map of the Bavarian geographer Adalbert of Prague. He went to the area as a Christian missionary, accompanied by armed guards, sent by Boleslaw I of Poland to convert the Prussians. He was killed by a Prussian pagan priest in 997.[3] 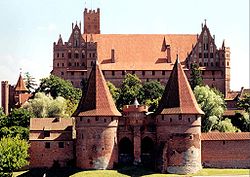 The center of Prussia until 1466: Ordensburg Marienburg, today called Malbork

Attempts at conquest of Prussia

After the state of the Polans was established in the 10th century, they tried to conquer the land of the Prussians. Boleslaw I Chrobry sent Adalbert of Prague in AD 997 on a military and Christianizing mission. In 1015, Boleslaw sent soldiers again, with some short-lived success, gaining regular paid tribute from some Prussians in the border regions, but it did not last. Polish rulers sent invasions to the territory in 1147, 1161/1166 and a number in the early 13th century. All these were repelled by the Prussians, but the Culmer Land region became a contested area exposed to frequent raids. 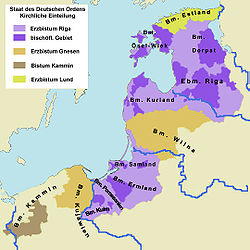 Catholic dioceses in Prussia and adjacent areas. Situation after the conquest in the late 13th century. Areas in purple under control of the Monastic State of the Teutonic Knights

In the 13th century Konrad of Masovia had called for Crusades and tried for years to conquer Prussia, but failed. Thus the pope set up further crusades. Finally he invited the Teutonic Knights to fight the inhabitants of Prussia in exchange for a fief of Chełmno Land. Prussia was conquered by the Teutonic Knights during the Prussian Crusade and administered within their Teutonic Order state. After the acquisition of Pomerelia in 1308/10, the meaning of the term Prussia was widened to include areas west of the Vistula.

With the Second Peace of Thorn (1466), Prussia was divided into eastern and western lands. The western part became the autonomous Royal Prussia within the Kingdom of Poland, while the eastern part of the monastic state became a fief of Poland. In 1492, a life of Dorothea of Montau, published in Marienburg (Malbork), became the first printed publication in Prussia. 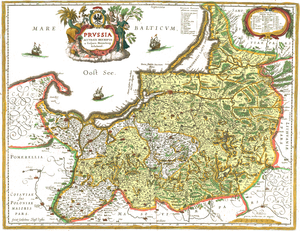 Map by Caspar Henneberg, Elbing 1576: Duchy and Royal Prussia originally with same color (for the duchy the color was added later) 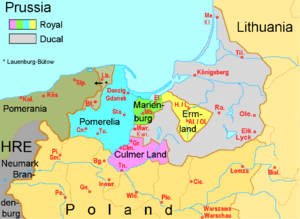 Prussia after 1466: light grey – Duchy of Prussia.
colored – Royal Prussia with its Voivodeships in personal union with the Polish-Lithuanian Commonwealth

During the Protestant Reformation, endemic religious upheavals and wars occurred, and in 1525, the last Grand Master of the Teutonic Knights, Albert of Brandenburg, a member of a cadet branch of the House of Hohenzollern, adopted the Lutheran faith, resigned his position, and assumed the title of "Duke of Prussia." In a deal partially brokered by Martin Luther, the Duchy of Prussia became the first Protestant state and a vassal of Poland. The ducal capital of Königsberg, now Kaliningrad, became a centre of learning and printing through the establishment of the Albertina University in 1544.

Ducal Prussia passed to the senior Hohenzollern branch, the ruling Margraves of Brandenburg, in 1618, and Polish sovereignty over the duchy ended in 1657 with the Treaty of Wehlau. Because Ducal Prussia lay outside of the Holy Roman Empire, Frederick I achieved the elevation of the duchy to the Kingdom of Prussia in 1701. The former ducal lands became known as East Prussia. Royal Prussia was annexed from the Polish-Lithuanian Commonwealth by the Kingdom of Prussia during the 18th century Partitions of Poland and administered within West Prussia.

Though the Kingdom of Prussia was a member of the German Confederation from 1815 to 1866, the provinces of Posen and Prussia were not a part of Germany[4] until the creation of the German Empire in 1871 during the unification of Germany.

By the Treaty of Versailles, some territories of West Prussia and the Province of Posen that had belonged to the Prussian kingdom[5] and the German Empire were ceded to the Second Polish Republic. East Prussia, minus the Memelland, received some districts of former West Prussia and remained within the German Weimar Republic.

According to the Potsdam Conference in 1945 after World War II, the Prussian region was divided between Poland and the Soviet Union. Western Prussia (West Prussia / Royal Prussia) and the East Prussian lands of Warmia and Masuria are in Poland, while northern East Prussia was divided between the Russian and Lithuanian Soviet republics. The German state of Prussia, of which the Prussian region was but a small part, was dissolved in 1947.