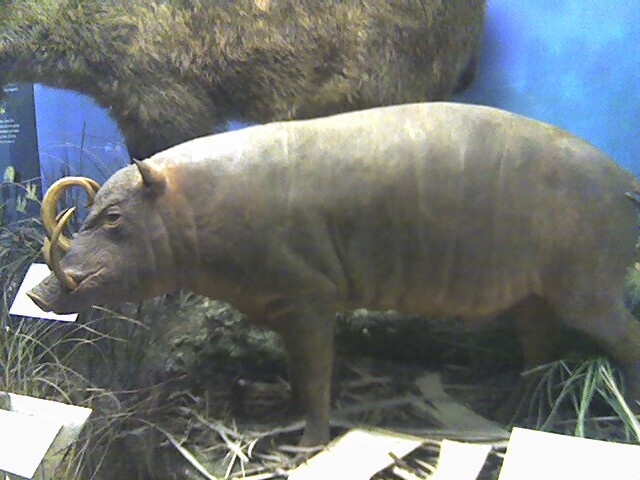 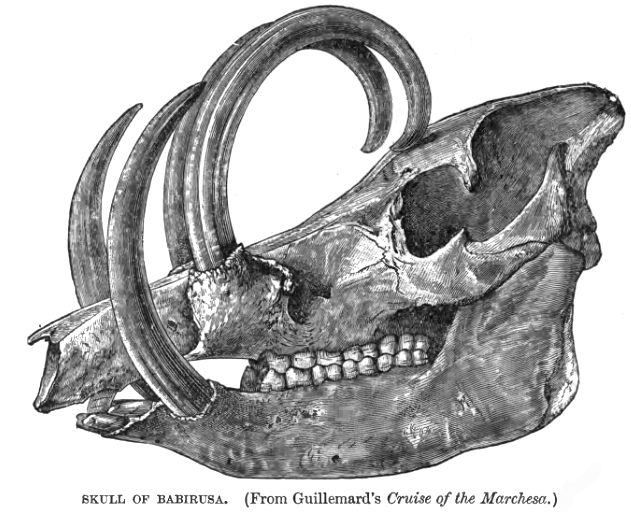 The common and scientific names are various transcriptions of its local name, which quite literally means "pig-deer" (from Malay "babi" "pig" + "rusa" "deer" - see also ) in reference to the huge tusks of the male suggestive of a deer's s - and in fact used for a similar purpose.

The babirusa has usually been classified as a single species in the "Babyrousa", but recent work suggests that there may be several species, differentiable on the basis of geography, body size, amount of body hair, and the shape of the upper canine tooth of the male. Most experts agree that babirusas are part of the pig family, and are one of the oldest living members of the family, representing a subfamily, Babyrousinae, that branched off from the branch of the pig family ( ) during the or early .

The Babirusa is native to the large eastern Indonesian island of and surrounding islands. Its habitat is the underbrush of tropical forests and , and the shores of rivers and lakes. Its mostly-hairless, mottled-grey-and-brown hide provide it with a degree of . The babirusa is known for its two pairs of s; both its upper and its lower pairs of canine teeth are greatly enlarged, and curve up and back towards the head. The upper canines of the male babirusa are so curved and enlarged that they emerge through the flesh, by way of holes, to pass through the top of the snout.

Because it is split-hooved and has a three-chambered stomach (and was thus thought to be a ruminant for a long time), there was some dispute in ( law) as to whether the babirusa pig is, in fact, (permitted according to Jewish dietary laws). Eventually it was found that the animal is not a true , and thus remains 'trefe' like other pigs.

In captivity, the species is very inbred. There are 2 subspecies kept in zoos. One subspecies is only kept in American zoos, while the other is found mainly in European zoos. The has an excellent breeding record for this animal. There are not many zoos that have bred the animal; some that have are , , , and .

In 2006, a male babirusa and a female domestic pig were accidentally allowed to interbreed in the . The offspring were 5 hybrid piglets most resembling the babirusa, both in their teeth and skin colour. [http://denmark.dk/portal/page?_pageid=374,610590&_dad=portal&_schema=PORTAL&ic_itemid=929035]