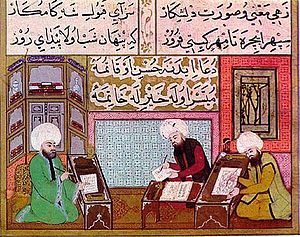 Ottoman Miniature or Turkish miniature was an art form in the Ottoman Empire, which can be linked to the Persian miniature tradition,[1] as well as strong Chinese artistic influences. It was a part of the Ottoman Book Arts together with illumination (tezhip), calligraphy (hat), marbling paper (ebru) and bookbinding (cilt). The words taswir or nakish were used to define this art in Ottoman language. The studios the artists worked in were called Nakkashane. The miniatures were not signed. This is partly because of the world view of the tradition that rejected individualism. Another reason is that the works were not created entirely by one person: The head painter designed the composition of the scene and his apprentices drew the contours (which is called tahrir) with black or colored ink and then painted the miniature without creating an illusion of third dimension. The head painter, and much more often the scribe of the text were named and depicted in some of the manuscripts. The understanding of perspective is different from that of European Renaissance Painting tradition and the scene depicted may include different time periods and spaces. The miniatures followed closely the context of the book, resembling illustrations of the picture books today. The colors were obtained by ground powder pigments mixed with egg-white and later with diluted gum arabic. The colors were brilliant. Contrasting colors were used side by side with warm colors that reminds us of the 20th century avant-garde painters' approach in color selection. The color nuances of the same shade were applied in a masterly fashion. The most used colors were bright red, scarlet, green and different shades of blue.

The world-view underlying the Ottoman miniature painting was also different from that of European Renaissance Painting tradition. The painters did not mainly aim to depict the human beings and other living or non-living beings realistically, although increasing realism is found from the later 16th century onwards. Like Plato, they despised mimesis because according to the world view of sufism the appearance of worldly beings was not permanent and worth devoting effort to. The Ottoman artists wanted to hint at an infinite and transcendent reality (that is Allah, according to the Sufism's pantheistic point of view) with their paintings so they stylized and abstracted everything depicted. 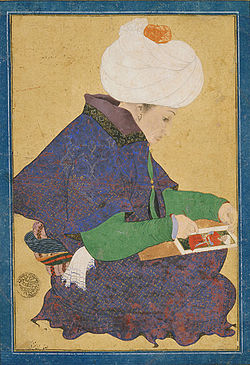 Portrait of a painter during the reign of Mehmet II

During the reign of Mehmed II a court workshop called Nakkashane-i Rum, that also functioned as an academy, was founded in Topkapi Palace in Istanbul to create illuminated picture manuscripts for the Sultan and the courtiers.

At the beginning of the 16th century, the Herat workshop of Persian miniaturists was closed and its famous instructor Behzad (or Bihzad) went to Tabriz. After the Ottoman emperor Yavuz Sultan Selim briefly conquered Tabriz in 1514, taking many manuscripts back to Istanbul, the "Nakkashane-i Irani" (The Persian Academy of Painting) was founded in Topkapi Palace for imported Persian artists. The artists of these two painting academies formed two different schools of painting: The artists in Nakkashane-i Rum were specialized in documentary books, like the Shehinshahname, showing the public, and to some extent the private, lives of rulers, their portraits and historical events; Shemaili Ali Osman-portraits of rulers; Surname-pictures depicting weddings and especially circumcision festivities; Shecaatname-wars commanded by pashas. The artists in Nakkashanei-i Irani" specialized in traditional Persian poetic works like the Shahnameh, the Khamsa of Nizami, containing Layla and Majnun and the Iskendername or Romance of Alexander, Humayunname, animal fables and anthologies. There were also scientific books on botany and animals, alchemy, cosmography and medicine; technical books; love letters; books about astrology and dream reading.

The reigns of Suleyman the Magnificent and especially Selim II (1566-1574) in the second half of 16th century were the golden age of the Ottoman miniature with its own characteristics and authentic qualities. Nakkas Osman was the most important miniature painter of the period, while Nigari developed portrait painting.

Matrakci Nasuh was a famous miniature painter during the reigns of Yavuz Sultan Selim and Suleyman the Magnificent. He created a new painting genre called topographic painting. He painted cities, ports and castles without any human figures and combined scenes observed from different viewpoints in one picture.

During the reign of Selim II (1566-1574) and Murat III's (1574-1595), the classical Ottoman miniature style was created. The renowned miniature painters of the period were Nakkas Osman, Ali Celebi, Molla Kasim, Hasan Pasa and Lutfi Abdullah.

By the end of the 16th century and in the beginning of 17th century, especially in the reign of Ahmed I, single page miniatures intended to be collected in albums or murakkas were popular. They had existed at the time of Murat III, who ordered an album of them from the painter Velijan. In 17th century, miniature painting was also popular among the citizens of Istanbul. Artists under the name of "Bazaar Painters" who worked with other artisans in the bazaars of Istanbul (Carsi Ressamlari - a definition made by Metin And, in "17. Yüzyıl Türk çarşı ressamları." Tarih ve Toplum, no. 16 (April 1985): 40-44) at the demand of citizens.

A new cultural genre known in Ottoman history as the "Tulip Period" occurred during the reign of Ahmed III. Some art historians attribute the birth of the unique style called "Ottoman Baroque" to this period. The characteristics of the period carried the influences of French baroque. In this period, a grand festival for the circumcision rituals for the sons of Ahmed III was organized. Artisans, theatre groups, clowns, musicians, trapeze dancers and citizens joined in the festivities. A book called Surname-i Vehbi tells about this festival. This book was depicted by Levni or Abdülcelil Levni Çelebi (the name Levni is related to the Arabic word levn (color) and was given to the artist because of the colorful nature of his paintings) and his apprentices. His style of painting was influenced by Western painting and very different from the earlier miniature paintings.

After Levni, Westernization of Ottoman culture continued and, with the introduction of printing press and photography, no more illuminated picture manuscripts were produced. From then on, wall paintings or oil paintings on toils were popular. So the miniature painting lost its function.

After a period of crisis in the beginning of the twentieth century, miniature painting was accepted as a "decorative art" by the intellectuals of the newly founded Turkish Republic, and in 1936, a division called "Turkish Decorative Arts" was established in the Academy of Fine Arts in Istanbul, which included miniature painting together with the other Ottoman Book Arts. Suheyl Unver educated many artists following the tradition of Ottoman Book Arts.

Contemporary miniature artists include Ömer Faruk Atabek, Sahin Inaloz, Cahide Keskiner, Gülbün Mesara, Nur Nevin Akyazici, Ahmet Yakupoğlu, Nusret Çolpan, Orhan Dagli and many others from the new generation. Contemporary artists do not consider miniature painting as merely a "decorative art" but as a fine art form. Different from the traditional masters of the past, they work individually and sign their works. Also, their works are not illustrating books anymore but being exhibited in fine art galleries.

Turkish Miniatures from the 13th to the 18th century R. Ettinghausen

Ottoman miniatures and its downfall form the theme of the novel My Name is Red by Orhan Pamuk.