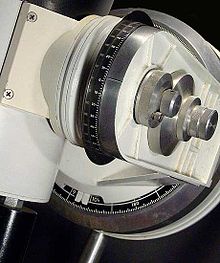 Setting circles are used on telescopes equipped with an equatorial mount to find astronomical objects in the sky by their equatorial coordinates often used in star charts or ephemeris.

Historically setting circles have rivaled the telescopes optics as far as difficulty in construction. Making a set of setting circles required a lot of precision crafting on a dividing engine. Setting circles usually had a large diameter and when combined with a vernier scale could point a telescope to nearly an arc minute of accuracy. In the 20th century setting circles were replaced with electronic encoders on most research telescopes.

In amateur astronomy, setting up a portable telescope equipped with setting circles requires:

Accuracy of pointing the telescope can be hard to achieve. Some sources of error are:

It is common to blame an unlevel tripod as a source of error, however when a proper polar alignment is performed, any induced error is factored out.

These sources of error add up and cause the telescope to point far from the desired object. They are also hard to control; for example, Polaris is often used as the celestial north pole for alignment purposes, but it is over half a degree away from the true pole. Also, even the finest graduations on setting circles are usually more than a degree apart, which makes them difficult to read accurately, especially in the dark. Nothing can be done if the optical tube is not perpendicular to the declination axis or if the R.A. and Dec axes are not perpendicular, because these problems are next to impossible to fix.

Even with some inaccuracies in polar alignment or the perpendicularity of the mount, setting circles can be used to roughly get to a desired object's coordinates, where a star chart can be used to apply the necessary correction. Alternatively, it is possible to point to a bright star very close to the object, rotate the circles to match the star's coordinates, and then point to the desired object's coordinates. Setting circles are also used in a modified version of star hopping where the observer points the telescope at a known object and then moves it a set distance in RA or declination to the location of a desired object.

Digital setting circles (DSC) consist of two rotary encoders on both axis of the telescope mount and a digital readout. They give a highly accurate readout of where the telescope is pointed and their lit display makes them easier to read in the dark. They have also been combined with microcomputers to give the observer a large database of celestial objects and even guide the observer in correctly pointing their telescope.

In contrast to a GOTO telescope mount, a mount equipped with DSC alone is sometimes called a "PUSH TO" mount.