A separation barrier is a wall or fence constructed to limit the movement of people across a certain line or border, or to separate two populations. These structures vary in placement with regard to international borders and topography. The most famous example of a separation barrier is probably the Great Wall of China, a series of barriers separating the Empire of China from nomadic powers to the north; the most prominent recent example was the Berlin Wall that separated the enclave of West Berlin from the rest of East Germany during most of the Cold War era.

Note: The table can be sorted alphabetically or chronologically using the

In January 2006, Afghanistan's government decreed that the United Nations, the American embassy and other foreign organizations in Kabul must clear concrete security barriers that protect their buildings. Most Kabul streets are full of security barriers and large concrete anti-blast blocks aimed at protecting against the insurgent and terrorist attacks that have risen in the past four years since the fall of the Taliban regime. The decree follows pressure from the newly formed Afghan parliament and public complaints over the heavy traffic jams caused by the barriers. The foreign groups are expressing concern and saying that the security situation does not permit that. The United Nations is one of the organizations concerned by the Afghan government's order. UN chief spokesman in Kabul Adrian Edwards said that security barriers are still required. "We are in a difficult security environment which certainly hasn't improved during 2005", Edwards said. "There have been a number of suicide attacks. Within the UN here, I think none of us would wish to be behind these barricades, we would prefer things could be open as we are in some other countries. However, there have been necessary for our security, that's why they are there." The Afghan government has said it is determined to remove all the barricades. The directive of the government says that "blocking the footpaths, streets, and roads is illegal" and that no one has the right to create obstructions, the only exception being the presidential palace.

In 2003, Botswana began building a 300-mile (480 km)-long electric fence along its border with Zimbabwe. The official reason for the fence is to stop the spread of foot-and-mouth disease among livestock. Zimbabweans argue that the height of the fence is clearly intended to keep out people. Botswana has responded that the fence is designed to keep out cattle, and to ensure that entrants have their shoes disinfected at legal border crossings. Botswana also argued that the government continues to encourage legal movement into the country. Zimbabwe was unconvinced, and the barrier remains a source of tension between the two nations.[2]

Brunei is building a security fence along its 20-kilometer border with Limbang to stop the flow of irregular migrants and smuggled goods.

The People's Republic of China (PRC) has two Special Administrative Regions, namely Hong Kong and Macau on its southeastern coast. Both of them maintain controlled intra-national borders with the neighbouring Guangdong province in Mainland China. An identity document is inspected when one crosses the border.

Under the principle of "One Country, Two Systems", the two Special Administrative Regions continue to maintain their own customs and immigration policies, which are independent of those in Mainland China after the handovers. Due to differences in the policies between the special administrative regions and the Mainland, the Hong Kong-Guandgong and Macau-Guangdong borders have been maintained in operation after the handovers.

Hong Kong has a border stretching 32 km with the Shenzhen Special Economic Zone of Guangdong that features fences, thermal image sensors, lights and closed-circuit television. The border is also patrolled regularly by police. Just south of Shenzhen River (the geographical delimitation of the border) is a strip of rural land with restricted access, the 28 km² Closed Area. Currently, the four road border crossings are located at Sha Tau Kok, Man Kam To, Lok Ma Chau and Shenzhen Bay, and a railway and traveller crossing is located at Lo Wu. The residents of the Hong Kong Special Administrative Region are required to have their Hong Kong ID Cards inspected by the Hong Kong Immigration Department and their Home Return Permits inspected by the Public Security Bureau of Guangdong when they cross the border.

Macau has been maintaining a 340-metre controlled border with Zhuhai City in Guangdong with a crossing available at the Border Gate (built in 1870).[3] The border crossing is equipped with 54 counters for travelers and 8 for vehicular traffic. Opened in 1999, the Lotus Bridge in Macau supplemented what has been the only border crossing into mainland China through Border Gate. Both border crossings allow access into Zhuhai.

China, in October 2006, is also building a security barrier along its border with North Korea to prevent the illegal immigrants from North Korea.[4]

Since 1974 Turkey has constructed and maintains a separation barrier of 300 kilometres (190 mi) along the 1974 Green Line (or ceasefire line) dividing the Republic of Cyprus into two parts, in violation of multiple United Nations Security Council Resolutions; the de facto Turkish controlled northern one-third of the Republic and the remaining southern two-thirds of Cyprus to separate Turkish and Greek Cypriot populations.

A security fence around the Egyptian town of Sharm el-Sheik was constructed in response to a spate of terrorist attacks at the resort. Government officials say the fence, equipped with checkpoints to allow vehicles into the area, will deter terrorists. In addition South Sinai Governor Mustafa Afifi said the fence will help control the effect of heavy seasonal rains and will reduce the number of vehicle-camel crashes that occur on the Sharm el-Sheik highway.

The Rafah Border Crossing (Arabic: معبر رفح‎, Hebrew: מעבר רפיח‎) is an international border crossing between Egyptian and Palestinian-controlled Rafah. It was built by the Israeli and Egyptian governments after the 1979 Israel-Egypt Peace Treaty and 1982 Israeli withdrawal from the Sinai Peninsula, and was managed by the Israel Airports Authority until it was evacuated on 11 September 2005 as part of Israel's unilateral disengagement plan. It has since become the mission of the European Union Border Assistance Mission Rafah (EUBAM) to monitor the crossing.

After having made an agreement with Frontex on the guard of the maritime borders of Greece with Turkey[5] the Greek government decided a wall to be built at the land border with Turkey, the Evros River.[6] These actions have been made as a reaction to the illegal immigration to Greece through the Greco-Turkish borders. These immigrants are originated from Muslim Asian and African states. From January to the beginning of November 2010, 32,500 illegal migrants were intercepted in a single 12.5-kilometer stretch of the Turkish-Greek border along the Evros river.[7] Actually this site is the main entrance of illegal immigrants to the EU from the Asian continent.[7] Illegal immigration is a current subject between the two countries. 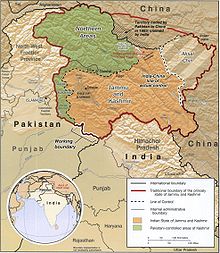 Along the black-dotted line and on the working boundary

Since the mid-1990s, India has been involved in the construction of some of the lengthiest separation barriers along its international borders. Six of the nine countries neighboring India are classified as Least Developed Countries. As a consequence, thousands of people from these countries, especially from Bangladesh, Nepal and Burma, illegally immigrate into India.

The Indo-Bangladeshi barrier and Indo-Burma barrier are being built to check smuggling, illegal immigration and possible infiltration by terrorists.

In addition, India completed the construction of the Indian Kashmir barrier which runs along the Line of Control in Kashmir. The purpose of this barrier is to prevent infiltration by Pakistan-based Azad Kashmiris to visit their families. The Indian government is also considering the construction of a barrier along the Indo-Pakistan border.

On 10 April 2007, the U.S. military began constructing a 3.6 metre (12 ft) high concrete wall of 5 kilometres (3.1 mi) around the predominantly Sunni district of Adhamiya in Baghdad.

Due to Israel's specific situation of being at war and conflict with much of its Middle Eastern environment, separation barriers and walls have been and remain an issue of major military (and often also political) concern:

South Korea has constructed a separation barrier[citation needed] between its territory and North Korea to obstruct any southward movement by the army of North Korea. The border features:[improper synthesis?]

Morocco has constructed a separation barrier in Western Sahara to keep the guerrilla fighters of Polisario out. 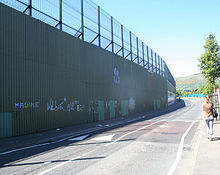 A "peace line" in Belfast

In Belfast, Derry and other settlements in Northern Ireland, barriers called "peace lines" have been built to separate the two main communities. Their purpose is to minimize inter-communal violence between Irish nationalists/republicans (who mainly self-identify as Irish and/or Catholic) and unionists/loyalists (who mainly self-identify as British and/or Protestant). They were first built following the 1969 riots and beginning of the "Troubles". They have continued to be built and expanded since the Belfast Agreement of 1998.

In September 2005, Pakistan stated it has plans to build a 1,500-mile (2,400 km) fence along its border with Afghanistan to prevent Islamic insurgents and drug smugglers slipping between the two countries. Former Pakistani President Pervez Musharraf has subsequently offered to mine the border as well.[9][10]

There is an electronic security barrier (ex-"Iron Curtain") along the old Soviet border. Also, a security barrier is on the border of Russia with Norway, Finland, China, Mongolia and North Korea. There is no barrier on Russian territory along the border with Estonia, Latvia, Belarus, or Ukraine, but there are some barriers on Estonian, Latvian and Ukrainian territory along the Russian border. It was reported in 2005 that the Russian government was considering the construction of a security barrier along its border with Chechnya as part of its efforts to combat terrorism.[11]

Saudi Arabia has begun construction of a separation barrier or fence between its territory and Yemen to prevent the unauthorized movement of people and goods into and out of the Kingdom.

In 2006 Saudi Arabia proposed plans for the construction of a security fence along the entire length of its desert border of 900 kilometres (560 mi) with Iraq in a multi-million dollar project to secure the Kingdom's borders in order to improve internal security, control illegal immigration and bolster its defences against external threats.[12]

In 1975 a security fence of 120 kilometres (75 mi) was erected by South Africa to keep the violent revolution in Mozambique from spilling into Kruger National Park. [1] In 1990 it was reported:

In 2005 it was reported that only a relatively small portion of the high-security border fence separating South Africa's Kruger National Park with Zimbabwe's Gonarezhou Park has been removed. Security concerns, especially about illegal immigrants and the smuggling of weapons and four-wheel-drive vehicles, have been hindering the removal of more sections of the border fence between the Kruger and Limpopo parks.[16]

The European Union and Spain have constructed barriers between the Spanish exclaves of Ceuta and Melilla and Morocco to prevent illegal immigration and smuggling.

Even though both the United Kingdom and Spain are part of the European Union, the border fence separating Gibraltar and Spain is still relevant since Gibraltar is not part of the Schengen Area and is outside of the customs union and VAT area. The border crossing is open twenty-four hours a day to facilitate customs collection by Spain.

The UAE is building a security barrier along its border with Oman.

The United Nations has constructed a demilitarized zone to stop Iraq from re-invading Kuwait; Kuwait plans to install a new separation barrier as well. 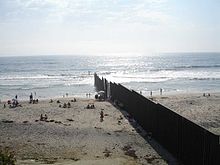 Beach in Tijuana, Mexico at the US border. Photo taken before security upgrades.

The United States has constructed a separation barrier along 130 kilometres (81 mi) of its border with Mexico of 3,169 kilometres (1,969 mi) to prevent unauthorized immigration into the United States and to deter smuggling of contraband, particularly illegal drugs. There has been legislation in the U.S. Congress on lengthening the barrier, but progress has been slow, both from lobbying and lack of funding.

In 1999 Uzbekistan began construction of a barbed wire fence to secure their border with Kyrgyzstan.

In 2001 Uzbekistan fortified the border fence with Afghanistan. 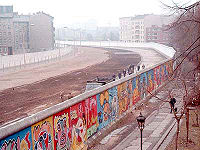