The Worshipful Company of Mercers is the premier Livery Company of the City of London and ranks first in order of precedence. It is the first of the so-called "Great Twelve City Livery Companies". It was incorporated under a Royal Charter in 1394. Its aim was to act as a trade association for general merchants, and especially for exporters of wool and importers of velvet, silk and other luxurious fabrics. By the sixteenth century many members of the Company had lost any connection with the original trade. Today, the Company exists as a charitable institution, supporting a variety of causes. The Company's motto is Honor Deo, Latin for "Honour to God".

The word "mercery" derives from the Latin merx, mercis, "merchandise" [2] from which root also derives the word "merchant".[3] The word mercero still used in Spanish has a meaning similar to haberdasher, although the mediaeval mercers would not have recognised any relationship to that trade which was covered by a separate company.

In education, the Company has administered St Paul's School since 1509, and St Paul's Girls' School since 1904, and retains close links with Collyer's College, Dauntsey's School, Abingdon School, Peter Symonds College and Gresham College, all founded by Mercers. In recent times the Company has founded a City Technology College (Thomas Telford School) and two City Academies (Walsall Academy and Sandwell Academy). There was also a Mercers' school which was granted its first charter in 1447. It closed in 1959. The school was most recently based in Barnard's Inn in Holborn, London. This is now the home of Gresham College. 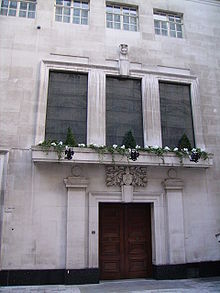 The Mercers' Company is based at Mercers' Hall, Ironmonger Lane (off Cheapside), London EC2. From the 14th century onwards the Company held its meetings in the Hospital of St Thomas of Acon on Cheapside. Between 1517 and 1524 the Company built a small chapel of its own on this land, with the first Mercers' Hall above it, fronting Cheapside. The building was destroyed in the Great Fire of London in 1666. The second Hall, designed by Edward Jarman and John Oliver, opened in May 1676. The Hall was extensively refurbished during the period 1877 to 1881 (the porch of the 1676 building is now incorporated into the facade of Swanage town hall). The frontage was remodelled by George Barnes Williams and the interiors were redesigned by John Gregory Crace, the renowned Victorian designer. The Hall was destroyed by fire in 1941, during the Blitz. The third and present Mercers' Hall was opened in May 1958. The architect was E Noel Clifton of Gunton and Gunton. The Hall incorporates fittings from the old Hall, including some 17th century woodwork and Victorian stained glass. The Mercers' Company is the only City Livery Company to have its own private chapel.

In 2006 the Mercers published an annual review of their activities. The accounts show that the Mercers have £454.6 million assets under management. £315.6 million of that total was in the form of property and other fixed assets, the property portfolio includes 90 residential flats in Covent Garden. In the year to August 2005 the Mercers gave away £9 million to charity.

Among famous Mercers were: