Marsalforn is a village on the north west coast of Gozo, the second largest island of the Maltese archipelago. The village lies between the hill-top towns of Xagħra and Żebbuġ The village forms part of the locality of Żebbuġ. Marsalforn is the most popular tourist resort on Gozo. It is well served with hotels, restaurants, bars and beaches. The village has also become the premiere diving centre on Gozo, with several scuba diving schools locating on the sea front. 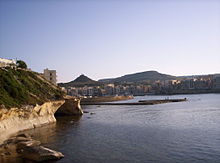 Marsalforn is a composite word. "Marsa" is an Arabic word meaning `port` or `bay.` There is disagreement on the origin of the second part of the word - `forn` -. Forn means "a bakery" in Maltese, but it is highly improbable that this has anything to do with Marsalforn, for it is unlikely that a bakery would be built in an area with a small population. It is quite likely that this name, like that of other Gozitan ports, might refer to a type of ship. In that case it would derive from Liburna. an Illyrian type of a ship, which became livurna in Greek, and lifurna in Arabic. The name might also have been derived from forna, a word used by Gozitan fishermen to refer to " a cave hollowed out by the sea". There are several of these in Marsalforn, the best known being Ghar Qawqla `the cave at the steep hill`.

To the south of Marsalforn is a fertile valley named after the village. The valley is bounded by several hillocks and use to be known as the "haven of hillocks". [1] The most famous of these is tas-Salvatur (Our Saviours Hill) also referred locally as Tal-Merzuq Hill (Ray of Light) due to the legends surrounding it, recorded by Giovanni Abela in the 17th Century.

This volcano like hill has acquired the attention of the people since 1901, when a large wooden cross was erected on its peak. Three years later, when Gozo was consecrated to Christ the Saviour, a stone statue of Christ replaced the cross. This was in turn replaced by a gigantic concrete statue towering twelve meteres above the hill, which remains to this day.

As recorded in the Acts of the Apostles, Paul the Apostle was shipwrecked in Malta, but legend maintains that it was from Marsalforn that he embarked for Sicily and Rome. Today, this legend is symbolised by the village's emblem, which consists of a viper encircling a sword. This refers to an episode involving Saint Paul when he remained unharmed after being bit by a viper. The village church of `Saint Paul Shipwreck` is also dedicated to the memory of Saint Paul departure from Marsalforn. The church, originally raised in the fourteenth century, has been rebuilt and enlarged many times. The foundation stone of the present church was laid in 1730. The feast is celebrated on 10 February.

Marsalforn has a history which dates back to Roman times. Until the sixteenth century, the port was the most important in Gozo. Imported food supplies from Sicily were unloaded at Marsalforn, and it was from there that passengers boarded to travel to Licata in Sicily and other continental ports. The importance of Marsalforn had grown so much that by the late sixteenth and early seventeenth century the Knights of the Order of Saint John, the rulers of Malta at the time, considered abandoning the old Citadel in the centre of the island and building a new town overlooking the port. Hostility from the Gozitan people meant that the plans were never realised.[2] They protested that they were too poor to pay the extra tax needed to finance the move and the disruption caused by the transfer of their homes from Rabat to Marsalforn would be too great. With the development of Mgarr harbour, Marsalforn lost its importance and for several centuries it remained a quiet fishing village inhabited by a small community of fishermen and their families.

The growth in the twentieth century of tourism on the Maltese island has led to a redirection of the village's economic function away from fishing. Today, although fishing remains an important industry, increasingly tourism is becoming the dominant source of employment for the local people. In the last thirty years the village has seen considerable urban expansion and has gradually extended along the crescent -shaped rocky bay towards Qbajjar. This expansion has been spurred by the growth in tourism in Gozo which has meant that several hotels, guesthouses and apartments have been built in the village. Moreover, the desire by wealthy Maltese and Gozitans for second homes in the village, combined with the increasingly large presence of foreign investors in the local housing market, has fuelled high demand for property in the village. It has also meant that the old palazzini that Marsalforn was noted for, have been sacrificied and in their stead apartment blocks have been built.

One effect of tourism has been the establishment of clear tangible seasonal changes in the village's character. During the winter months, when tourist numbers are low and second homes are frequently not used, the village gains a quite, peaceful feel. During the summer the village is a busy, vibrant place, teeming with both local and foreign visitors.