Clacton-on-Sea is the largest town on the Tendring peninsula, in Essex, England and was founded in 1871. It is a seaside resort that attracted many tourists in the summer months between the 1950s and 1970s, but which like many other British sea-side resorts went into decline as a holiday destination since holidays abroad became more affordable. These days it is more popular as a retirement location.

It is located between Jaywick and Holland-on-sea along the coastline and Great Clacton to the north. The relevant local authority is Tendring District Council.

It is situated at the eastern end of the A133, accessed via a largely improved road from the A120 junction at Hare Green, four miles east of Colchester. Nearby to the north-east is the neighbouring resort of Frinton-on-Sea.

Clacton has a pleasure pier, arcades, a golf course, caravan parks and an airfield. The town and its beaches are still popular with tourists in the summer, and there is an annual entertainment programme including the Clacton carnival held the second Saturday in August and lasting for a week. Clacton Airshow, an aerial display takes place on the Thursday and Friday before the August Bank Holiday involving historic and modern aircraft such as the Lancaster, Spitfire, Hurricane, helicopters, Harrier, Jaguar, Tornado, wing-walkers and the Red Arrows.

Clacton-on-Sea is served by a shopping area with many of the usual national chains represented and a Factory Shopping Village, in the north of the town.

Clacton-on-Sea has two theatres, the West Cliff Theatre and the Princes Theatre. The West Cliff is one of the last theatres in the country to put on an old style summer show.

Clacton was the site of the lower Palaeolithic Clactonian industry of flint tool manufacture[citation needed]. Great Clacton was founded by the Celts in c.100BC[citation needed]. There are some vague traces of Romans using the Clacton area as a seaside resort. The name Clacton dates from c.500 AD when the area was settled by Saxons. The original name, Claccingaton, means 'the village of Clacc's people'. The Domesday Book records the village as Clachintuna.

The modern day Clacton-on-Sea was founded by Peter Bruff in 1871 as a seaside resort. Originally the main means of access was by sea; Steamships operated by the Woolwich Steam Packet Company docked from 1871 at Clacton Pier which opened the same year. The pier now offers an amusement arcade and many other forms of entertainment. People who wanted to come by road had to go through Great Clacton. In the 1920s, London Road was built to cope with the influx of holidaymakers. Later, in the 1970s, the eastern section of the A120 was opened obviating the need for Clacton visitors to go through Colchester.

In 1936, Billy Butlin bought and refurbished the West Clacton Estate, an amusement park to the west of the town. He opened a new amusement park on the site in 1937 and then, a year later on 11 June 1938, he opened the second of his holiday camps. This camp was open until 1983 when due to package holidays and changing tastes Butlins decided to close the camp. It was bought by former managers at the camp who reopened it as a short-lived theme park called Atlas Park. The land was then sold and redeveloped with housing.[2]

Clacton has a cricket club and a football team called FC Clacton, whose best F.A. Cup performance was the first round. The football team play at the Rush Green Bowl with the bus shelter being the stand for the passionate supporters, it got its name after someone said it looked like a bus shelter. The club then took bus timetables and stuck them on it to look like a bus shelter. The Cricket club has many grounds around Clacton with one in Holland-on-sea and another where Essex County Cricket Club use to play. Clacton also have a rugby club with teams ranging from under 12's to a first and second team. The first and second teams play in essex league 1 and train on a tuesday night at 7 which is held at the rugby club in valley road.

Before the Industrial Revolution, Clacton's industry mainly consisted of arable farmland. As the industrial revolution spread across the country, farmers in Clacton realized that their equipment was obsolete. A steam powered mill was built in 1867 to replace the windmill, which was eventually demolished in 1918. Nowadays, the town's main industrial area is in the northeast of the town (Gorse Lane Industrial Estate and Oakwood Business Park) which contain a variety of businesses and industrial units.

St John's Church is the oldest surviving building in Clacton. It has been suggested that smugglers may have used a tunnel from the coast to the Ship Inn to smuggle goods into the country, but this is discounted by some historians.

Clacton Pier was the first building of the new resort of Clacton-on-Sea. It officially opened on 27 July 1871 and was 160 yards in length and 4 yards wide.[3] Originally built as a landing point for goods and passengers, as Clacton was becoming an increasingly popular destination for day trippers, in 1893 the pier was lengthened to 1180 ft (360m), and entertainment facilities added.[4] Bought by Ernest Kingsman in 1922, it remained in the ownership of the Kingsman family until 1971.[3] In March 2009 the pier was purchased by the Clacton Pier Company, who installed a 50 ft helter-skelter as a new focal point.[5]

A 48 turbine wind farm 7 km is being constructed off the Clacton and Holland Essex coast in the Northern Thames Estuary began. The first 9 turbines were commissioned and started generating electricity in October 2009.[6]

Clacton has an oceanic climate (Köppen "Cfb") with fairly low precipitation. This makes for pleasantly warm and relatively dry summers (which also enhances the towns popularity as a sea-side town), but also fairly chilly winter days. For the 1961-1990 observation period, Clacton averaged 103.7 days with at least 1mm of rain annually, and just 24.3 air frosts a year- comparable to south west coastal locations. 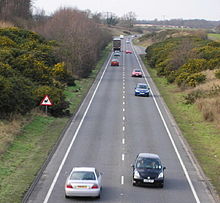 Clacton-on-Sea is located at the terminus of the A133 road which runs between Clacton and Colchester.

The town is served by Clacton-on-Sea railway station (90 minutes to London Liverpool Street station) via the Sunshine Coast Line which converges before Thorpe-le-Soken.

The town has a good bus network with routes operated by First Essex, Hedingham Omnibuses. Buses operate to destinations such as Colchester, Manningtree, Harwich and Walton-on-the-Naze. National Express operate long distance coach services from Clacton-on-Sea to London and Liverpool.

Clacton also has Clacton Airport, which has been active since its use by the RAF during the Second World War. In the 1990s, the airfield was featured along with Roly ("The Wing Commander of Clacton") on the BBC television series "Airport".

The following were all born or have lived in Clacton-on-Sea:

On the Easter weekend of 1964 rival youth gangs of Mods and Rockers descended upon Clacton-on-sea and wrecked the place starting fights with each other and vandalizing streets and shops.

In the British soap opera EastEnders, the characters of Frank Butcher and Pat Harris met at Clacton Butlins in 1958.

The music video for "Always on My Mind" by the Pet Shop Boys, was filmed in Clacton, which was also the setting for their film, It Couldn't Happen Here.

Kinky Boots, was partly filmed on Clacton Pier as was Starter for Ten with James McAvoy, James Corden & Catherine Tate.