Linux malware includes viruses, trojans, worms and other types of malware that affect the Linux operating system. Linux, Unix and other Unix-like computer operating systems are generally regarded as very well-protected, but not immune, from computer viruses. According to advocates like Scott Granneman, Linux provides better protection compared to Microsoft Windows.[1]

There has not yet been a widespread Linux malware threat of the type that Microsoft Windows software faces; this is commonly attributed to the malware's lack of root access and fast updates to most Linux vulnerabilities.[2]

The number of malicious programs — including viruses, Trojans, and other threats — specifically written for Linux has been on the increase in recent years and more than doubled during 2005 from 422 to 863.[3]

Like Unix systems, Linux implements a multi-user environment where users are granted specific privileges and there is some form of access control implemented. To gain control over a Linux system or cause any serious consequence to the system itself, the malware would have to gain root access to the system, which requires a users' password and so would be difficult to accomplish.[2]

Shane Coursen, a senior technical consultant with Kaspersky Lab, claims, "The growth in Linux malware is simply due to its increasing popularity, particularly as a desktop operating system ... The use of an operating system is directly correlated to the interest by the malware writers to develop malware for that OS."[3] Rick Moen, an experienced Linux system administrator, counters that:

[That argument] ignores Unix's dominance in a number of non-desktop specialties, including Web servers and scientific workstations. A virus/trojan/worm author who successfully targeted specifically Apache httpd Linux/x86 Web servers would both have an extremely target-rich environment and instantly earn lasting fame, and yet it doesn't happen."[4]

Some Linux users run Linux-based anti-virus software to scan insecure documents and email which comes from or is going to Windows users. SecurityFocus's Scott Granneman stated:

...some Linux machines definitely need anti-virus software. Samba or NFS servers, for instance, may store documents in undocumented, vulnerable Microsoft formats, such as Word and Excel, that contain and propagate viruses. Linux mail servers should run AV software in order to neutralize viruses before they show up in the mailboxes of Outlook and Outlook Express users."[1]

Because they are predominantly used on mail servers which may send mail to computers running other operating systems, Linux virus scanners generally use definitions for, and scan for, all known viruses for all computer platforms. For example the open source ClamAV "Detects ... viruses, worms and trojans, including Microsoft Office macro viruses, mobile malware, and other threats."[5]

The viruses listed below pose a potential, although minimal, threat to Linux systems. If an infected binary containing one of the viruses were run, the system would be infected. The infection level would depend on which user with what privileges ran the binary. A binary run under the root account would be able to infect the entire system. Privilege escalation vulnerabilities may permit malware running under a limited account to infect the entire system.

It is worth noting that this is true for any malicious program that is run without special steps taken to limit its privileges. It is trivial to add a code snippet to any program that a user may download and let this additional code download a modified login server, an open mail relay or similar and make this additional component run any time the user logs in. No special malware writing skills are needed for this. Special skill may be needed for tricking the user to run the (trojan) program in the first place.

The use of software repositories significantly reduces any threat of installation of malware, as the software repositories are checked by maintainers, who try to ensure that their repository is malware-free. Subsequently, to ensure safe distribution of the software, checksums are made available. These make it possible to reveal modified versions that may have been introduced by e.g. hijacking of communications using a man-in-the-middle attack or via a redirection attack such as ARP or DNS poisoning. Careful use of these digital signatures provides an additional line of defense, which limits the scope of attacks to include only the original authors, package and release maintainers and possibly others with suitable administrative access, depending on how the keys and checksums are handled.

Vulnerability to trojan horses and viruses results from users willing to run code from sources that should not be trusted and to some extent about distributions not by default checking the authenticity of software downloaded while a system was the target of an attack.

The classical threat to Unix-like systems is vulnerabilities in network daemons, such as SSH and web servers. These can be used by worms or for attacks against specific targets. As servers are patched quite quickly when a vulnerability is found, there have been only a few widespread worms of this kind. As specific targets can be attacked through a vulnerability that is not publicly known there is no guarantee that a certain installation is secure. Also servers without such vulnerabilities can be successfully attacked through weak passwords.

Linux servers may also be used by malware without any attack against the system itself, where e.g. web content and scripts are insufficiently restricted or checked and used by malware to attack visitors. Typically a CGI script (meant for leaving comments) by mistake allows inclusion of code exploiting vulnerabilities in the web browser.

Older Linux distributions were relatively sensitive to buffer overrun attacks: if the program did not care about the size of the buffer itself, the kernel provided only limited protection, allowing an attacker to execute arbitrary code under the rights of the vulnerable application under attack. Programs that gain root access even when launched by a non-root user (via the setuid bit) were particularly attractive to attack. However as of 2009 most of the kernels include address space layout randomization (ASLR), enhanced memory protection and other extensions making such attacks much more difficult to arrange.

A new area of concern identified in 2007 is that of cross-platform viruses, driven by the popularity of cross-platform applications. This was brought to the forefront of malware awareness by the distribution of an OpenOffice.org virus called Badbunny.

"What makes this virus worth mentioning is that it illustrates how easily scripting platforms, extensibility, plug-ins, ActiveX, etc, can be abused. All too often, this is forgotten in the pursuit to match features with another vendor... [T]he ability for malware to survive in a cross-platform, cross-application environment has particular relevance as more and more malware is pushed out via Web sites. How long until someone uses something like this to drop a JavaScript infector on a Web server, regardless of platform?"[6]

As is the case with any operating system, Linux is vulnerable to malware that tricks the user into installing it through social engineering. In December 2009 a malicious waterfall screensaver was discovered that contained a script that used the infected Linux PC in denial-of-service attacks.[7] 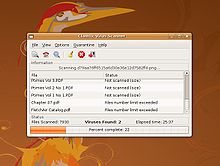 The ClamTk GUI for ClamAV running a scan on Ubuntu 8.04 Hardy Heron

There are a number of anti-virus applications available for Linux, most of which are designed for servers, including:

The following is a partial list of known Linux malware. However, few if any are in the wild, and most have been rendered obsolete by Linux updates. Known malware is not the only or even the most important threat: new malware or attacks directed to specific sites can use vulnerabilities previously unknown to the community or unused by malware.