The Rhine Gorge at Oberwesel

a 17th-century engraving of Oberwesel by Wenceslas Hollar

Oberwesel is a town on the Middle Rhine in the Rhein-Hunsrück-Kreis (district) in Rhineland-Palatinate, Germany. It belongs to the Verbandsgemeinde of Sankt Goar-Oberwesel, whose seat is in the town.

Oberwesel lies on the river Rhine’s left (west) bank in the Rhine Gorge, a UNESCO World Heritage Site, between the neighbouring towns of Sankt Goar and Bacharach.

The town is made up of several Stadtteile, namely the main centre, also called Oberwesel, and the outlying centres of Engehöll, Dellhofen and Langscheid.

As in many of the region’s towns, Oberwesel quite possibly had its beginnings as a Celtic settlement, named Vosavia or Volsolvia. The Romans later maintained a horse-changing station with a hostel here. After the fall of the limes, Oberwesel became a Frankish royal holding with a royal estate. The Wesel Estate passed under Emperor Otto I in 966 to the Archbishopric of Magdeburg. In 1220, Emperor Frederick II dissolved the pledge and Oberwesel became a free imperial city. In 1255, Oberwesel became a member of the Rhenish League of Towns (Rheinischer Städtebund), but in 1309, it lost its status as a free imperial city and fell under the lordship of the Electorate of Trier, to which it belonged until Secularization after the French Revolutionary Wars in 1802. In the so-called Weseler Krieg (“Wesel War”) in 1390 and 1391, the town tried yet again to turn over a new leaf, but after a successful siege by Archbishop of Trier Werner von Falkenstein, it had to back down.

Winegrowing, fishing, trade and handicrafts helped the town gather enough wealth to begin work on the town walls in 1220, building them in three phases from then until the mid 14th century. The town’s importance in the Middle Ages can be gathered from the two great ecclesiastical foundations that it harboured (Our Lady’s – or Liebfrauen in German – and Saint Martin’s), as well as the two monasteries and the Beginenhof. All together, nine monasteries had sizeable commercial holdings in town. 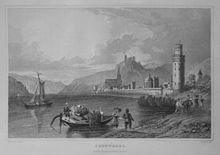 View of the town from 1832, steel engraving after Tombleson 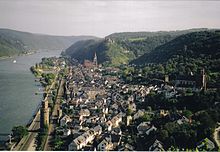 In 1689, in the Nine Years' War (known in Germany as the Pfälzischer Erbfolgekrieg, or War of the Palatine Succession), Oberwesel was destroyed for the first time, by soldiers of the First French Empire. In 1794, the town was occupied by French Revolutionary troops and in 1802 was annexed by France. After the Congress of Vienna, Oberwesel became, along with the rest of the Rhine’s left bank, Prussian.

“Saint Werner’s Chapel” on the side of the town wall facing the Rhine was renovated in 2001. It was consecrated to the former saint, Werner of Oberwesel. In iconography, Werner was shown with a winegrower’s billhook, a shovel and a pan as attributes, and was said to be the patron saint of winemakers. According to a blood libel, 16-year-old Werner was said to have been murdered on Maundy Thursday 1287 in Oberwesel by local Jews who were thought to have wanted to use his blood in their Passover rituals. A 14th-century Latin chronicle reports of an alleged host desecration: Jews from local communities supposedly hung Werner up by the feet to rob him of a piece of sacramental bread that he was about to swallow. The Jews then supposedly threw him in the Rhine. At the spot on the riverbank in Bacharach where his body washed up, the Gothic, Rheinromantik Saint Werner’s Chapel was built. When word of the alleged ritual murder spread, antisemitic mobs rose up and carried out pogroms, destroying not only Jewish communities on the Middle Rhine, but also up the Moselle and down on the Lower Rhine, too. In folk Christianity, the Cult of Werner arose, and it was only stricken from the calendar of the Diocese of Trier in 1963. Heinrich Heine treated the legend in his fragmentary tale, Der Rabbi von Bacherach.[2]

From 7 November 1970, the town formed with the municipalities of Damscheid, Dellhofen, Langscheid, Laudert, Niederburg, Perscheid, Urbar and Wiebelsheim the Verbandsgemeinde of Oberwesel. In the course of administrative restructuring in Rhineland-Palatinate, the new Verbandsgemeinde of Sankt Goar-Oberwesel was formed out of the towns of Sankt Goar and Oberwesel on 22 April 1972, with the administrative seat at Oberwesel. On 17 March 1974, the formerly self-administering municipalities of Langscheid, Dellhofen and Urbar were amalgamated with Oberwesel, although on 13 June 1999, Urbar once again became self-administering.

The council is made up of 20 council members, who were elected by proportional representation at the municipal election held on 7 June 2009, and the honorary mayor as chairman.

The municipal election held on 7 June 2009 yielded the following results[3]:

Oberwesel’s mayors since the Second World War have been:

The town’s arms might in English heraldic language be described thus: Or an eagle displayed sable armed and langued gules.

From 1237 to 1309, the town was a free imperial city. Ever since, it has borne the Imperial Eagle as a charge in the town seal and the civic coat of arms.

The town’s colours are black and yellow.

The following are listed buildings or sites in Rhineland-Palatinate’s Directory of Cultural Monuments:[5] 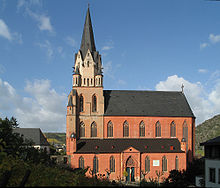 Oberwesel, Liebfrauenstraße 1: Church of Our Lady 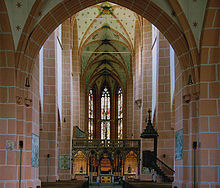 Church of Our Lady – inside 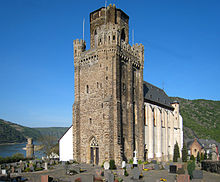 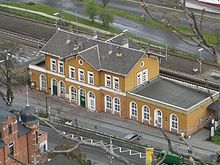 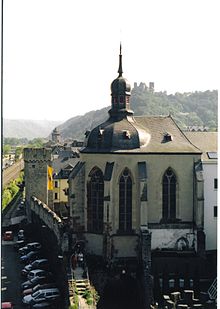 Further information about buildings and sites

The town wall, which was built in the early 13th century and some of whose parts are open to the public, was expanded and strengthened in the 14th century, and with 16 defensive towers – among them the Hospitalgassenturm (“Hospital Lane Tower”), the Steingassenturm (“Stone Lane Tower”), the Katzenturm (“Cats’ Tower”) and the Ochsenturm (“Ox’s Tower”), which is crenellated and has an octagonal top tower, making the whole what is known in German as a Butterfassturm, or “butter churn tower” – is the best preserved girding wall anywhere on the Rhine Gorge. There was planning to open further sections to the public in 2006.

“Saint” Werner’s Chapel is nowadays more properly known as the Mutter-Rosa-Kapelle, since its consecration to Werner has been rescinded and Werner has been stricken from the roll of saints. The chapel is now named after Rosa Flesch, the founder of a Franciscan order in the 19th century. Physically, it actually consists only of the quire of the chapel attached to the hospital, which itself was destroyed in 1689.

Building work on the Church of Our Lady (Liebfrauenkirche, or Pfarrkirche Liebfrauen as it is styled above) began in 1308. In 1331, the church was consecrated and it was completed in 1375. It was built on the spot once occupied by another church, which was first mentioned in 1213. From the old church, the new one took over an endowment for secular clergy (as opposed to regular clergy). Given its architecture and appointments (golden altar, rood screen, wall paintings), it is among the Rhineland’s most important Gothic churches.

Saint Martin’s Church, too, is a Gothic building that arose on a foregoing church’s old site. It was built in 1350, but was not finished owing to strained finances. The tower, which in the Wesel War was incorporated into the town wall as a defensive structure, is an illustrative example of ecclesiastical defensive architecture in the Rhineland. Much of the Gothic appointments has been destroyed. Preserved, however, are a few wall paintings from about 1500 to 1600.

The Minorite monastery was a Franciscan institution founded in 1242 and dissolved in 1802 by Napoleon. In the great town fire of 1836, it was destroyed, and has been a ruin ever since.

Within the Middle Rhine wine region, Oberwesel is one of the biggest winegrowing centres. The winemaking appellation – Großlage – of Schloss Schönburg encompasses 72 ha. Individual winemakers within this appellation – Einzellagen – are Sieben Jungfrauen, Oelsberg, Bienenberg, St. Martinsberg, Goldemund, Bernstein and Römerkrug. The vineyards are steeply terraced and 80% of the area is planted with Riesling and 20% with other white grape varieties (Müller-Thurgau, Kerner, Pinot blanc) and less often with red varieties (Pinot noir, Dornfelder). All kinds of wine (mild, half-dry and dry) and quality levels (Prädikat Kabinett to the odd ice wine) are produced. Recently in the Oelsberg vineyards, some light Flurbereinigung was undertaken, and the now newly planted vineyards have been provided with an irrigation facility. This was meant to safeguard this traditional Einzellage, for not only will it spare the winemakers some work, but it will also ensure good yields even in dry summers.

Some of the 30 or so winemaking estates in town have been under family ownership for more than 200 years; some also keep wine bars in the town.