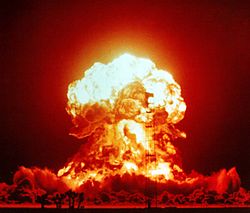 A 23 kiloton tower shot called BADGER, fired on April 18, 1953 at the Nevada Test Site, as part of the Operation Upshot-Knothole nuclear test series.

A nuclear explosion occurs as a result of the rapid release of energy from an intentionally high-speed nuclear reaction. The driving reaction may be nuclear fission, nuclear fusion or a multistage cascading combination of the two, though to date all fusion based weapons have used a fission device to initiate fusion, and a pure fusion weapon remains a hypothetical device.

In 1963, the United States, Soviet Union, and United Kingdom signed the Limited Test Ban Treaty, pledging to refrain from testing nuclear weapons in the atmosphere, underwater, or in outer space. The treaty permitted underground tests. Many other non-nuclear nations acceded to the Treaty following its entry into force; however, three nuclear weapons states have not acceded: France, China, and North Korea.

The primary application to date has been military (i.e. nuclear weapons). However, there are other potential applications, which have not yet been explored, or have been considered but abandoned. They include

Nuclear weapons are largely seen as a 'deterrent' by most governments; the sheer scale of the destruction caused by a nuclear weapon has prevented much serious consideration of their use in warfare.

In the history of warfare, two nuclear weapons have been detonated—both by the U.S. in World War II. The first event occurred on the morning of 6 August 1945, when the United States dropped a uranium gun-type device code-named "Little Boy" on the Japanese city of Hiroshima. The second event occurred three days later when, again, the United States dropped a plutonium implosion-type device code-named "Fat Man" on the city of Nagasaki. These bombings resulted in the immediate deaths of around 120,000 people and more over time, because of the nuclear radiation. The use of these weapons was and remains controversial. (See Atomic bombings of Hiroshima and Nagasaki for a full discussion).

Nuclear tests are experiments carried out to determine the effectiveness, yield and explosive capability of nuclear weapons. Throughout the twentieth century, most nations that have developed nuclear weapons have staged tests of them. Testing nuclear weapons can yield information about how the weapons work, as well as how the weapons behave under various conditions and how structures behave when subjected to nuclear explosions. Additionally, nuclear testing has often been used as an indicator of scientific and military strength, and many tests have been overtly political in their intention; most nuclear weapons states publicly declared their nuclear status by means of a nuclear test.

The dominant effects of a nuclear weapon (the blast and thermal radiation) are the same physical damage mechanisms as conventional explosives, but the energy produced by a nuclear explosive is millions of times more per gram and the temperatures reached are in the tens of megakelvins. Nuclear weapons are quite different from regular weapons because of the huge amount of explosive energy they can put out and the different kinds of effects they make, like high temperatures and nuclear radiation.

The devastating impact of the explosion does not stop after the initial blast, as with regular explosives. A cloud of nuclear radiation travels from the epicenter of the explosion, causing an impact to lifeforms even after the heat waves have ceased. The radiation can cause genetic mutation, radiation poisoning, and death.