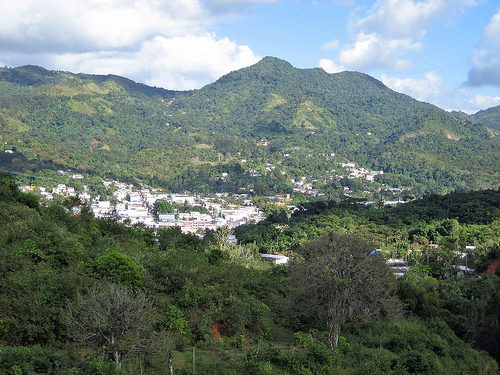 image_caption= View of Adjuntas from a nearby mountain. |

Adjuntas IPA|/að'xun.tas/, is a small mountainside municipality in located central midwest of the island on the Central Mountain range (La Cordillera Central), north of Yauco, Guayanilla and Peñuelas; southeast of Utuado; east of Lares and Yauco; and west of Ponce. Adjuntas is spread over 16 wards and Adjuntas Pueblo (the downtown area and the administrative center of the city). Adjuntas is about two hours by car westward from the capital, San Juan.

Adjuntas is nicknamed "the of Puerto Rico", because of its relatively chilly weather. Many Puerto Rican mountain towns have colder weather than the rest of the island; Adjuntas is no exception: the average yearly weather is 72 degrees . The cool weather attracts a good number of island tourists during the summer months. The town has a small hotel named Monte Rio and a good size "parador", or country inn, called Villa Sotomayor. It also has the distinction of being the postal area with the lowest numerical in the United States Postal Service (00601).

Adjuntas was founded August 11, 1815, by Diego Maldonado, gaining administrative independence from . It was one of the main cities where the , , and other settled. Many of these families were of the Torres, or , and Bennazzar families among others. and settled there too.

After the mid 1800s, Adjuntas welcomed many immigrants from the Mediterranean islands and . Some of them established coffee plantations. During the last decades of XIX century, the fine coffee produced in Adjuntas was exported to Europe, United States and even the Vatican.

It was proclaimed "villa", or a first order municipality, by the Monarchy in 1894.

Adjuntas was occupied by the forces during the of 1898 and was visited by President in 1906.

The discovery of rich deposits of copper, gold and other minerals during the 1960s motivated some local community and environmental leaders to oppose the mining. By the 1990s, they convinced the Puerto Rican government to take a stand against the mining industry, on behalf of conservation. Today, instead of mining, with the leadership of [http://www.casapueblo.org/ Casa Pueblo] , a community organization, Adjuntas leads the preservation of natural resources movement in Puerto Rico.

Adjuntas climate is subtropical high elevation with cool temperatures year round, cold nights in the winter. Winter average low temperature is 45°F in the town and 40°F n the forest, in the daytime high around 70 in the town in 62-69 in mountain,in winter rainy day a high only in the 50s. Summer is warm (79°-84°F) in the daytime and cool at nighttime (60°-63°F).

Adjuntas' main industry is the growing of tropical crops such as s, and and .

The main road is Puerto Rico 10, that connects the cities of Ponce in the south and in the north. In addition, there is a small airport that caters to private airplanes.

The town has a professional volleyball team called Gigantes de Adjuntas.The team won the title in 1973. They have come to be known as "Los Inmortales" (The Immortals).

*Major , DDS, odontologist (dentist), scientist and a Major in the U.S. Army who discovered the which causes dental caries.
*Dr. , physician and former President of the
*Dr. Arístides Moll (1880-1965), physician, writer, poet and Secretary of the Pan American Sanitary Bureau of the
*Rafael Bosch, lawyer, poet, writer and legal advisor of the Committee of Insular Affairs of the
*Josefina Moll, writer
*Pelegrín López de Victoria (1850-1942), writer
*Rafael de Jesús Cordero (1897-1974), economist, professor and co-founder of the Department of Economy of the . First Puerto Rican to hold the position of Auditor of Puerto Rico, named by President in 1943. First Comptroller of .
*Ignacio Rivera, corporate and criminal lawyer, Federal prosecutor, intelligence agent for the , radio news commentator and author ("El Presidente se viste de blanco"). Made an honorary member of the local troop of the .
*Alexis Massol, is the founder and director of Casa Pueblo of Adjuntas, Puerto Rico, a self-managed community organization that proposes and develops plans to protect the environment, affirm cultural and human values, and create sustainable economic alternatives. Goldman Prize
*Candido Berio, Reggaeton Singer, model, and member of the ToTo Family.
*María de Lourdes Santiago Negrón- Senator 2004-
*During the last years of his life, made his residence in Adjuntas.

Adjuntas was featured in the March 2003 issue of in an article about Puerto Rican lifestyles.