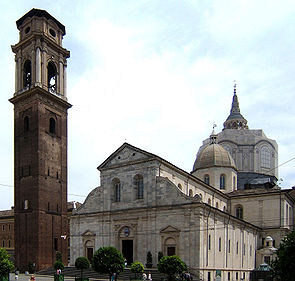 Exterior view of the church.

Turin Cathedral (Italian: Duomo di Torino) is the major Roman Catholic church of Turin, northern Italy. Dedicated to Saint John the Baptist (Italian: San Giovanni Battista), it was built during 1491-1498 and it is adjacent to an earlier campanile (1470). The Chapel of the Holy Shroud, the current resting place of the Shroud of Turin, was added to the structure in 1668-1694.

The church lies in the place where the theatre of the ancient Roman city was located. The original Christian sacred house included three churches, dedicated to the Holy Saviour, Saint Mary of Dompno (Santa Maria de Dompno) and, the main of three, St. John the Baptist. According to some sources, the latter's consecration was carried on by Agilulf, the Lombard King of northern Italy from 591 to 613.[1] Here, in 662, Garibald, Duke of Torino was assassinated in the church by a follower of Godepert, whose murder Garibald is believed to have had a part in.

The three churches were demolished between 1490 and 1492. The new cathedral, again entitled to St. John the Baptist, was begun in 1491 under design of Amedeo de Francisco di Settignano, also known as Meo del Caprino, who finished it in seven years. The bell tower, however, remained the one erected in 1469, which is still visible today. Filippo Juvarra brought some modifications in the 17th century. Pope Leo X officially confirmed it as metropolitan see in 1515.

A project for an enlargement of the cathedral, in order to create a more luxurious seat for the Shroud, was launched in 1649, when Bernardino Quadri arrived in Turin from Rome at the court of Duke Charles Emmanuel II of Savoy. Quadri's design was based on a previous project by Carlo di Castellamonte, with an oval chapel behind the choir. In 1667 Guarino Guarini was called in to complete the project. The dome, whose works dragged for 28 years, was completed in 1694 under the direction of Marie Jeanne of Savoy, Charles Emmanuel II's widow.

The cathedral is the burial place of Blessed Piergiorgio Frassati (1901–1925), Turin native, avid athlete, and benefactor of the poor, called the "saint for youth of the Third Millennium." He was beatified by John Paul II in 1990.

While the chapel of the Holy Shroud behind the cathedral was undergoing renovation during 2009, the Shroud was kept in a small chapel within the cathedral.