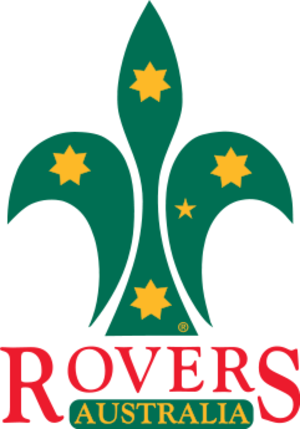 Rovers, formerly Rover Scouts, is the fifth and final section of , and began in 1918. Rovers are aged between 17 (generally 18) and 26 years of age and are organised into local Crews, which can be associated with a Scout Group or operate as a stand-alone Crew. Crews accept anyone interested in taking up Rovering, whether or not they have been in Scouts before. The section is based on Baden-Powell's book "Rovering to Success" and the theme of knighthood. Rovers are actively encouraged to become better citizens through taking part in Scouts Australia's nationally accredited training programs, developing leadership skills, participating in outdoor activities, attending national and international events, providing service to the community and generally building their life skills.

Rovers is organised from a Branch (state) level down - and unlike most of the other sections is very active at a Branch level. The larger states are split into Regions, which in turn are made up of Crews. Victoria has the largest Rover population, with around 100 [http://www.vicrovers.com/index.php?categoryid=53 Crews] and there are over 300 Crews Australia-wide.

Australian Rovers run an every three years. The largest event in Australian Rovering is Victoria's annual Surfmoot [http://www.surfmoot.com] , run across the Australia Day weekend each January.

On the old khaki uniform, Rovers were distinguished by green epaulettes, but with the new uniform, Rovers are now distinguished by a red shoulder panel on the blue uniform shirt, green badges on each shoulder, as well as the traditional 'knot' of five ribbons (tan for Joeys, yellow for Cubs, green for Scouts, maroon for Venturers and red for Rovers) - this distinguishes Rovers from every other section. Rover fought hard against the adoption of the new uniform and won the right to continue to wear their green "epaulettes", although now they are simply a badge sewn on the shoulder panel.

A Rover Crew is run by its members, led by an elected committee. The committee normally consists of a Crew Leader, Deputy Crew Leader, Secretary and Treasurer but large Crews may also add a Fundraiser, a Quartermaster and other roles. Rovers are adults and make their own decisions but sometimes Crews wish to have input from people over 26, called Rover Advisers. These people are selected by the Crew because of their previous experience, both in Scouting and in life.

While allowing District Rover Forums in some states (to organise promotions and social events only), the next step in the Rover Government ladder is the Region Rover Council. These bodies run Rovering in their geographic areas and are typically based on but not the same as Regions in the other sections of the Scouting Movement. These regions also run various Branch events.

Some states have a Lones Rover Crew, which accept members from country or other areas where the nearest Rover Crew is further than practical travel allows or who cannot attend a regular Rover Crew due to shiftwork or military service.

The Rover award scheme leads to the Baden-Powell Scout Award - the highest youth award in Australian Scouting. This begins with Squire Training - the training required to be completed before being invested as a Rover Knight. Following this is the Rover Skills badge - basic camping, showing an understanding of the Scouting Fundamentals and providing 10 hours of service, although this badge can be completed by Squires, it is uncommon for a Squire to be awarded the badge without finishing their Crew's Squire Training Program first.

Rover Scout Motorsport clubs exist in several states and are is the bodies responsible for the safe operation of Rover . They are -affiliated racing clubs, with strict drink-driving, safety and racing policies. [ [http://rovers.com.au/NewsArticles/RSMinCAMSmag.pdf RSM in CAMS Magazine] , "4138 Scouts get a taste of motor sport!", p38, Autumn 2007, Accessed 23/6/7] They are operated by an elected and assigned team of Rovers and are under the control of that states Branch Rover Council. They oversee events like Mudbash, [ [http://www.mudbash.com/ Mudbash] ] BuggyBash, [ [http://www.buggybash.com/ Buggybash] ] Sandblast [ [http://rovers.sa.scouts.com.au/sandblast Sandblast] ] and Lead Foot Challenge.

All Rover Motorsport activities were stopped in the early 2000's because of a loss of insurance, but a new affiliation with the led to the resumption of Rover Motorsport.

Today, the Rover section owns many properties built and funded by the Rovers (including several ski lodges and the largest freehold (not rented for a nominal fee like many Scout parks) scout park in the southern hemisphere, Mafeking Rover Park in Victoria).